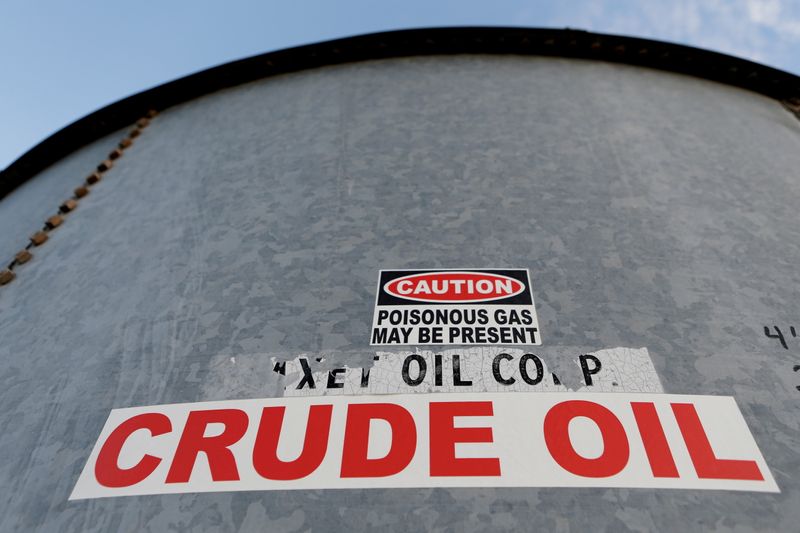 © Reuters. FILE PHOTO: A sticker reads crude oil on the side of a storage tank in the Permian Basin in Mentone, Loving County, Texas, U.S. November 22, 2019. REUTERS/Angus Mordant/File Photo

SINGAPORE (Reuters) – Oil prices fell for a third day on Wednesday on mounting concerns that the increasing spread of the Delta variant of the coronavirus in top consuming countries will cut fuel demand.

Both futures fell on Tuesday to their lowest since July 21 before regaining some ground by the close.

The United States and China, the world’s two biggest oil consumers, are grappling with rapidly spreading outbreaks of the highly contagious Delta variant that analysts fear will limit fuel demand at a time when it traditionally rises in both countries.

“Seasonal weakness in economic activity amid rising cases of the Delta variant continue to weigh on sentiment,” ANZ said in a note.

“Nearly half of China’s provinces have been being gripped by the latest outbreak. This comes as the summer travel season hits its peak. This is likely to see demand come under pressure.”

In China, the spread of the variant from the coast to inland cities has prompted authorities to impose strict measures to bring the outbreak under control.

Still, bubbling geopolitical tensions in the Gulf may offset the demand concerns.

This is the second attack on a tanker since Friday in the region, which includes the Strait of Hormuz oil export chokepoint. The UK and the U.S. are also blaming Iran for the earlier incident, in which drones crashed into the vessel and killed two sailors.

Gasoline inventories fell by 5.8 million barrels and distillate stocks fell by 717,000 barrels, the data showed, according to the sources, who spoke on condition of anonymity.