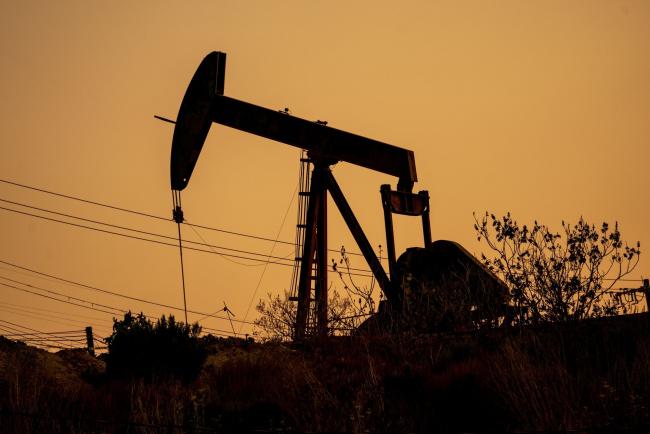 © Bloomberg. An oil pump jack operates at the Inglewood Oil Field in Culver City, California, U.S., on Sunday, July 11, 2021. Oil dipped after a two-day gain as investors assessed the demand outlook amid a resurgence of Covid-19 in many regions. Photographer: Kyle Grillot/Bloomberg

(Bloomberg) — Oil tumbled as traders weighed the impact of rising trading costs on the major exchanges while President Joe Biden is set to address the Russia-Ukraine war in Europe.

Futures in New York fell 2.3% after a choppy session on Thursday. The White House and European Union are close to a deal aimed at slashing the region’s dependence on Russian energy, although that may focus primarily on flows of . At the same time, Austria has said it won’t agree to an embargo of Russian oil and gas.

The market is also in the midst of a liquidity crunch, leaving prices vulnerable to big swings. Clearing houses have been increasing margins, effectively making it more expensive to trade the same amount of oil. On Thursday, ICE (NYSE:) raised its margin requirement for futures by 19% after increasing by 32% earlier this month. Gasoil margins increased by 3.5%.

Although many buyers are shunning Russian crude, especially former European purchasers, Asian users may be stepping in to take barrels at discounted rates. China’s refiners are discreetly purchasing cheap Russian oil, traders say, and India processors have also scooped up some of the volumes.

Meanwhile, International Energy Agency members are seeking to reduce their use of Russian oil and gas radically, and the organization is ready to release more oil from emergency stockpiles if needed.

Oil has rallied more than 50% this year, hitting the highest level since 2008 earlier this month, as Russia’s invasion of Ukraine threw global commodity markets into turmoil. The U.S. and U.K. have already moved to bar flows of Russian crude. But there’s greater reluctance among EU members to follow suit given the region’s higher dependence. Trafigura Group forecast this week that crude prices are set to keep rising, potentially hitting $150 a barrel.

Loadings from a Black Sea oil export terminal partially resumed after completely halting Wednesday after storms damaged some of its facilities. Initial expectations were that exports could be cut 1 million barrels a day, further depriving the European market.

In Brussels on Thursday, Biden joined  back-to-back summits with NATO, the Group of Seven and the EU where he called for removing Russia from the G-20. On Friday the U.S. president will visit Poland, which is hosting the biggest number of displaced Ukrainians.

As the war drags on, there’s a growing willingness on both sides to use Russian energy supplies as a weapon. On Wednesday, President Vladimir Putin ordered the nation’s central bank to develop a mechanism to force European customers to pay for Russian natural gas in rubles, spurring a rally in prices. In response, Germany and Italy said efforts to charge in rubles for gas would be a violation of their contracts

(Corrects the increase for gasoil margins in the third paragraph.)