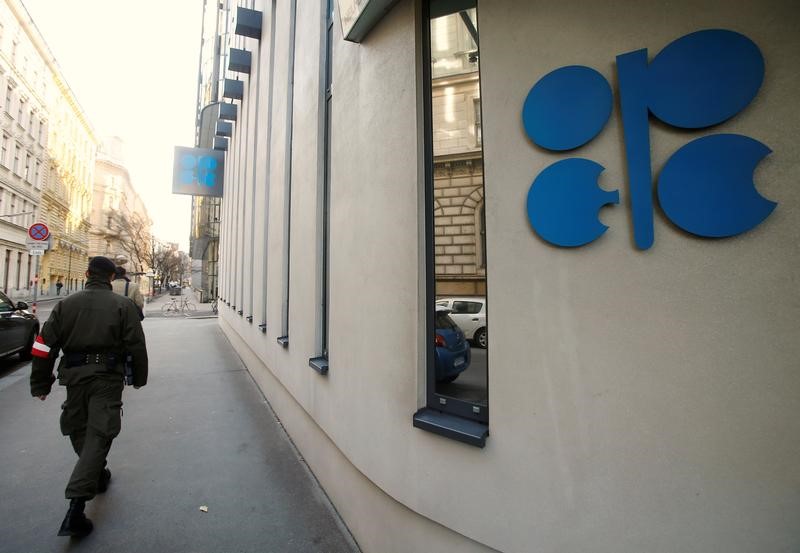 © Reuters. Oil’s Surge Toward $50 Risks Giving OPEC+ Yet Another Headache

(Bloomberg) — With OPEC+ just days from meeting, those countries who favor ratcheting up oil production may be finding some support for their arguments from surging prices.

Headline futures contracts jumped 30% this month with at one point on Wednesday hitting $48.75 a barrel, the highest since March. Critically though, a much more fundamental shift has taken place in the forward curve, which offers clues about traders’ perspectives on supply and demand — both now and in future. Large parts of the curve are now trading in a structure known as backwardation, suggesting a clamor for barrels. Just a week ago, they were in contango and pointing to surplus.

The Organization of Petroleum Exporting Countries and its allies, who will meet on Monday and Tuesday, are already grappling with a difficult market to evaluate. Oil demand has rarely been so volatile. A supply glut — built up when coronavirus first emerged — remains but is being eroded. Adding supplies again in January would risk reversing the strength that has grown in recent weeks.

“The more relaxed ministers feel because prices are rising, the more difficult it can be to achieve consensus on further market stabilization measures,” Standard Chartered (OTC:) analyst Paul Hornsell wrote in a report. The bank sees a 3-month extension of curbs as the market’s minimum expectation when OPEC and its allies meet early next week.

The shift in the forward curve brings another challenge: average Brent prices for 2021 and 2022 are now above $48 a barrel, meaning producers from outside the group can lock in output for years ahead at the best levels in months. Some already are.

The longer OPEC+ keeps supplies constrained, the more support those companies and countries get.