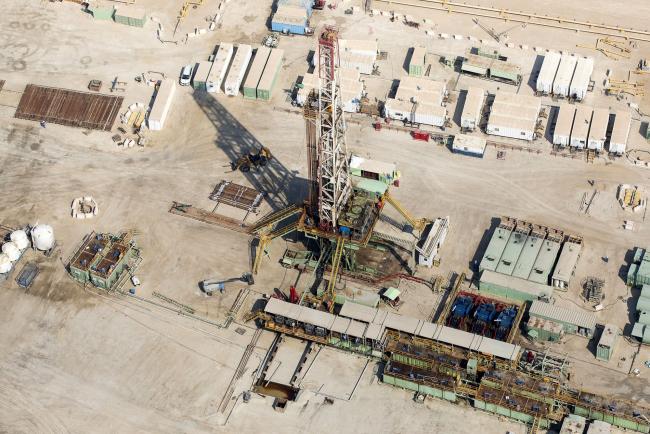 © Bloomberg. An oil drilling rig stands one of the Causeway islands in the Manifa offshore oilfield, operated by Saudi Aramco, in Manifa, Saudi Arabia, on Wednesday, Oct. 3, 2018. Saudi Aramco aims to become a global refiner and chemical maker, seeking to profit from parts of the oil industry where demand is growing the fastest while also underpinning the kingdoms economic diversification.

(Bloomberg) — OPEC once again cut estimates for the amount of crude it will need to provide in the coming year as the return of measures to contain the global pandemic hits fuel use.

The revision illustrates why the group’s de facto leader Saudi Arabia has said that the Organization of Petroleum Exporting Countries and its allies may adjust plans to restore supply when they meet later this month. The virus’s effects will “linger” next year even with the announcement of a vaccine breakthrough, the group said.

“The oil demand recovery will be severely hampered and sluggishness in transportation and industrial fuel demand is now assumed to last until mid-2021,” OPEC’s Vienna-based research department wrote in its latest monthly report.

The group reduced forecasts — from estimates in its previous report — for the volume of crude it needs to pump this quarter by 960,000 barrels a day to 26.51 million a day. This follows significant downgrades in the past two months.

While the cartel is actually pumping 2.1 million barrels a day less than the amount required, the revisions mean it’s not whittling away surplus oil stockpiles as quickly as previously estimated.

The changes also mean if OPEC and its allies did proceed with their scheduled supply boost of 2 million barrels a day in January, the coalition would deplete world stockpiles during the first quarter by just a few hundred thousand barrels a day.

The 23-nation network had aimed to ease some of the vast production curbs made, to offset this year’s demand losses, having managed to partly revive supplies over the summer. It’s currently keeping about 7.7 million barrels a day offline, or roughly 8% of global output.

But officials from across the OPEC+ group have indicated over the past week that they’re reconsidering the planned increase.

Saudi Arabian Energy Minister Prince Abdulaziz Bin Salman said on Nov. 9 that the producers can “tweak this agreement” as necessary, following similar comments from Algeria and the group’s secretary-general.

OPEC lowered projections for the “call” on its for almost every quarter through to the end of 2021. The biggest reduction was in the fourth quarter of next year, which was cut by 1.18 million barrels a day.

Oil’s rally of almost 14% this week amid the announcement of Pfizer Inc (NYSE:).’s vaccine has almost certainly eased some of the pressure on OPEC+ ministers. Yet at $45 a barrel in London, prices remain far below the levels most members need to cover government spending, and the organization’s report shows why further price gains could be constrained.