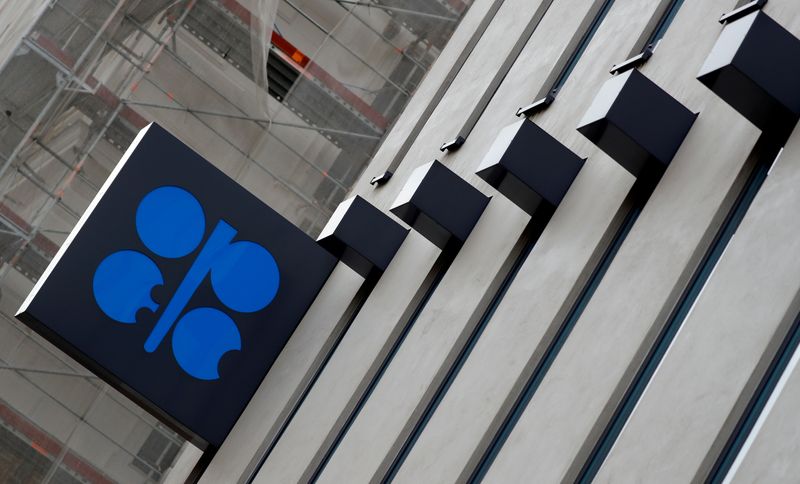 © Reuters. FILE PHOTO: The logo of the Organization of the Petroleum Exporting Countries (OPEC) is seen outside their headquarters in Vienna

LONDON (Reuters) – OPEC oil output has risen for a fourth month in October, a Reuters survey found, as a restart of more Libyan installations and higher Iraqi exports offset full adherence by other members to an OPEC-led supply cut deal.

The 13-member Organization of the Petroleum Exporting Countries has pumped 24.59 million barrels per day (bpd) on average in October, the survey found, up 210,000 bpd from September and a further boost from the three-decade low reached in June.

An increase in OPEC supply and a new hit to demand as coronavirus cases rise have weighed on oil prices, which have fallen 8% in October to near $37 a barrel. This puts pressure on OPEC and allies, known as OPEC+, to postpone a planned January 2021 supply boost, some analysts say.

“Oil demand is currently not supportive,” said Stephen Brennock of broker PVM. “At the bare minimum, OPEC+ will have to roll over its current production levels until the end of March.”

Libya is one of the OPEC members exempted from a deal by OPEC+ to curb supply.

OPEC+ made a record cut of 9.7 million bpd, or 10% of global output, from May as the pandemic destroyed demand. Since August, the group has been pumping more as the cut tapered down to 7.7 million bpd, of which OPEC’s share is 4.868 million bpd.

Another 2 million bpd increase is scheduled in January, although Saudi Arabia and Russia are in favour of continuing with the current cuts, OPEC sources said.

In October, OPEC countries bound by the deal have delivered 101% of the pledged reduction, the survey found, steady from September.

October’s increase means OPEC is pumping about 2.2 million bpd more than June’s figure, which was the lowest since 1991.

Libyan production is rising after Eastern Libyan commander Khalifa Haftar said on Sept. 18 his forces would lift their eight-month blockade of oil exports.

The survey found output increased by 250,000 bpd in October, a faster rebound than some analysts and OPEC officials expected.

The second-largest increase came from Iraq, which lifted exports from its southern terminals. Compliance was still almost 100%, higher than Iraq managed in earlier OPEC+ deals.

There was little change in supply from Iran, which is also exempt from the OPEC cut, after an increase in September in defiance of U.S. sanctions. Exports have been slightly lower in October, the survey found.

Among the OPEC members lowering output, the biggest reduction came from the United Arab Emirates, which had pumped above its quota in August. Industry sources said the reduction suggests the UAE is still compensating for its August increase.

The Reuters survey aims to track supply to the market and is based on shipping data provided by external sources, Refinitiv Eikon flows data, information from tanker-trackers such as Petro-Logistics and Kpler, and information provided by sources at oil companies, OPEC and consultants.