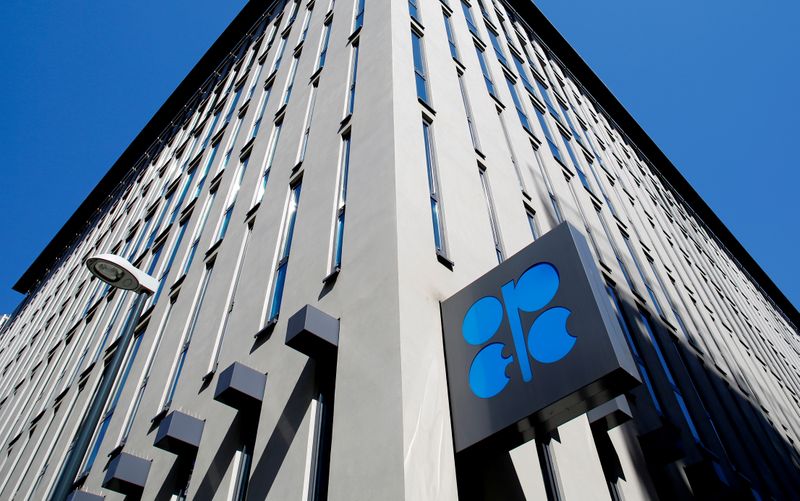 © Reuters. FILE PHOTO: The logo of the Organisation of the Petroleum Exporting Countries (OPEC) sits outside its headquarters in Vienna

MOSCOW/DUBAI (Reuters) – A panel of OPEC+, a group of leading oil producing countries, will hold informal online talks on Saturday prior to meetings scheduled for next week, a letter seen by Reuters showed and source with the knowledge of the matter said.

OPEC+ is debating whether to ease oil output cuts from Jan. 1, as it previously agreed, or to continue producing at the same rate amid sluggish oil demand and the fallout from the coronavirus pandemic.

Novak was energy minister until earlier this month, leading Moscow’s efforts to forge close ties with the Organization of the Petroleum Exporting Countries and clinch the deal on output cuts.

Saudi Arabia will be represented by its Energy Minister, Prince Abdulaziz bin Salman.

OPEC+ will meet on Nov. 30 and Dec. 1 to decide output policy for next year.

The group was due to raise output by 2 million barrels per day in January – about 2% of global consumption – as part of a steady easing of record supply cuts implemented this year.

But with demand for fuel weakening because of a second wave of the pandemic, OPEC+ has been considering delaying the increase or even making further cuts.

On Thursday, Nigeria’s President Muhammadu Buhari said his country needed to produce more oil to support its economy and build infrastructure for its sizeable population, many of whom are poor.

He urged OPEC to consider that when sharing oil production cuts, according to a statement from his office.

Nigeria, earlier this month, asked OPEC to reevaluate its oil production quota by categorizing its Agbami field as condensate.

Doing so would improve Nigeria’s compliance. Three out of OPEC’s six secondary sources count the stream as crude, with the rest considering it a condensate.

In response, Algeria, which currently holds the OPEC presidency, said any attempt to change oil production quotas could lead to oil market collapse.