Global stocks and futures contracts on the , , and jumped on Monday after AstraZeneca (LON:) its potential COVID-19 vaccine prevents an average of 70% of virus cases.

The news enhances the already positive vaccine results from Pfizer (NYSE:) and Moderna (NASDAQ:) and could reduce the timeframe for the rollout of a global vaccination program.

The increased possibility of an economic recovery at the same time helped drive the price of oil higher. The dollar continued its decline.

In London, AstraZeneca’s shares fell following its positive news, presumably on the maxim “buy the rumor, sell the news.”

Although all four major US contracts rose at least 0.4%, Russell 2000 futures were the strongest on the continued rotation out of tech shares and into sectors sensative to a re-opening economy as well away from mega caps and into small caps.

In Europe, the Index opened higher and continued climbing with the energy and banking sectors outperforming. France’s Credit Agricole (PA:), the world’s largest cooperative financial intuition, opened 2.25% higher and extended gains to 3.7%, the highest since March, on news it agreed to buy Italian lender Credito Valtellinese (MI:) for 737 million euros, or USD$875 million.

Asian indices were all green, though Japanese markets lost out on the positive mood as they were closed for a holiday. South Korea’s outperformed, increasing 1.9%. Hong Kong’s lagged and closed up just 0.1% on renewed US-China tensions.

The White House is 89 Chinese companies it labels “military end-users,” such as aerospace as well as other companies, from having access to US goods and technology. At the same time, a high ranking US Navy admiral —a place China claims as its own—to oversee US military intelligence in the region.

US indices ended last week, except for the which remained in positive territory throughout the week, as reported cases of coronavirus across the globe continued to climb and additional social restrictions were introduced.

Along with the risk-off that decreased appetite for stocks, investors also sold Treasuries. 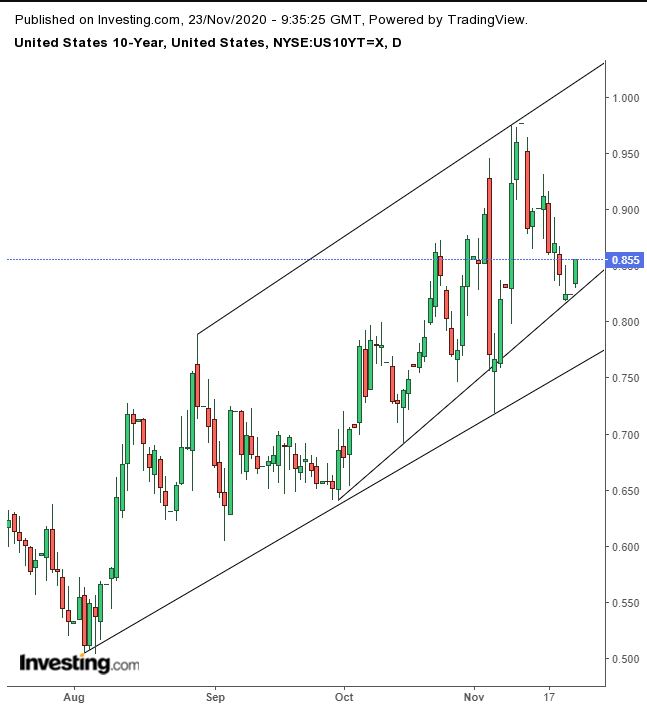 The selloff caused yields, including on the Treasury note, to bounce off a short-term uptrend line within a rising channel, confirming Fridays’ inverted hammer.

The slumped for the seventh day out of eight. It fell to the lowest level since Aug. 31. A further slight decline would bring the greenback to its most depressed levels since Apr. 30, 2018. 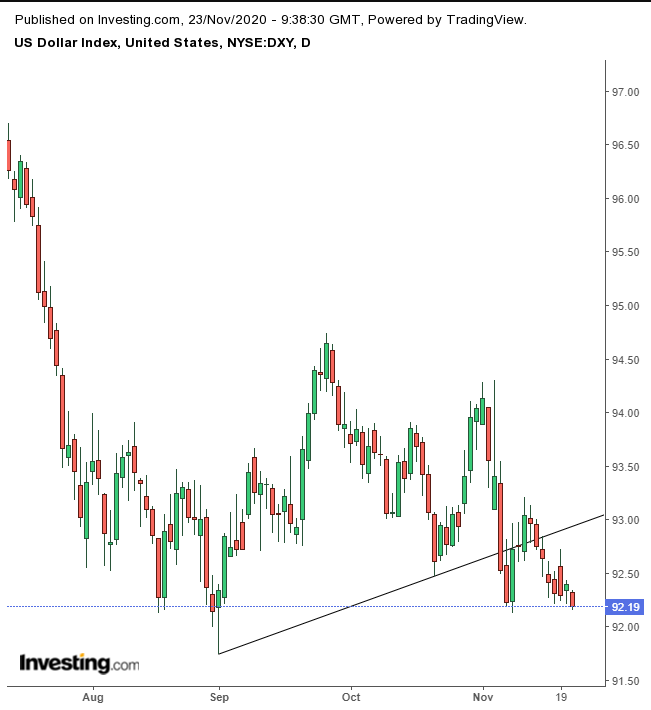 The USD extended the penetration to a H&S continuation pattern that will ensure a resumption of the underlying downtrend.

almost completely erased Sunday’s dip and, at its current price above $18,500 at time of writing, is hovering at 3-year highs. Still, we would be waiting for a substantial correction, before going long.

The news of a third potentially effective vaccine reaffirmed the positive outlook for as the end of lockdowns will increase demand. 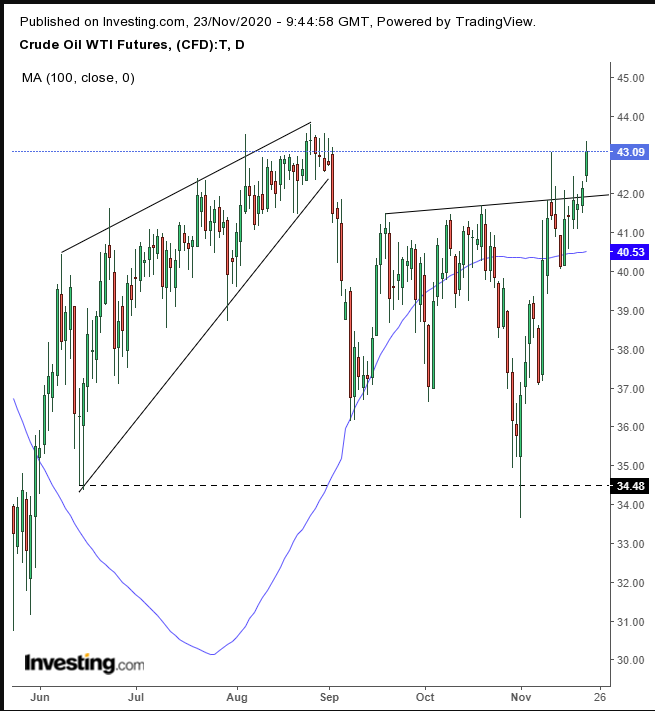 Still, the price found resistance by the Nov. 11 shooting star, which confirmed the bearishness of the preceding rising wedge. However, the wedge’s implied target might have been achieved on Nov. 2, when it fell to its lowest level. Should that be the case, the current upside move could be a bullish breakout. It all rests on the $44 level. If bulls can overtake it, that would demonstrate they’ve absorbed all of the supply.