Contracts on the , , and rebounded on Tuesday on lingering hopes of a breakthrough on a US fiscal aid packaged. However, European markets, including the , were under pressure as a continued increase in coronavirus cases offset positive corporate earnings releases.

S&P futures—which fell overnight on Monday—jumped after a spokesman for US House Speaker, Nancy Pelosi said the divide between the Democrats and Republicans was narrowing.

That positive outlook failed to reach Europe which is besieged by a second wave of the novel virus. Belgium health minister, Frank Vandenbroucke warned of what he characterized as a “tsunami” of new infections. Bars and restaurants there are now closed for four weeks and a curfew has been introduced in an attempt to curtail virus transmission.

Italy added a slew of after registering a new record number of cases, and nine major French cities have mandated 9 pm curfews. The Republic of Ireland will begin severe social restrictions for six weeks on Wednesday and the Czech Republic—with the —is contemplating a countrywide lockdown.

As a result, positive earnings news—normally a boon for stocks, even in the face of broad selloffs and economic contractions—failed to do more than pare some of the losses. Shares in UBS Group AG (SIX:) added just 4.3% after it a 99% surge in quarterly profits, thanks to extreme trading volatility.

Swedish Swedbank (ST:) advanced 0.9% on quarterly net profits that beat estimates due to volatile markets and an increase in the bank’s net commission income. However, Logitech (SIX:) , after its shares leaped a whopping 20.5% to a new all-time high after the computer peripheral maker raised its yearly guidance.

Asia was mixed with Australia’s (-0.7%) underperforming on fears of European lockdowns. South Korea’s (+0.5%) led the rallies on foreign buying, which pushed the to an 18-month high.

The supply-demand picture increases the odds for further strengthening of the Korean currency, which can be seen in the following chart. 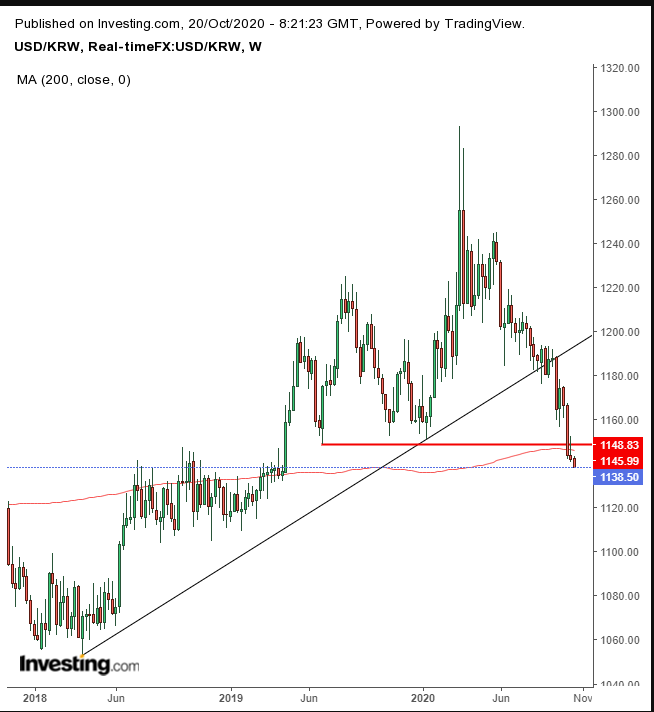 The dollar’s decline versus the won extended its downside breakout, followed by a fall below the 200-weekly MA for the first time since early last year.

On Monday, the dropped 1.6% to its lowest level in almost two weeks. 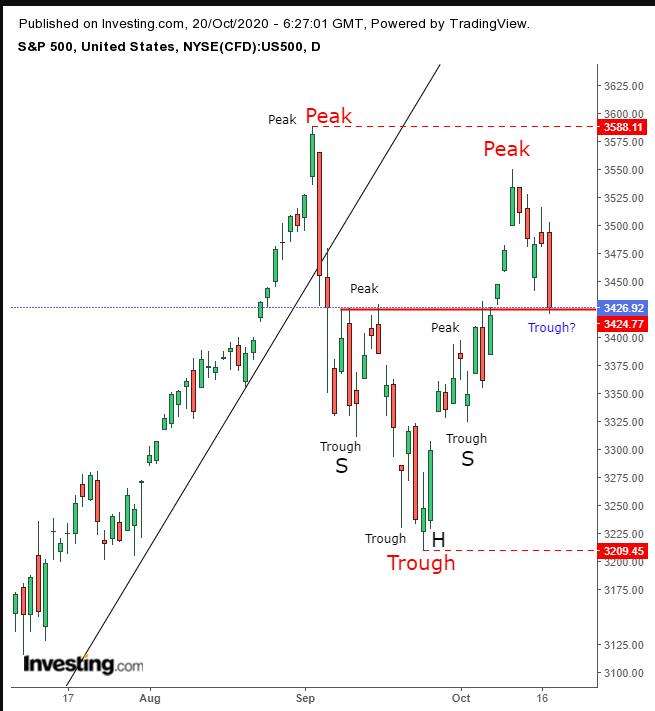 The index found support above the neckline of a short-term H&S bottom, suggesting dip buyers will carry the benchmark on another leg up.

Yields on the Treasury note climbed for the fifth straight session as bond traders continue to believe that a . 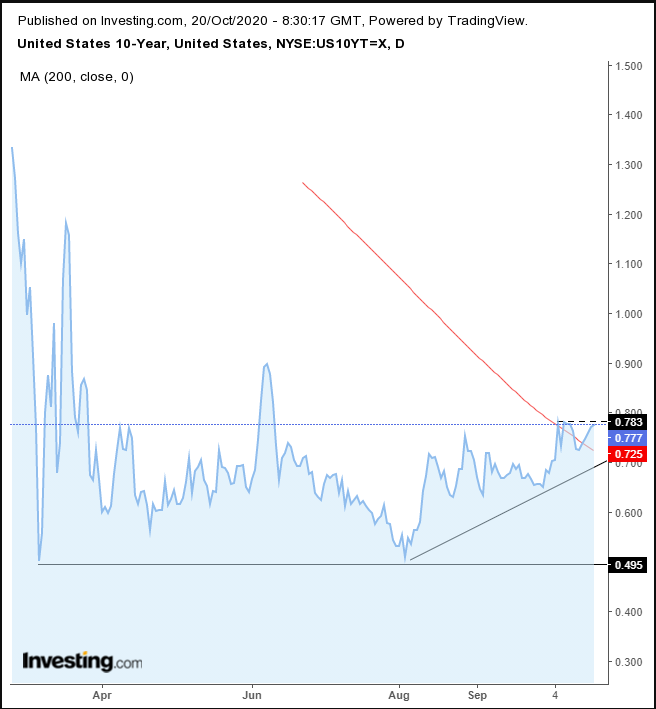 Having tested the all-time low on Mar. 8, yields started taking on the 0.8% high, aiming to extend the rebound from the 0.5% level.

The Treasury sell-off weighed on the for the third straight day. Any economic stimulus would increase the number of dollars in the economy, . 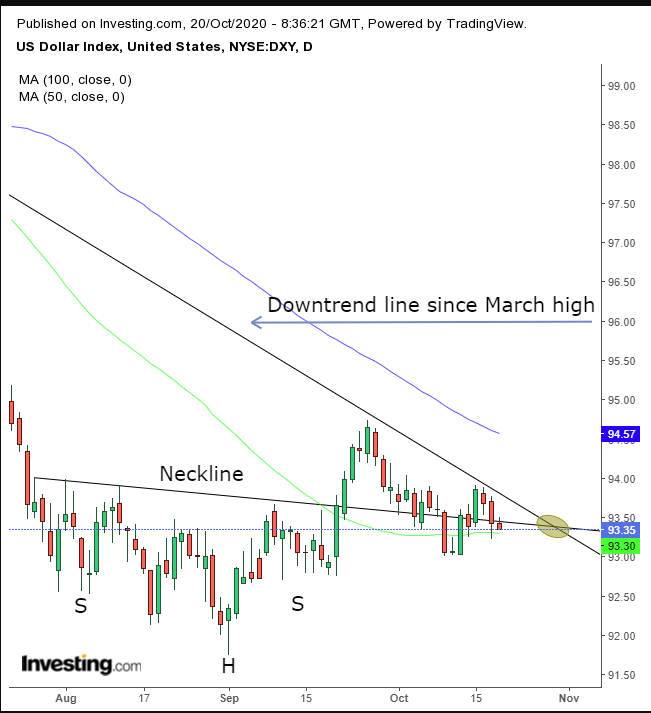 Technically, the greenback struggles between the short and medium terms marked by the converging trendlines and manifested by the support of the 50 DMA versus the resistance of the 100 DMA.

fluctuated and is flat as of the time of writing, despite the weaker dollar but amid a rise in US futures. 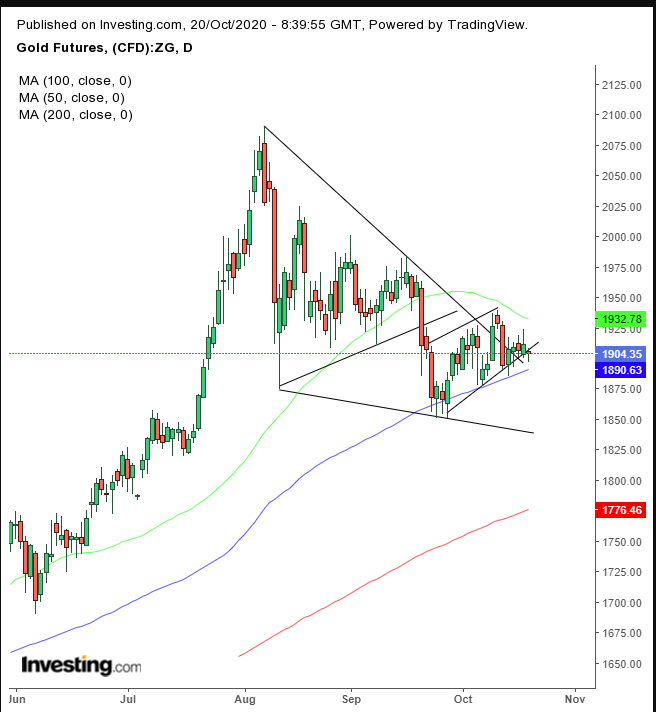 The yellow metal continues to struggle between , awaiting a decisive breakthrough to either follow-through with a bearish symmetrical triangle followed by a bearish flag, or to break upwards, completing a bullish wedge.

On-chain data is showing that long-term holders were selling out, leading some analysts to make bearish calls. 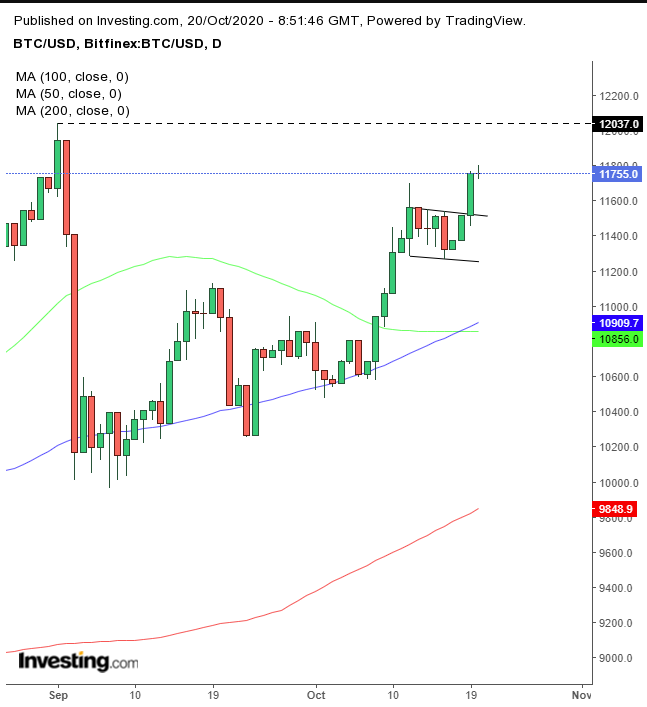 However, we are reiterating our on the cryptocurrency.

declined for the fourth day even after OPEC+ members failed to give definitive guidance on the status of oil production quotas. The second wave of coronavirus is also hampering the demand outlook.