The much-lauded, cyclical rotation out of the technology sector appears to have reversed during Tuesday’s late Asian session. US contracts for the , and the are all down, with only in the green at time of writing.

The move appears to have been spurred by yesterday’s announcement that as of Dec. 21, electric carmaker Tesla (NASDAQ:) will be included in the Index. Shares of Tesla surged over 10% in after-hours trade.

New lockdowns and restrictions hitting the economies of both Europe and the US because of escalating coronavirus cases may also be playing a role in pressuring small caps and value stocks.

Just one day after Moderna (NASDAQ:) dazzled markets with its vaccine’s 94.5% efficacy rate—while also stealing Pfizer’s (NYSE:) thunder—Monday’s rally into industries sensitive to a re-opening economy that would thrive as social restrictions ended, has even as markets digest the possibility of two viable vaccines in the months ahead.

Nonetheless, it remains unclear if the news about the virus, with the US heading toward 12 million cases, gaining about a thousand new COVID cases a day while having already seen over a quarter of a million deaths, is the impetus for the reversed course of the rotation. The driver could be generated by investors’ profit-taking.

Still, tech valuations are stretched, and stocks investors ignored or sold off during the pandemic continue to provide excellent value.

This morning, after a struggle at the open, bears pushed the Index lower from an eight-month high. Bank shares retreated after gaining on Monday with the Index falling more than 3%, bringing its weekly rally to just shy of 20%. 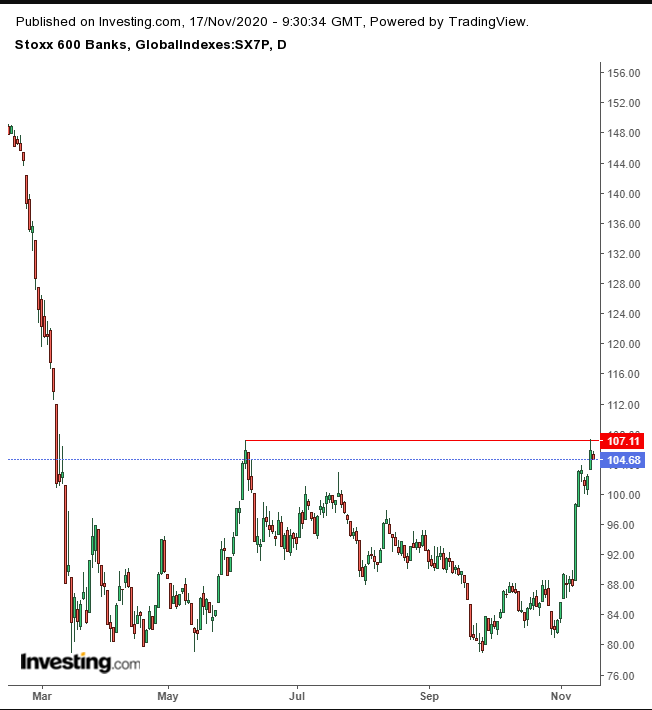 Technically, the selloff in banks also confirmed the June 5 peak. If bulls manage to break through, they will have completed a bottom.

The S&P 500 and the both closed at all-time highs. Lockdown darling Zoom Video Communications (NASDAQ:) , something we expect hasn’t finished yet. We anticipate other stocks that have done well during the stay-at-home period will also now be sold off.

However, now that lockdowns are, in fact, being mandated in states across the US, could these tech stocks receive another boost? On the other hand, companies poised to benefit from reopenings, such as cruise lines, hospitality companies and air carriers, which were all among yesterday’s best performers, could return to the bottom of the list.

Treasuries, including the benchmark note, declined for a third day. 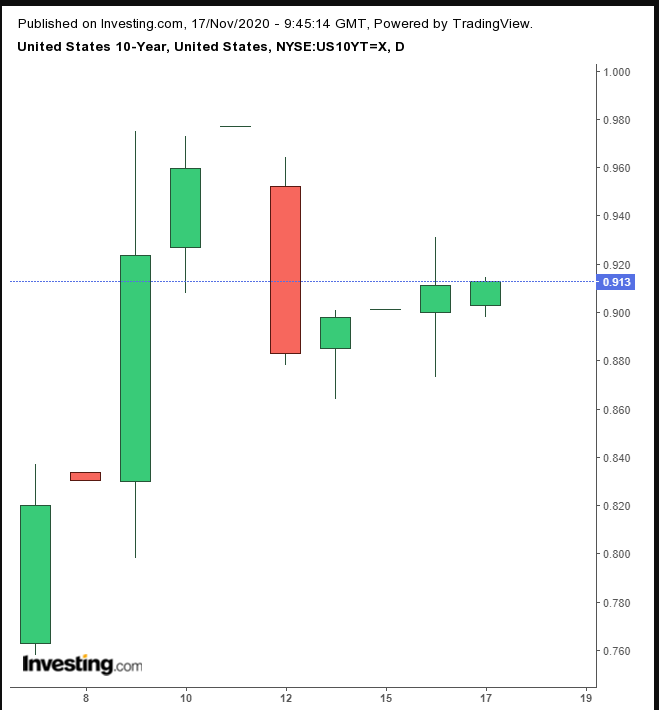 Today’s descent was so slight, however, if anything, it showed the slide is losing momentum, especially after yesterday’s high wave candle.

After a valiant bullish effort, the gave way, falling for a fourth straight day. 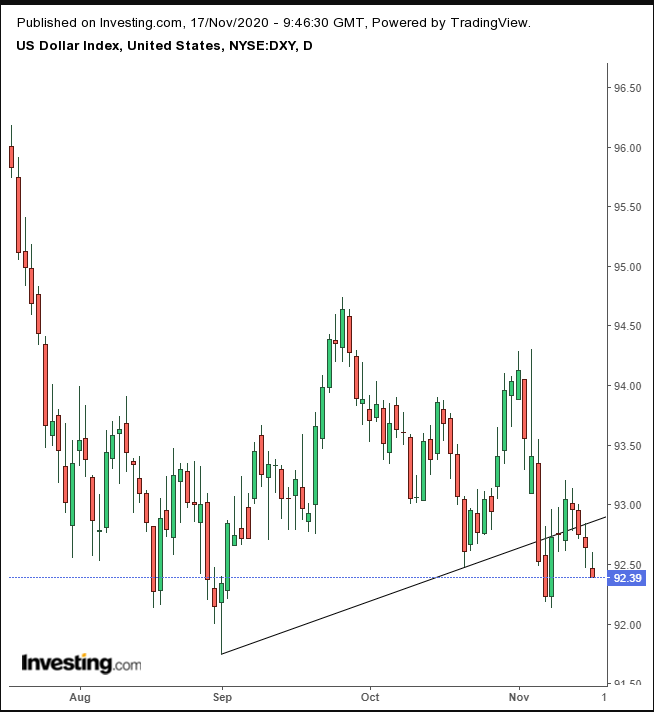 The USD has been trading at the bottom of the session, confirming the H&S continuation pattern.

In a mirror image, climbed for a fourth day. 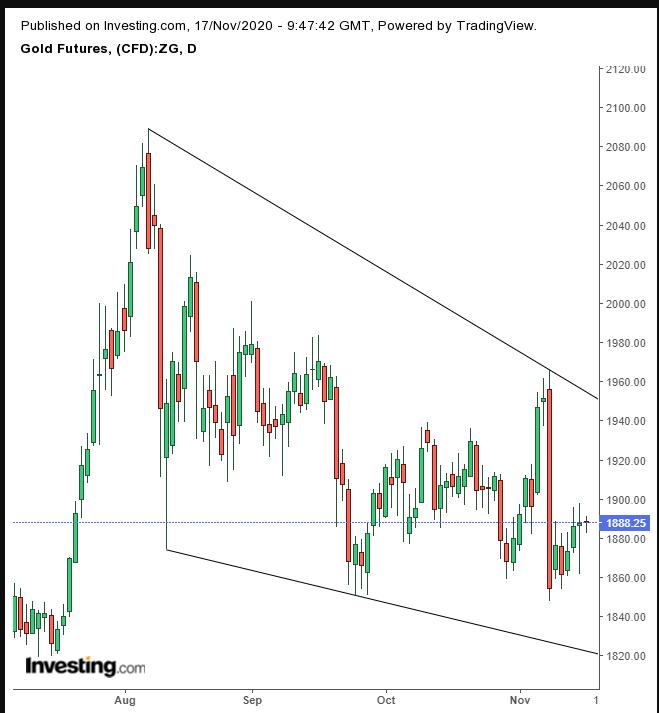 For the yellow metal to turn bullish, it would have to break the topside of the falling wedge.

fluctuated, but kept its higher opening price of around $41.40 on vaccine progress and the outlook of OPEC+ delaying a planned easing of output cuts. 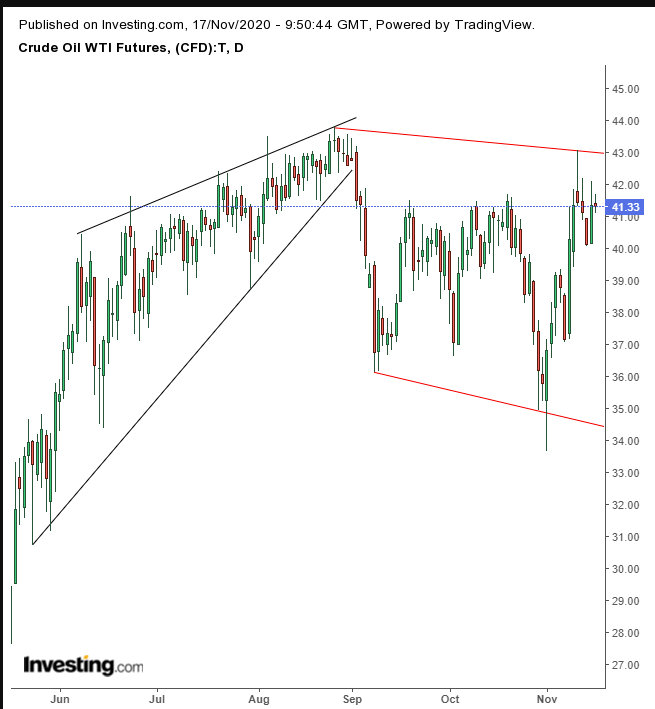 Technically, the onus is on oil bulls to overcome a three-day slide that confirmed Wednesday’s powerful shooting star. This established that bears dominate the market after a bearish wedge completion. We consider this rally a shorting opportunity.