European equities, including the , slumped to a five-month low on Wednesday morning on the that France and Germany will announce stricter lockdowns later today. Virus case numbers are across Europe and the US. Futures contracts for the , , and all slid ahead of the US open.

Safe haven investments, including the dollar and yen are all trading higher on increased demand, but gold is lower.

Futures on the S&P 500 Index suggest the underlying gauge will fall for the third straight day to a near-4 week low. NASDAQ futures outperformed overnight, buoyed by earnings from which benefited from increased demand for cloud and video gaming in the current stay-at-home environment.

In Europe, banks and travel firms led the Stoxx 600 index to a third consecutive decline, tumbling 2.5% on the news that leaders from the two of the largest European economies are considering closing restaurants and bars for an entire month in an effort to break down the spread of the infection.

Asian stocks were mixed. South Korea’s (+0.6%) outperformed after there surged to 91.6 from 79.4 in October, compounding the dramatic growth in reported yesterday. The positive economic news added to the weight of evidence of a strong economic recovery in the region which was driven by . Japan’s (-0.3%) underperformed, suffering from a strengthening , rising to the Mar. 6 peak. 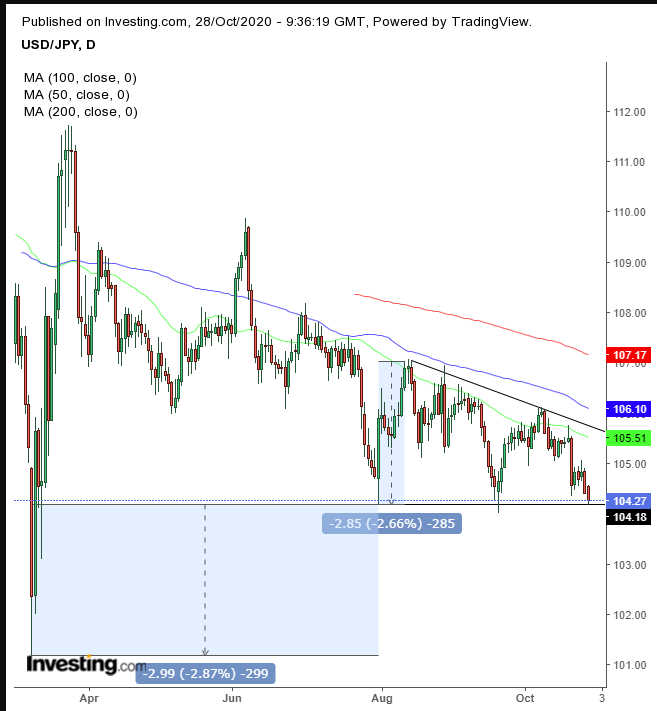 The USD/JPY is on the brink of completing a descending triangle, whose downside breakout will contain an implied target that aims at the March lows.

On Tuesday, all the major indices fell, except for the , boosted by a tech rally ignited by Advanced Micro Devices’ (NASDAQ:) announcement of a $35 billion takeover of another chipmaker, Xilinx (NASDAQ:). The tech sector also benefited from demand for stocks that have proven profitable amid the coronavirus pandemic.

However, almost 75% of stocks closed down, with banks bearing the brunt of the slump.

Like the yen’s rise on its haven status, Treasuries, including the , were in demand, pushing yields down for the fourth straight day. 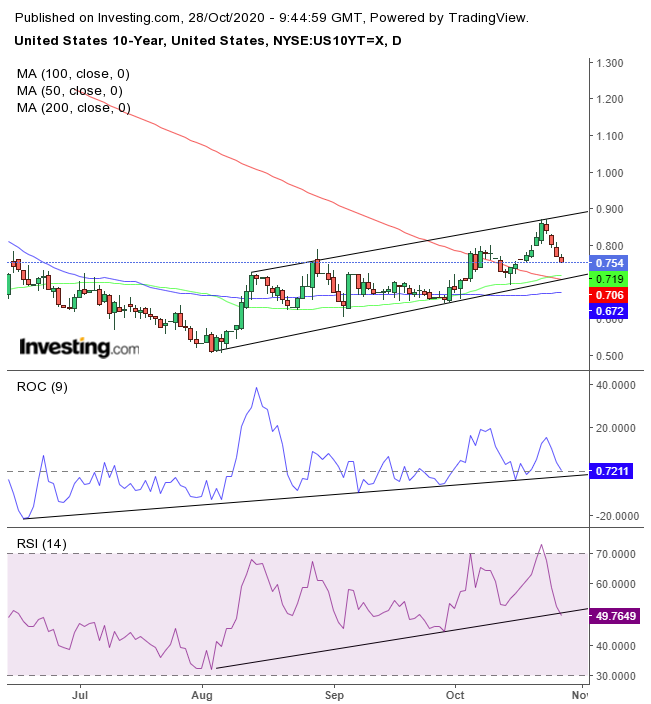 Nevertheless, we still consider this drop a correction within a rising trend for yields, as long as it remains within the rising channel, confirmed by a golden cross supporting the channel, and both ROC and RSI momentum based indicators finding support, for now.

The rose for the fourth day out of five, boosted by rising Treasuries. 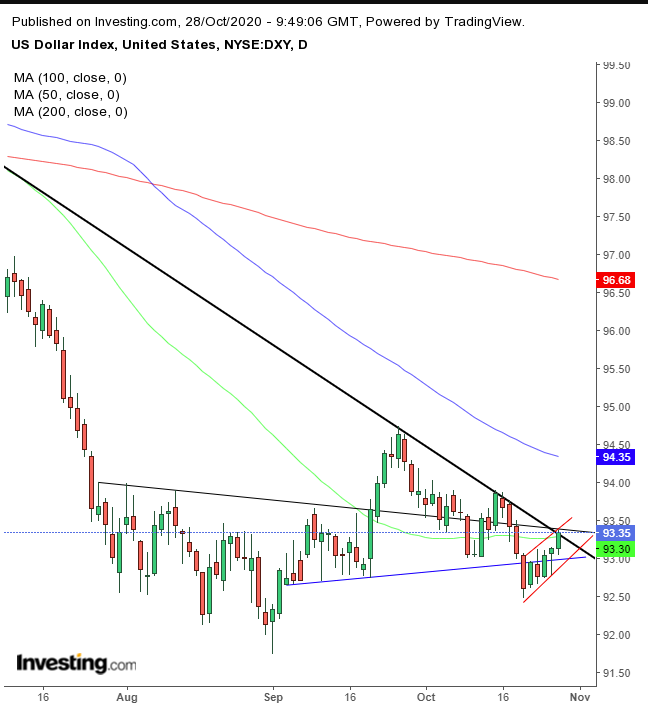 Technically, the dollar is testing the top of its bearish flag (red) and the downtrend line since the March high (thick black trend line), while climbing back above the neckline (blue) of a H&S continuation pattern. Notice, the price is at the old neckline of the failed H&S bottom (black).

ahead of next Tuesday’s explosive elections. 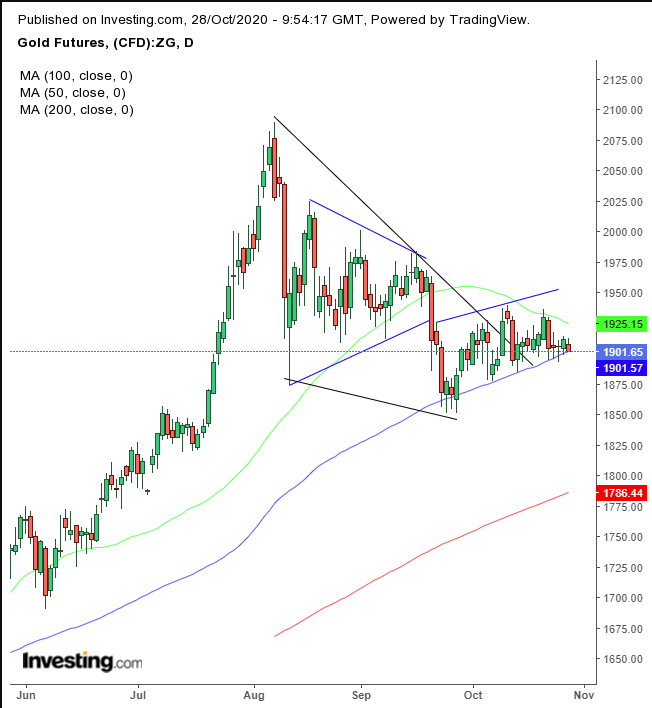 We can see the complex nature of the overall range since the Aug. 7 all-time high, starting with a bearish symmetrical triangle, followed by a bearish rising flag—whose bottom is naturally made up of the 100 DMA and whose top is resisted by the 50 DMA—while all this bearish posture is sandwiched within a wedge, bullish with a topside, decisive breakout, not the drift we’ve been witnessing since the September low. The next meaningful move may set off an explosive chain reaction in its direction.

was little changed, erasing an advance, having reached the highest intraday price since the $13,764 June 26 peak, following Tuesday’s highest close since that of Jan. 13, when Bitcoin registered a $13,794 close. 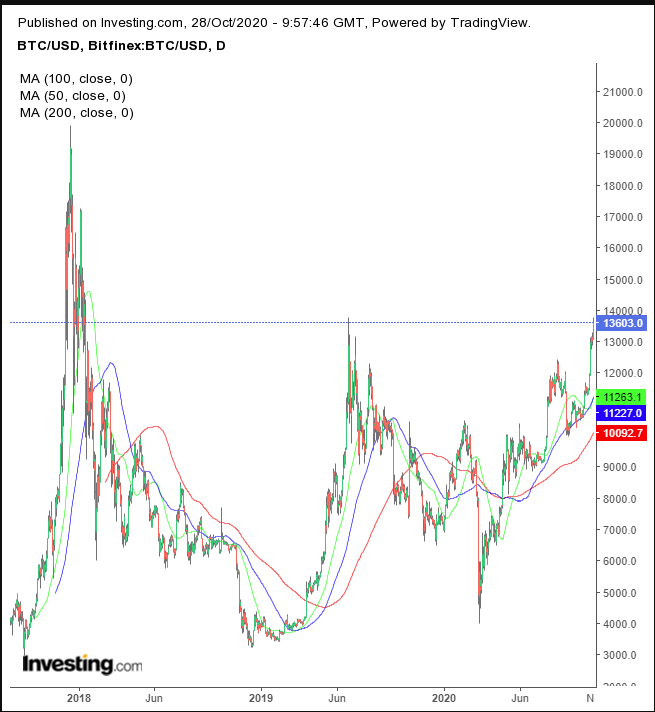 fell again below $39 after a report showing a surprise rise in US . 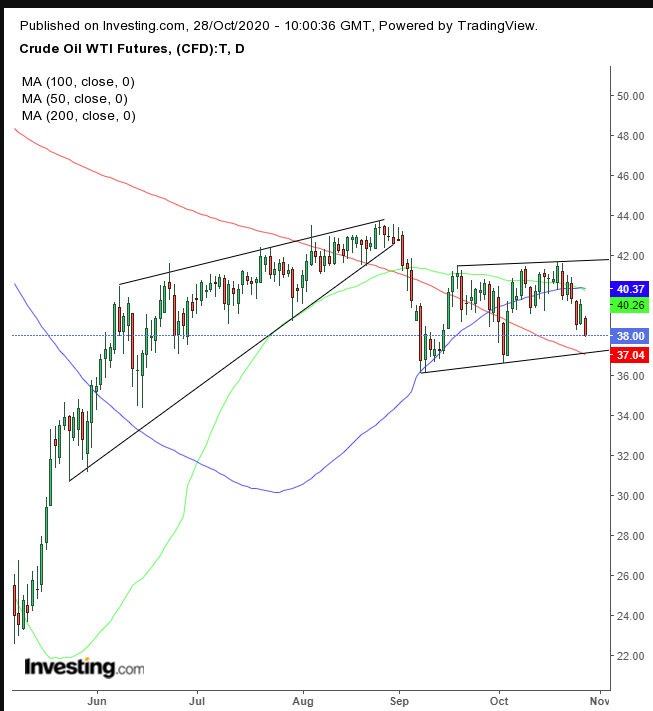 The price is headed toward the bottom of a range, protected by the 200 DMA. While that range bottom could serve as another bounce toward the $42 level, we think a downside breakout is more likely, having followed the bearish wedge.

Additional social restrictions would be the impetus for another decline, while a stimulus bill might very well send it flying again. The price is likely to remain trapped in the range till the elections.