US futures, including for the , , and and European shares were all marginally higher on Wednesday as investors attempt to balance positive news on a potential vaccine against increasing COVID-19 cases worldwide.

The dollar and gold continue to fall, while oil has been trading higher.

Ahead of the trading week, we that the market would be driven by two conflicting forces around the same theme: the vaccine and the virus

And for the second day the exodus out of sectors that thrive in the stay-at-home environment to stocks that perform well in an economic recovery reversed. As coronavirus cases continue to escalate across the US, traders have been concerned that until any potential vaccine is approved and widely distributed, the economy cannot restart in a meaningful way. So they quickly jumped back into in technology stocks.

The recent rally that propelled global stocks to records—with US indices including the and leading—was ignited by vaccine progress, as investors began to imagine the return to a normal world without social restrictions. As a result, industries that benefited from the virus, such as technology companies that enabled people to stay connected for employment, shopping and entertainment, were suddenly viewed as too pricey. Investors cashed out and invested those profits into the new bargains—traditional value stocks.

In Europe, the index fell at the open this morning, but managed to rebound and is little changed as of the time of writing, as became the first European country to exceed 2 million COVID cases. The technology sector rally offset losses in energy and real estate shares.

Asian benchmarks were less one-sided. Australia’s and South Korea’s both advanced 0.5%. Japan’s , was, the outlier. It fell 1.1%, pressured by automobile stocks, one of the country’s major exports, overshadowing better-than-expected total . The market there was also dented by the news that coronavirus cases in Tokyo had started to increase again.

American stocks retreated from records on Tuesday, as investors sold off sectors sensitive to the economy after the release of weak US .

Pharmacy chains underperformed on the S&P 500 after Amazon (NASDAQ:) announced the company’s . Tesla (NASDAQ:) has added over 9% after of its inclusion on the S&P 500 Index beginning Dec. 21 was announced on Monday, helping the maverick company, considered by some critics to be unstable, is set to gain blue chip status.

The pushed against Monday’s lows. 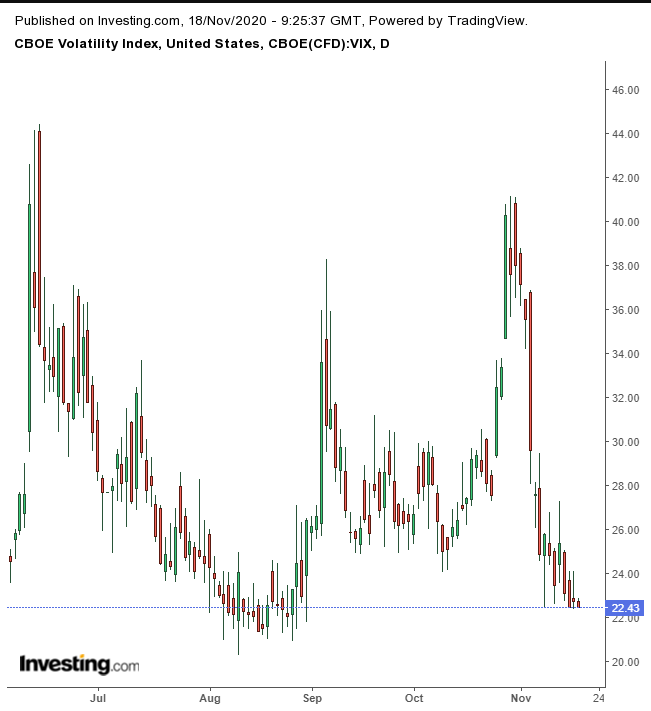 If the “fear gauge” declines by another 0.2% it will hit the lowest level since Aug. 25—quantifying the jitters the virus will have on market volatility.

Like the volatility index, yields also seemed to find support, for now. While yields are down for the second day—after Chairman of the Federal Reserve, Jerome warned the country’s economy has a “” before returning to pre-pandemic levels. Yields, including for the Treasury note, did rebound off their lows, demonstrating hoarding of Treasuries. The overall trend is clearly rising, framed within the clearly defined rising channel.

The was dragged lower, extending the decline to its fifth straight day—its longest losing streak since Aug. 18, three months to the day. 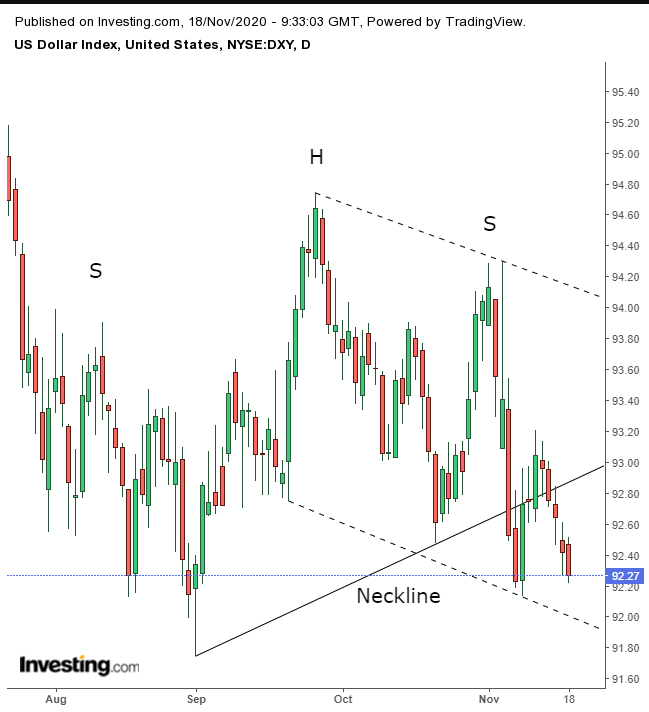 The USD’s test will be the Nov. 9 low and the bottom of the falling channel.

fell for the second day, which is noteworthy considering that both the dollar and stocks are also in decline. 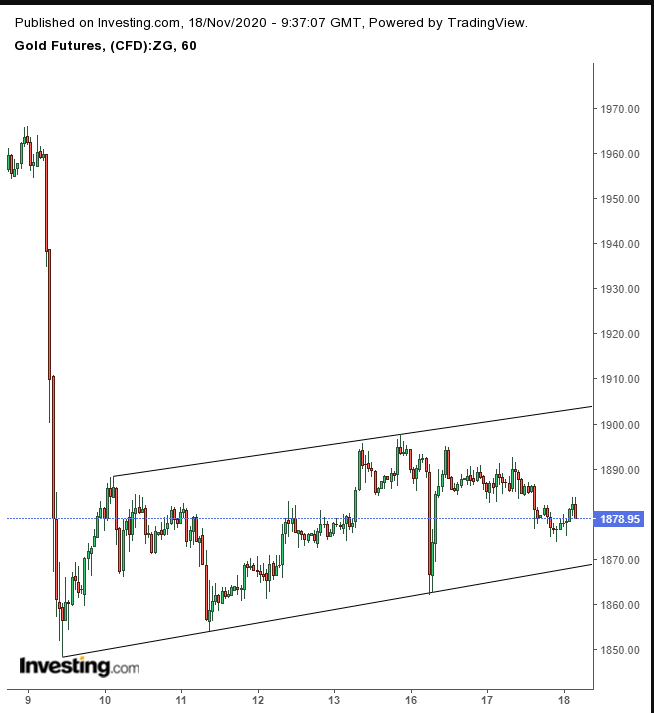 Gold has been rising in the short-term within a shallow rising channel, slowly picking up the pieces since the preceding 5.5% crash.

gained for the third day in a row, for the first time in almost two weeks. The popular cryptocurrency hit its highest level in three years on Tuesday after crossing the $17,000 mark, as Ray Dalio, co-founder of Bridgewater Associates, the world’s largest investment fund, tweeted: “I might be missing something about Bitcoin.” 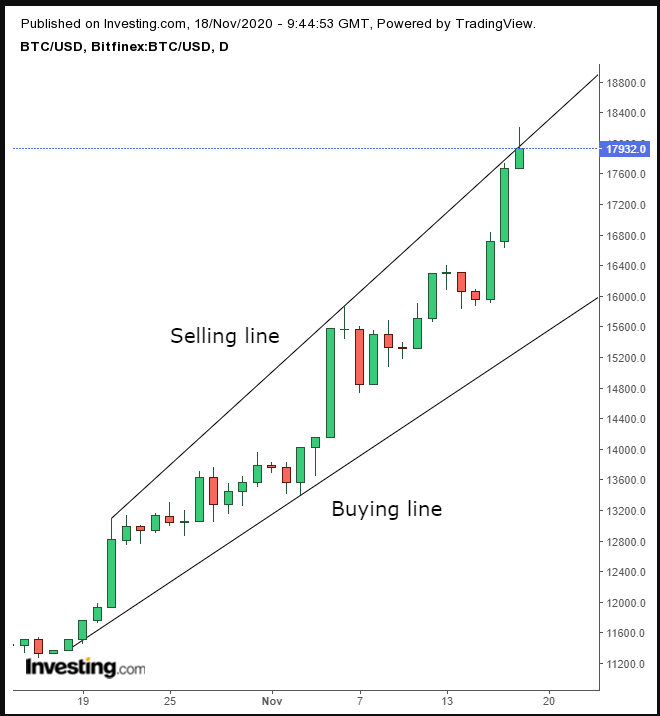 However, the price found resistance at the $18,000 level, pushing the digital asset off its highs, potentially forming a shooting star. Bitcoin was pushed down below its rising channel, which is continuously being stretched. We’d feel more comfortable buying it at the $16,000 level, upon a return to the channel’s buying line as noted on the chart.

struggled to cross over the $42 threshold as investors weigh a of over 4 million barrels versus Asia demand. 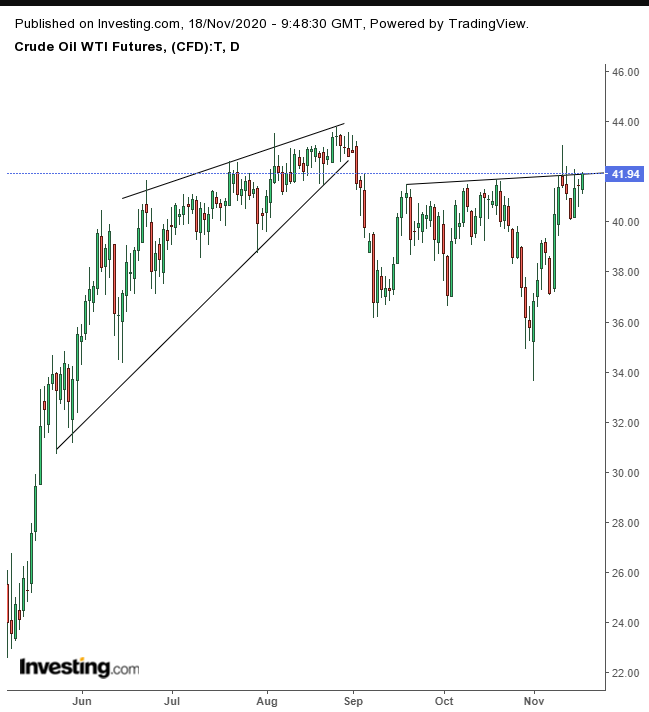 If the oil price climbs over $42 It may complete a bottom, but money is on retesting the $36 range low after the bearish wedge.