Heading into U.S. elections on Tuesday, three of the four futures contracts on major Wall Street indices—for the , and —are all up more than 1%, while futures for the are +0.8%, potentially signaling that the underlying benchmark may underperform for a second day. A second day rebound for the indices, despite mounting virus cases, could be flagging a possible win for President Donald Trump’s reelection bid.

On the other hand, the USD slipped lower this morning, which as “net-short positioning ahead of the U.S. vote” suggesting “the dollar is somewhat less protected on the downside in the event of a Blue wave” in anticipation of a Biden victory.

U.S. stocks have been a statistical indicator for presidential outcomes since 1928, based on whether they are up or down within the three months prior to an election and have provided since 1984 on an incumbent’s chances. On Monday, stocks closed back in positive territory, which might signal a Trump victory, just as in 2016 they declined prior to the elections, foreshadowing the loss of Democratic candidate Hilary Clinton (then the incumbent party).

Of course, anything can actually happen.

This morning, the Index opened higher and extended a recovery rally from a five-month low to its third day. Growth-sensitive cyclical stocks like oil and gas providers along with miners and bank shares led the gains. French international banking group BNP Paribas SA (PA:) surged 4.6% after posting a profit beat thanks to accelerated trading revenue.

Earlier, during the Asian session, regional indices finished firmly in green territory, with most major benchmarks closer to a 2% gain. Australia’s , Hong Kong’s and South Korea’s led the gainers.

For Australian markets, it was the best session in almost a month after the country’s central bank and launched QE. South Korean shares gained the most in almost five months as the local mood was positively influenced by strong factory output data from major economies, including the , and the , easing concerns about another recession amid the continuing global pandemic resurgence.

Ironically, despite’s China data “soothing some nerves” ahead of the uncertain U.S. election, the lagged, (+1.4%), while Japan was closed for a holiday.

Yesterday, American equities rebounded from their worst slump since before the March lows, as dip buyers sought bargains in energy, materials and industrials shares, hoping Tuesday’s election would finally remove the current primary risk to markets—the ongoing anxiety regarding what the next government might look like.

The outperformed, (+1.6%), while the drooped (+0.4%), as shares of (NASDAQ:) and (NASDAQ:) were sold off as investors stepped back into beaten down stocks that provide better value.

The return of risk-on appetites also prompted investors to sell off Treasuries. 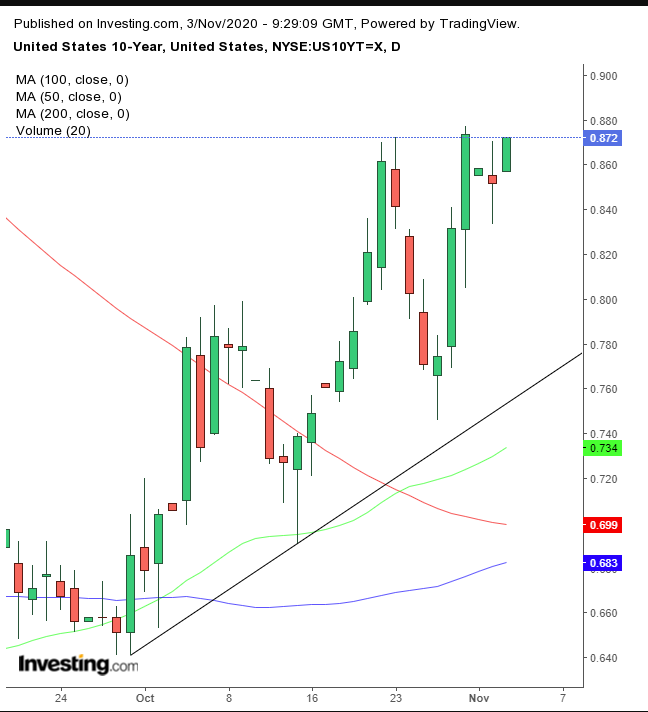 Yields, including for the benchmark, rose. After Thursday’s new high confirmed the uptrend, rates are likely to keep rising.

The fell for the first time after a four-day-straight rally. 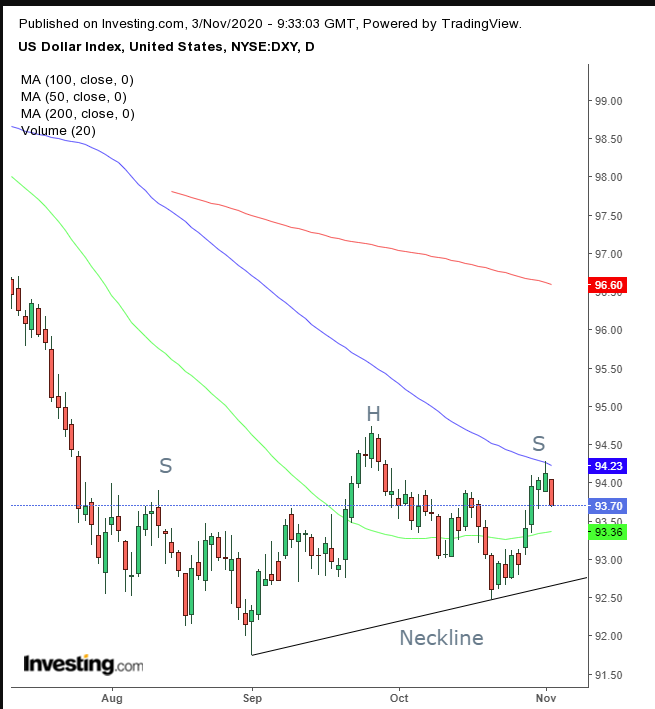 The greenback found resistance at the 100 DMA as , trading within a long a H&S continuation pattern that would extend the downtrend.

rose for the third day, on dollar weakness. 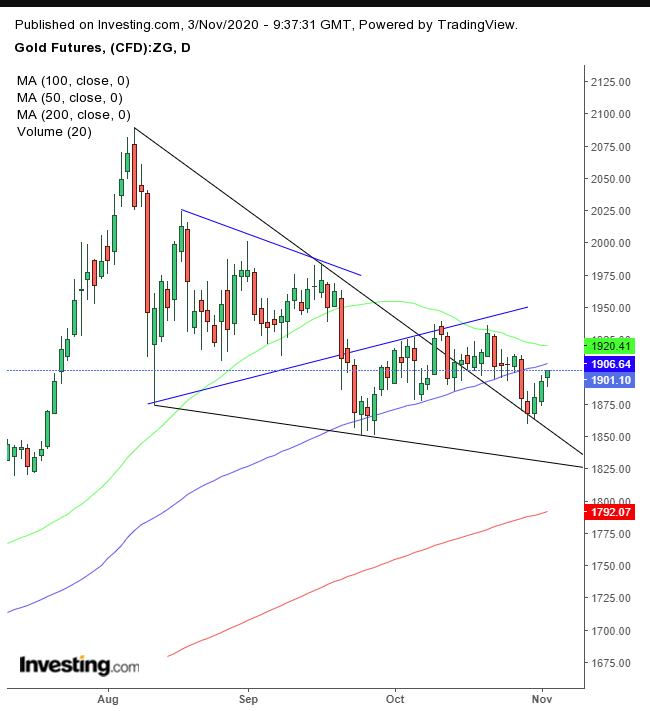 While the precious metal bounced off the bullish wedge, it has to invalidate the rising, bearish flag—whose bottom is naturally drawn by the 100 DMA, which is itself a downside breakout of a bearish triangle. Its trajectory going forward will also likely be driven by ; it’s viewed as a safe haven hedge against rising uncertainty, something in greater abundance right now.

, on the other hand, fell for the third straight day. Though the cryptocurrency was off its lows, just like it was yesterday, there remains lingering demand.

climbed for a second day, extending Monday’s biggest gain in three weeks, on rising expectations OPEC+ will postpone rolling back output cuts. In addition, the weakening dollar boosts the price of the commodity. 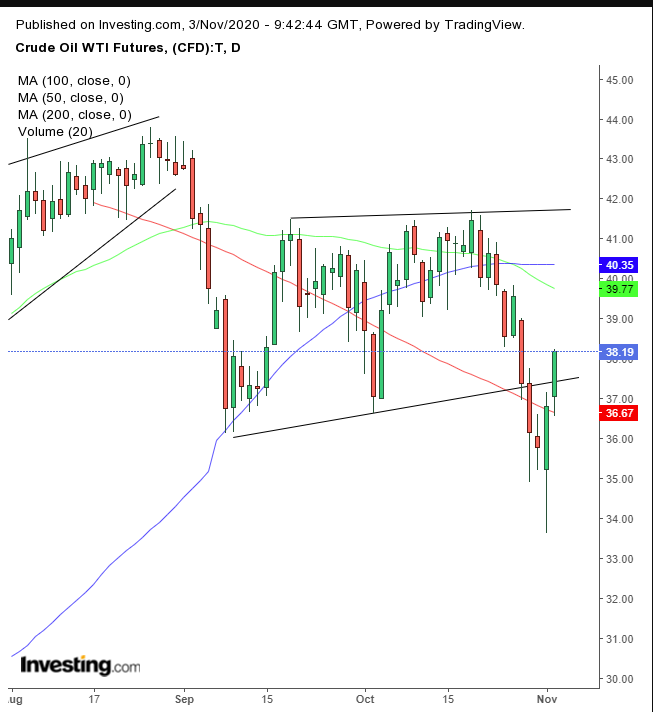 The two-day jump, with prices closing strong at the top of the session, creates a quandary for traders: as WTI reentered a range after crossing back above the 200 DMA, they increase the chances of a return to $42, if prices don’t fall back below $37. The next major move could be contingent on which direction oil moves today.