The most powerful global, monthly rally in three decades, which on Tuesday propelled the to a historic high, took a breather on Wednesday as futures on the , and traded lower ahead of the release of a string of US economic data. futures bucked the trend as the cyclical rotation out of tech shares reversed.

Markets are hoping today’s releases—which include and —will confirm signs of an economic recovery, to support the recent rally in risk assets.

In Europe this morning, the Index was lower despite the European Union it has secured a deal with Moderna (NASDAQ:) to purchase 160 million doses of its potential COVID-19 vaccine. The deal is the sixth of its kind for the EU—it has already inked deals with BioNTech (NASDAQ:), Johnson & Johnson (NYSE:), CureVac (F:), AstraZeneca (LON:) and Sanofi (PA:)

Gains in defensive utility stocks and bank shares failed to do enough to lift the pan-European index. Bank shares advanced despite belonging to the category of stocks that have lagged due to a flattening yield curve, leaving them small profit margins during the coronavirus pandemic. Financial equities were in demand after a report was released noting that the ECB may lift its ban on bank dividends in 2021, provided their balance sheets were robust.

Earlier in Asian trade, indices were mixed. Australia’s gained 0.6%, hitting a nine-month high as US political uncertainty abates. The retreated after touching its highest level since December 2018. 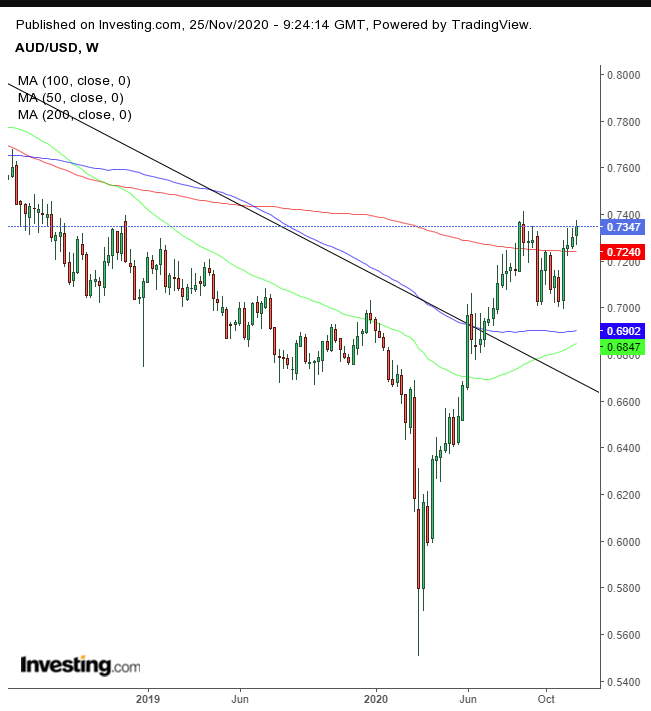 The Aussie is still up for the fourth consecutive week, after overcoming the 200-week MA.

China’s underperformed the region. The index fell 1.2% and suffered its steepest intraday selloff in almost a month, as electric vehicle stocks fell on news of a government investigation into the sector.

Hong Kong’s increased 0.3% on the news it is linking funds with China, bridging between investors from one of the best performing markets in the world and the rest of the world.

On Tuesday, during the New York session, US stocks jumped following news that the transition to the Biden administration would finally be allowed to begin, removing some political uncertainty. The announcement that President-elect Joseph Biden would be nominating former Federal Reserve Chair, Janet Yellen as his Treasury Secretary increased confidence yet further. 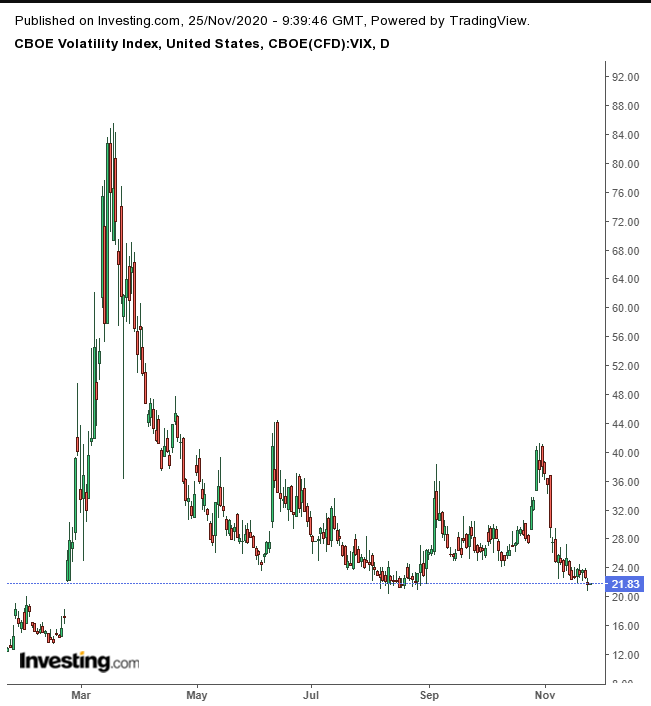 On Tuesday, the volatility index came the closest since August to entering the rising gap caused by the pandemic’s initial selloff. 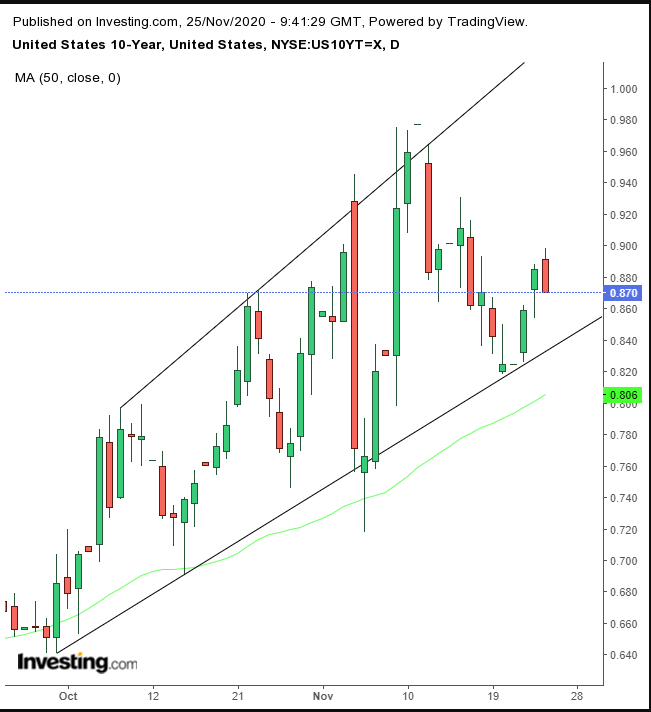 Rates are trading near the bottom of a rising channel.

The fell for a second day, to the lowest since April 2018, but bounced back, finding support by the Aug. 1 hammer. 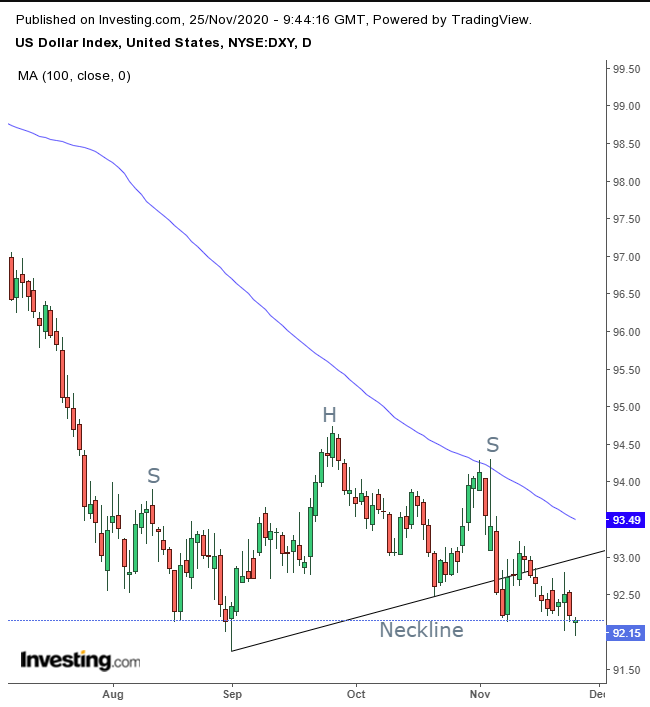 After the greenback completed a H&S continuation pattern, we expect it to resume its underlying downtrend.

The cautionary tone ahead of Wednesday’s US economic releases, has spurred investors to add to their portfolios. 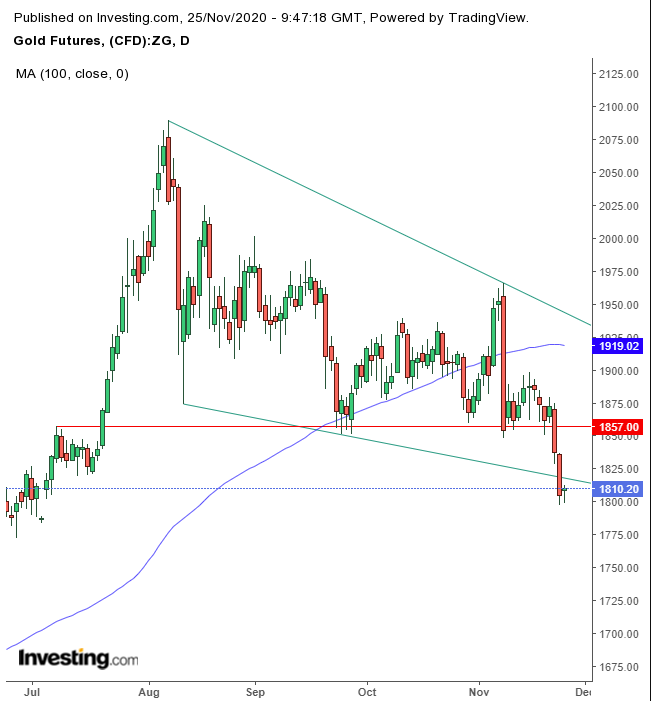 The precious metal’s technical support may be the start of a return toward the top of what we initially thought was a bullish, falling wedge. However, as time goes on, it looks more like a bearish, falling channel. The $1,860 area (red line) seems now like an important support that may have been broken.

kept most of Tuesday’s gains, as the cryptocurrency remained above the $19,000 level, for the first time since December 2017. 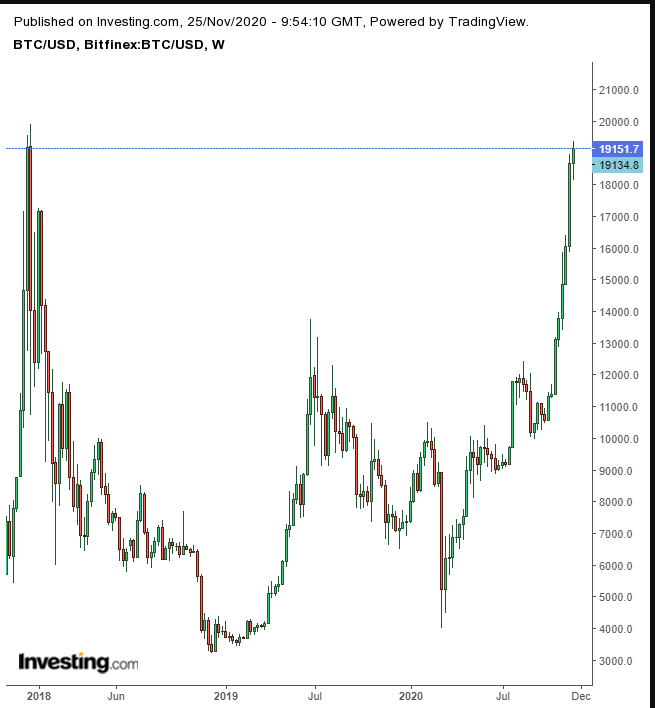 Tuesday’s close of $19,134.80 came within a hair of the Dec. 16, 2017 record close of $19,187. While enthusiasts cheer the possibility of a new record, we urge caution as chasing the price is rarely a good idea. If this frenzy is driven by retail buyers, the moment their demand dries up, some violent whipsaws could occur. 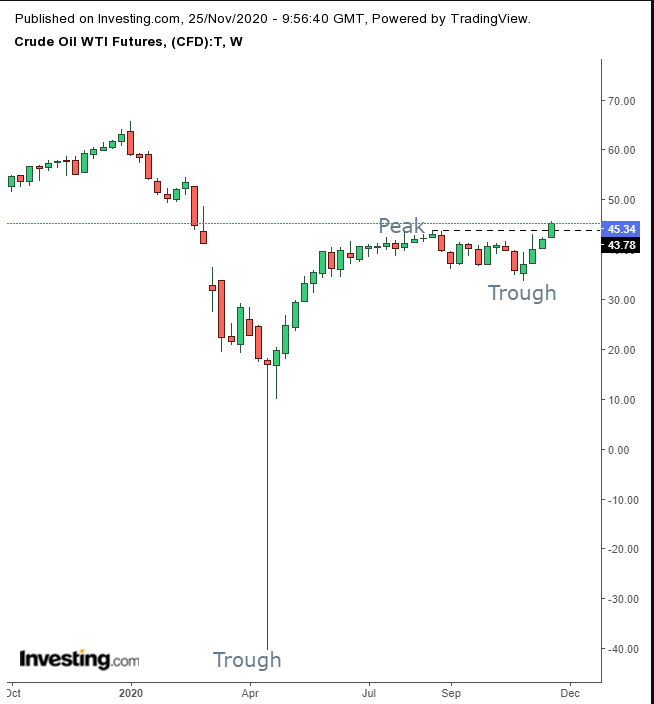 However, the price still managed to best the $45 level, posting the second, higher peak, required to establish an uptrend.

kept all its gains after jumping to the highest level since 2014. The red metal is expected to come into high demand during a reviving economy.