US contracts on the , , and as well as global stocks extended their rally on Tuesday following US President Donald Trump’s acceptance that the transition to a Joseph Biden administration must begin. On Monday, the US General Services Administration finally that would allow this to officially move forward.

The Dollar Index neared its lowest level since 2018 while oil moved off its highest levels since March. Bitcoin continues to push back toward its all-time high.

The relative performance of US futures confirmed the rotation out of tech and into cyclical sectors as well as away from large into small caps. Futures on the Russell 2000, (+1.3%), gained four times that of contracts on the NASDAQ, (+0.3%) as of the time of writing.

With the outlook for more than one effective vaccine now in focus, the view that social restrictions are likely to be eased also extended the rotation out of US and into international stocks. The worst global pandemic in one hundred years has also prompted international investors to repatriate capital out of the US stock market and into global shares as cases of COVID-19 across the US continue to increase. Investors poured $48 billion into 9 regional Asian markets since Oct.1, the most since 2013.

The , also sometimes called called the “fear gauge” fell to its lowest level since August. 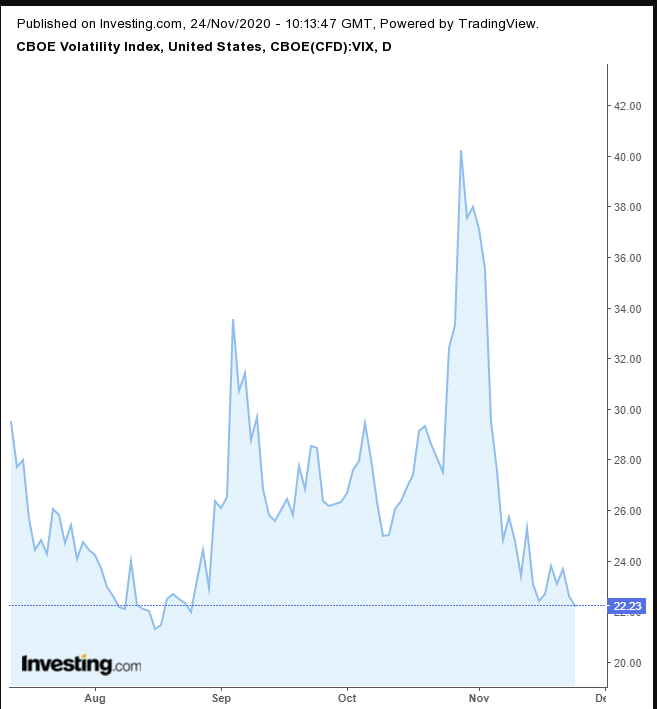 The drop also demonstrates that markets now believe there will be a smooth transition of power in the US, as well as additional positive news on three potential vaccines, increasing confidence in an economic recovery.

Helping bear that out, along with other nominees for position his cabinet, President-elect Biden has also former Federal Reserve Chair, Janet Yellen as Treasury Secretary. As a familiar face to stock markets with a proven track record, Yellen should make investors more comfortable about taking on additional risk. She’s also considered market friendly and will probably work well with current Fed Chair, Jerome Powell.

In Europe this morning, the Index rose by as much as 0.9%, supported by gains in the travel and oil and gas sectors, as these sectors have the most to gain from governments lifting lockdown restrictions along with economic recoveries. On Sunday, it will be easing social restrictions over the coming weeks. The pan-European benchmark reached its highest level since late-February but is still down 5.9% YTD.

Japan’s shot up 2.5%, as traders played catch up after Monday’s global rally which they missed because of a market holiday there.

China’s was the only major regional benchmark in the red, falling 0.3% from a 5-year high on apparent profit-taking, while showing no reaction to the start of the US presidential transition. Reuters claims that analysts don’t expect a US policy shift on China with a Biden administration, which we find surprising, after both Biden and the Democrats harshly criticized President Trump’s trade war with China.

NPR, Bloomberg, and Washington Post expect that Biden may change the tactics used to deal with China, but not the strategy.

Yesterday on Wall Street, US shares advanced as investors continued to cash out of the sectors that outperformed during the coronavirus, into stocks that are expected to perform better in a normal economy.

Yields, including on the Treasury note, also climbed for a second day. 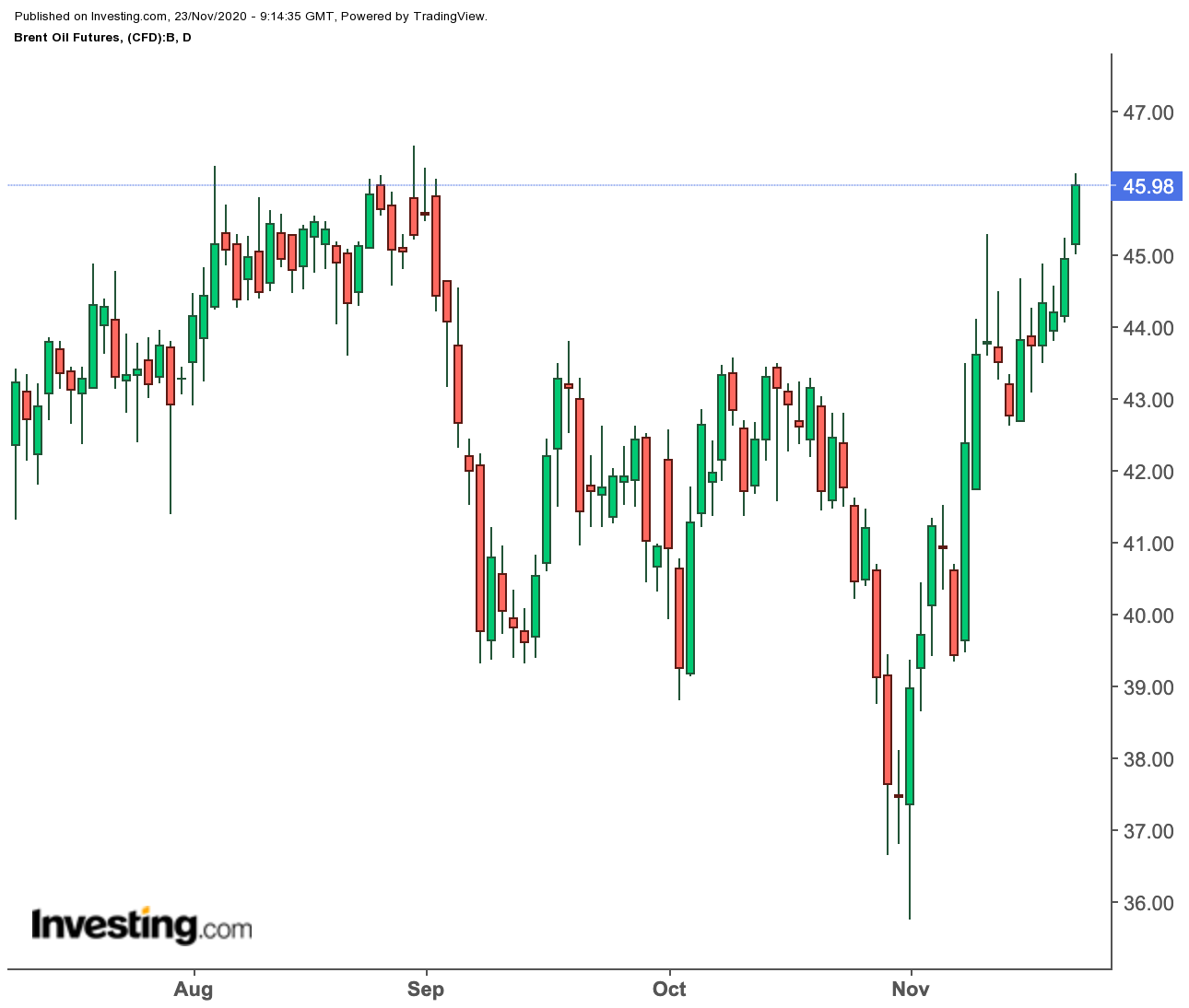 The extended the downside breakout of a H&S continuation pattern. 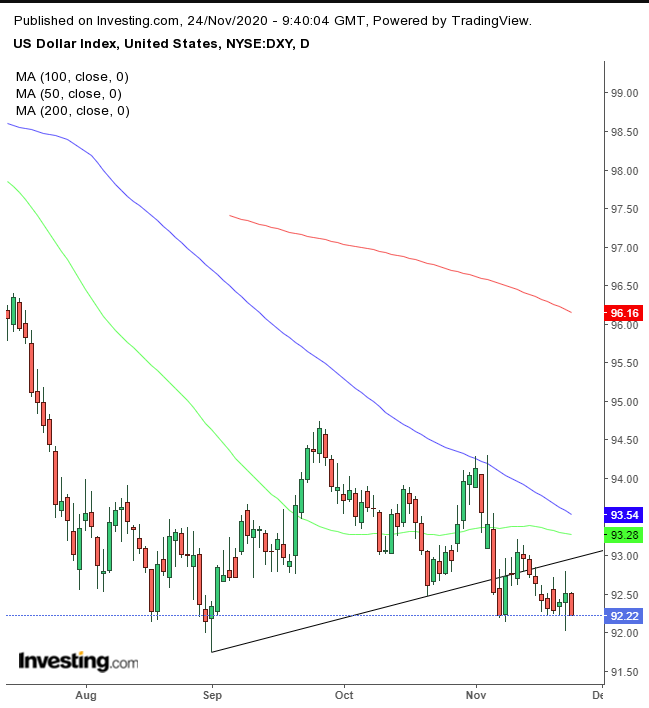 Despite the weakening dollar, fell because of its haven status as traders increased their exposure to risk. 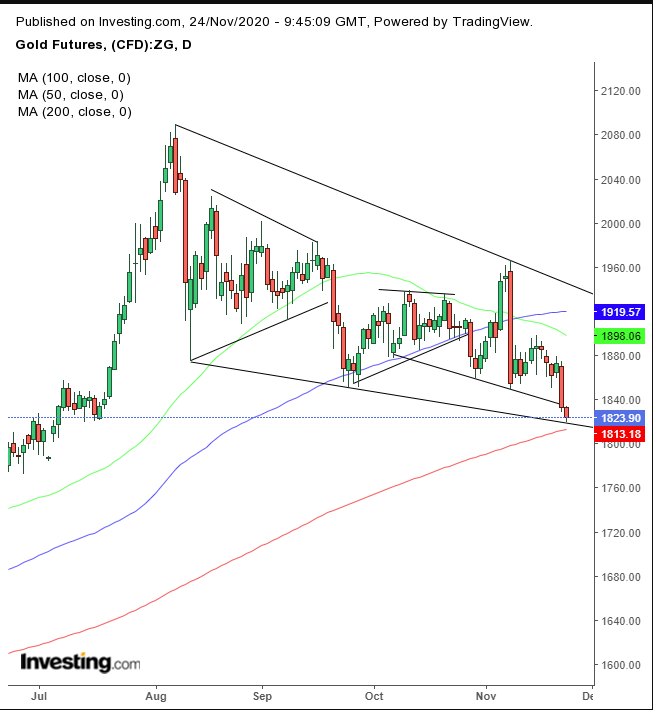 The yellow metal fell to its lowest levels since July 6, apparently finding support by the bottom of a range, which—after confusing us with different possible patterns since its early August all-time high—is unclear whether it’s a bullish wedge, as we have been thinking, or a bearish falling channel. if the price falls below $1,800, failing the pattern and the 200 DMA. 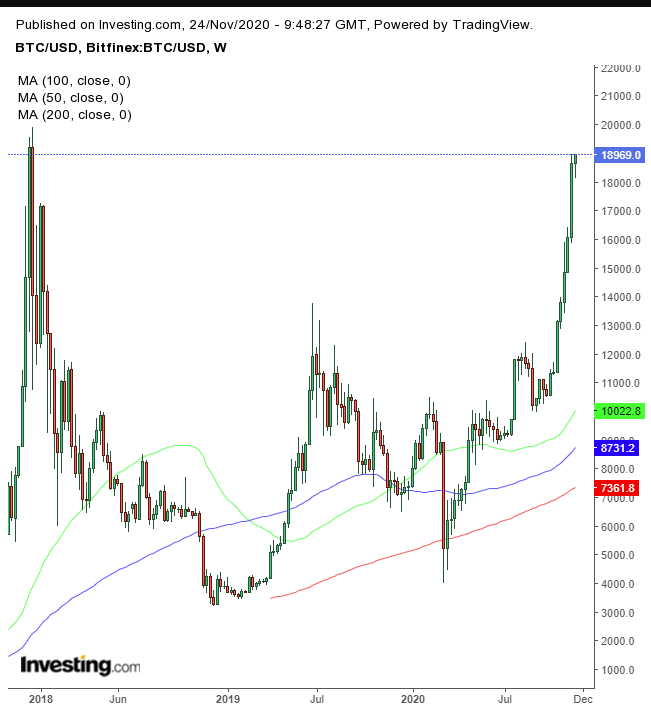 While the price is trading at the top of the session, showing strength, it stopped by Saturday’s shooting doji star, demonstrating the remaining supply bulls will have to cut through to take on the record.

climbed for the third day on hopes of a return to normal on vaccine news. 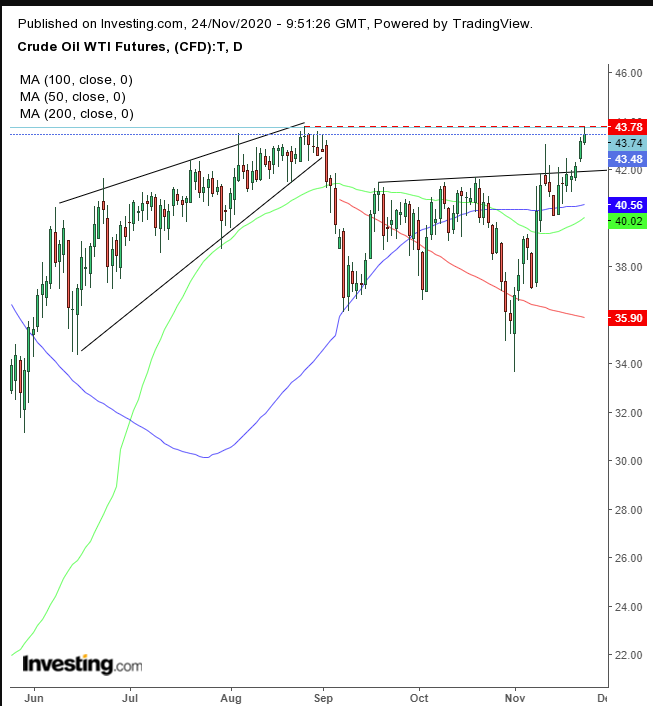 Technically, the price recently broke out of a bottom, but it found resistance by the bullish wedge’s high recorded on Aug. 26. If the price climb past $44, we’d turn bullish.