US futures, including the , , and , were in the green in pre-New York open trading on Tuesday while European markets wobbled as case numbers of COVID-19 hit new records across Europe and the US.

Treasury yields are under pressure as investors move into safe-haven bonds and the dollar is also lower.

Futures on the S&P 500 index pared an advance, but as of the time of writing the contract found support around its opening price, after its suffered the worst decline in a month on Monday. 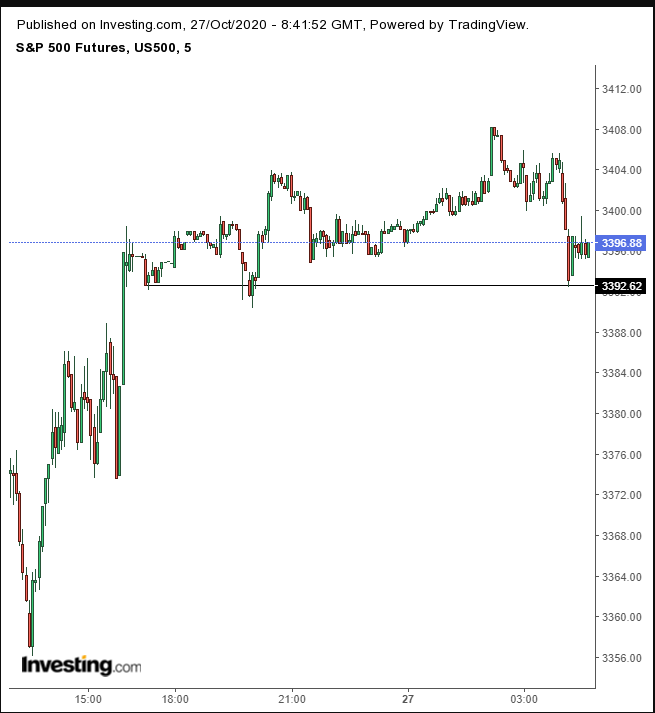 In Europe, the Index fell on the open, as a selloff in energy and automobile producers offset a rally in banks. HSBC (LON:) posted a better-than-expected credit-loss and Spanish bank Banco Santander (MC:) beat expectations which to continue paying dividends. The ECB had put a de facto ban on European banks paying dividends which had dented banks’ share prices.

Most Asian shares were down, following Wall street’s steep selloff on Monday, amid never-ending coronavirus cases and negotiations on a US economic relief package that just keep faltering

Australia’s was the clear underperformer, dropping 1.7%, with tech taking the brunt. Technology shares fell 2.8%, posting their worst drop in almost two months and a fifth straight day of declines, the sector’s worst run of losses since February.

China’s , aided by the materials and healthcare sectors, was the only major regional index to close in the green, up 0.1%, despite slow profit growth and industrial firms showing signs of lingering recovery challenges. Traders are also waiting for any news from a meeting of the country’s communist party leaders, which is holding its plenum where it will devise an economic plan for the next fifteen years.

The fall in the S&P was driven by worries that the surging coronavirus pandemic will interfere with the economic recovery, compounded by the failure of Republicans and Democrats to strike a fiscal aid deal. Recurring rhetoric caused stocks to pare losses at the end of trading on Monday, with House Speaker Nancy Pelosi expressing—again—optimism that lawmakers could reach an agreement.

The rebound may have saved the uptrend. 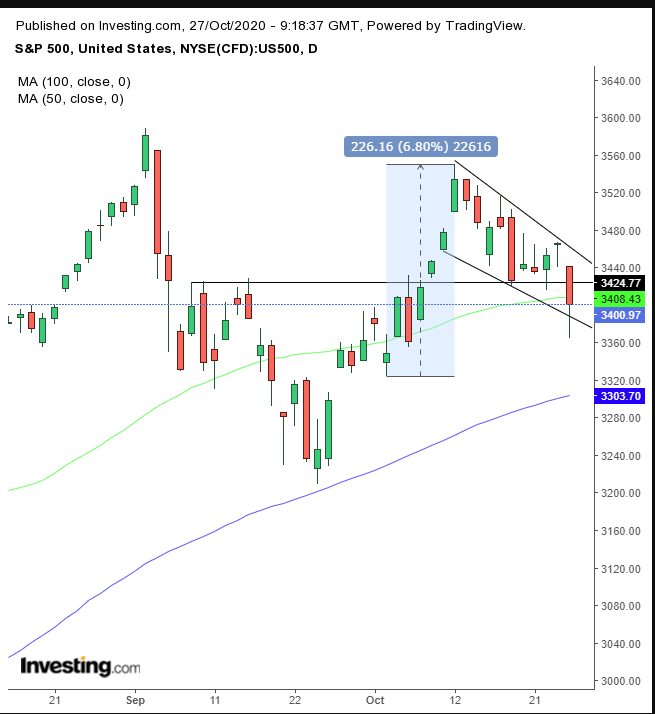 The benchmark bounced off the bottom of a falling flag—bearish after the near-7 percent rally in seven sessions—closing slightly below the 50 DMA and a little below the neckline of a H&S bottom.

Yields, including the , struggled to rise, and at the time of writing were down for the third day in a row, as investors cash out of equities and move their capital into the safety of Treasuries. 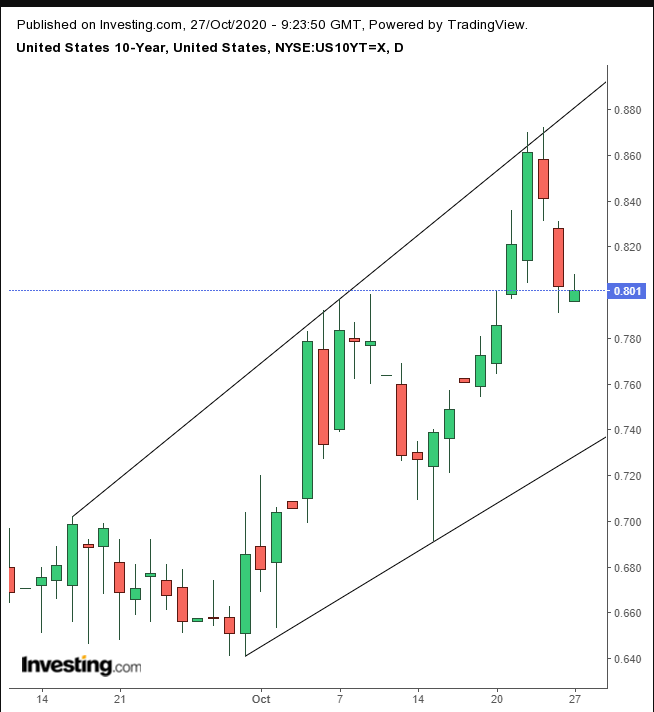 The move is considered a correction within an uptrend as clearly marked by the rising channel.

The fluctuation in Treasuries had an obvious impact on its denomination currency. The is behaving in the mirror image of yields—struggling to rise. 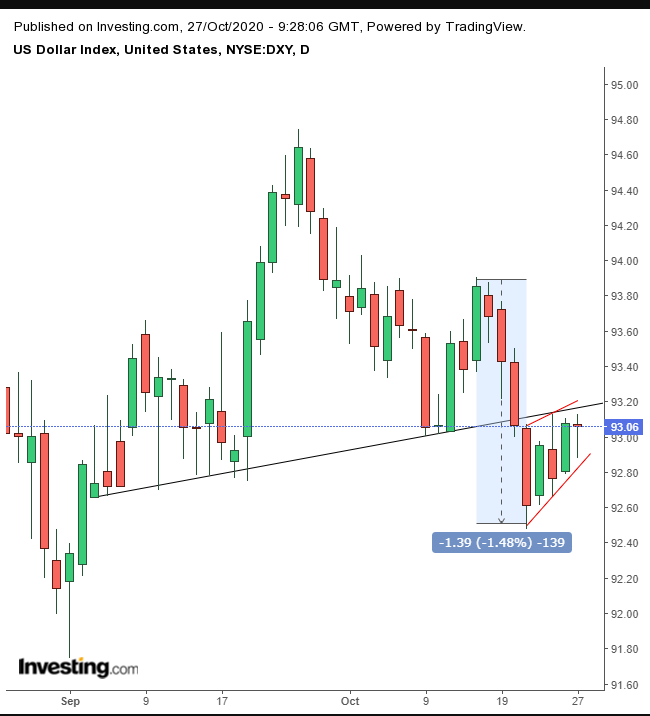 The dollar is trading according to a rising flag pattern, bearish following the 1.5% decline which completed a H&S top.

edged lower on its haven status on a risk-off day. 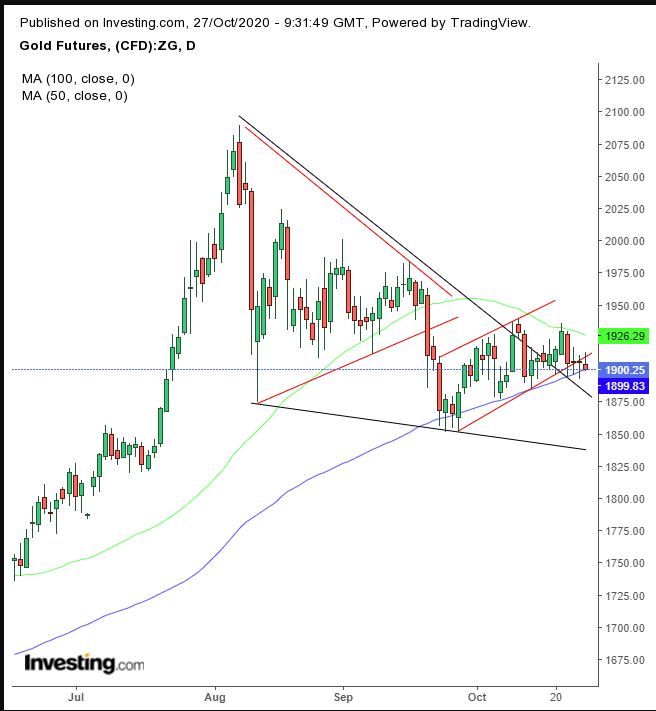 While it crawled below a bearish flag, it also peaked over a bullish wedge. The price is trapped between the 50 and 100 DMA, manifesting the hesitation of the trend.

climbed after yesterday’s wild fluctuation on a “Whale alert” in a $1.1B recorded bitcoin transaction, the largest on record. 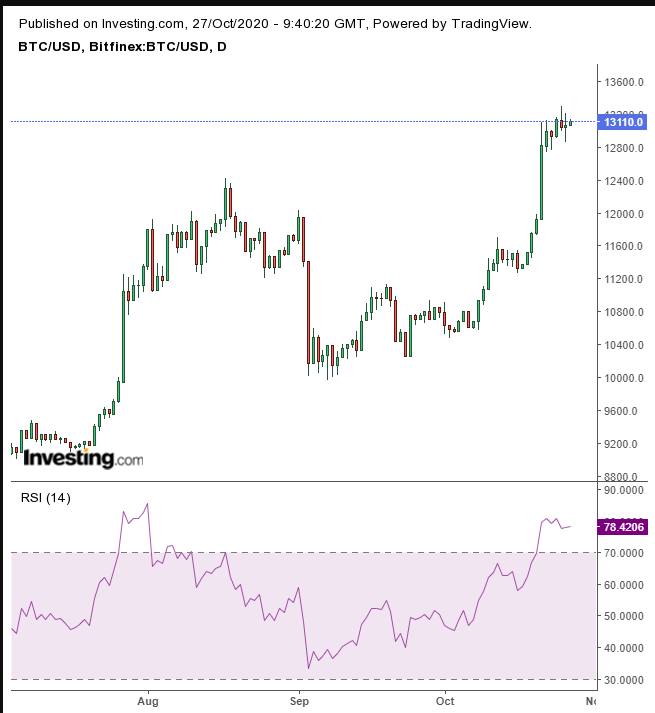 Bitcoin will have to surpass the $13,300 level to clear out the supply marked by Friday’s shooting star, as the cryptocurrency leader reaches the June 26, 2019 high of $13,764. The largest transaction in history may be indicative of the supply available at this resistance level. The RSI lowered from last Thursday’s 80.00 extreme overbought level, the highest since Aug 1.

seemed to have found its footing after Monday’s second consecutive daily decline but some traders think the price will as the pandemic dents global demand. 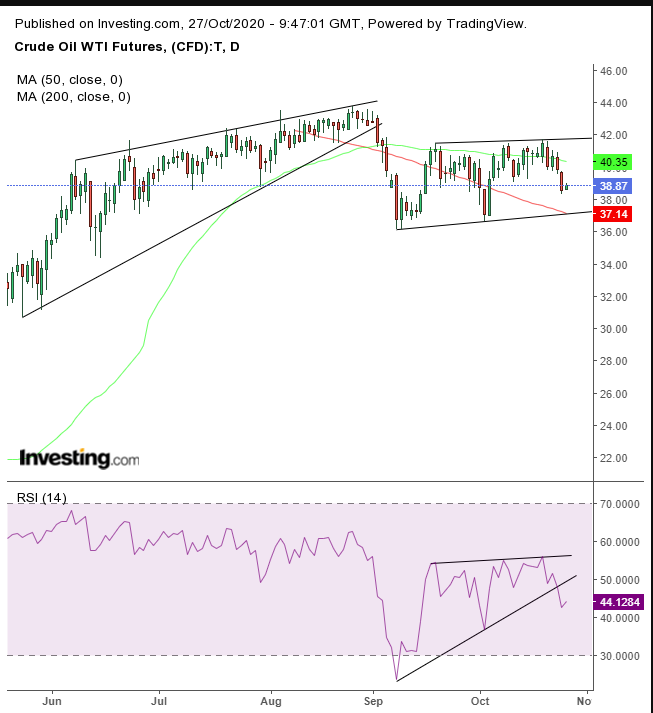 Technically, the price neared demand as it fell toward the bottom of its range since Sept. 8. The 200 DMA has become a resistance since the price crossed below it on Sept. 4. It remains to be seen whether the 200 DMA is a stronghold of bulls.

A downside breakout and a continued selloff is more likely after the bearish wedge. The RSI demonstrates that momentum has already done that.