Global equities dropped and bonds rebounded this morning as exuberance over a delay in new U.S. trade tariffs waned. However, elsewhere, an unrelated delay had a more positive effect: the leaped forward, hitting a 21-month high , after it was reported that British Prime Minister Theresa May was considering plans to rule out a no-deal Brexit—which in turn sparked speculation the March 29 deadline will be postponed. Meanwhile, an from Bank of England’s Governor Mark Carney also lent cable a helping hand.

Futures on the , and joined a global equity selloff and swung back to risk-off, while the slipped lower with most of its sectors.

The mood is likely to have turned sour after U.S. President Donald Trump said he might sign a deal with China, but, then again, it “might not happen at all”—thereby justifying our caution that markets probably priced in a resolution that may not happen as expected, especially with such a seemingly impulsive and outspoken U.S. president perpetuating uncertainty.

Earlier, in the Asian session, shares backtracked from yesterday’s rally, which had been prompted by Trump’s tweets announcing his intention to delay higher tariffs on Chinese exports to allow more time for a trade deal. China’s dropped 0.67%—though, after yesterday’s 5.6% surge, that should be considered as holding onto gains. Hong Kong’s slipped 0.65%, erasing yesterday’s gains. Japan’s dropped 0.37%, after brushing off a two-and-half month high. A weakening in the early global session probably offset deeper losses.

In yesterday’s U.S. session, stocks opened higher thanks to Trump’s upbeat signals, shaking off the previous European decline and resuming an Asian rally. However, the main indices closed well off their highs, and small caps’ gains turned into losses before the day was out. 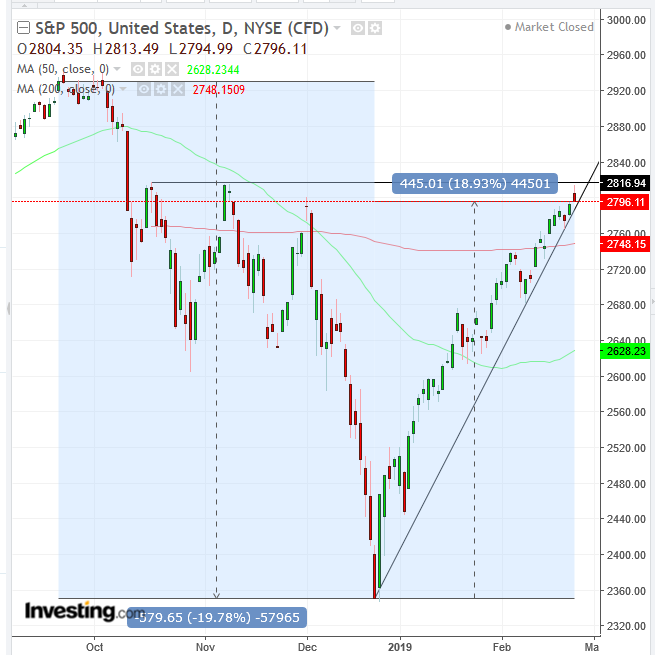 The eked out a 0.12% gain, led by a climb in (+0.65%). (-0.83%) prevented a more meaningful advance. Technically, the index needs to prove there is sufficient demand to overcome the 2,800 levels, where supply pushed prices back down in October, November and December. Interestingly, that would also mark the 20-percent level from the pre-Christmas bottom. As of yesterday’s close, prices have gained 18.93% since the Christmas-Eve trough.

Despite the fact that, strictly speaking, the market has always remained in bull market territory, the 19.78% fall from Sept. 21 2,929.67 peak till the 2,351.10 bottom posted on Dec. 24—and therefore the minimal distance from an official bear market—has had an impact on sentiment. Therefore, a 20% climb from the pre-Christmas bottom—the accepted gauge for a bull market—may yield a positive psychological effect on investors.

If in fact prices close above the October highs, we would reconsider our bearish position, while a fresh peak would force us to recalibrate with the market’s changing sentiment, despite our views on headwinds such as the Fed’s , the lingering U.S.-China trade war, Brexit and U.S. politics.

The closed 0.23% higher, after going through the same pattern as the S&P 500 of closing well above highs.

The sealed a 0.36% advance, outperforming its peers. It too went through the motions of an opening rising gap, extending the rally, to finally close well above its highs, just one day after closing above the 200 DMA. The tech-heavy gauge is 22.04 percent from its pre-Christmas bottom.

The slipped into the red, closing 0.08% lower. Technically, it formed a shooting star, but since it closed the gap, there is no potential for an Evening Star/Island Reversal. The price closed right on the 200 DMA, demonstrating how the index is on the edge of a knife. Also, the RSI, at 75, is the most overbought since August, which preceded the drop since its record peak.

Meanwhile, traders are focused on the semiannual testimony delivered by Federal Chair on the state of the U.S. economy. This event, taking place today and tomorrow, could potentially be a market-mover, as Powell will have the chance to clarify whether markets have been interpreting his January address correctly. 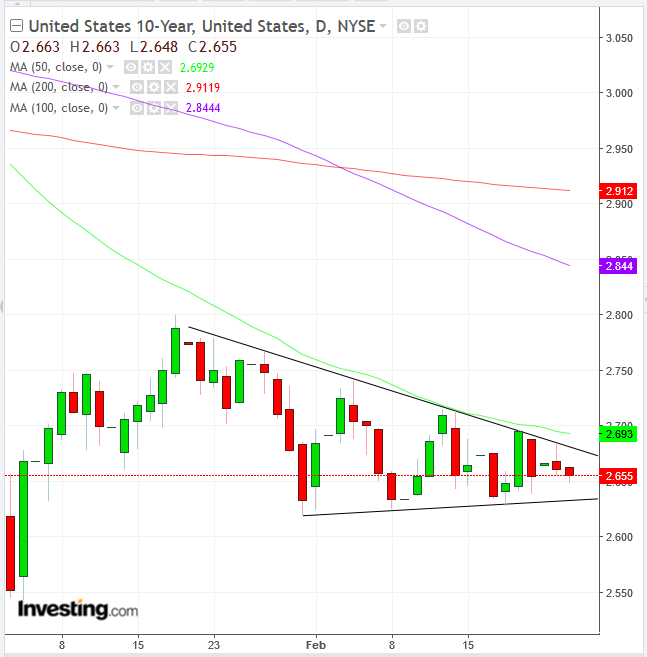 The yield on Treasurys was seen losing ground for a second day, after touching the top of a bearish pattern, as . 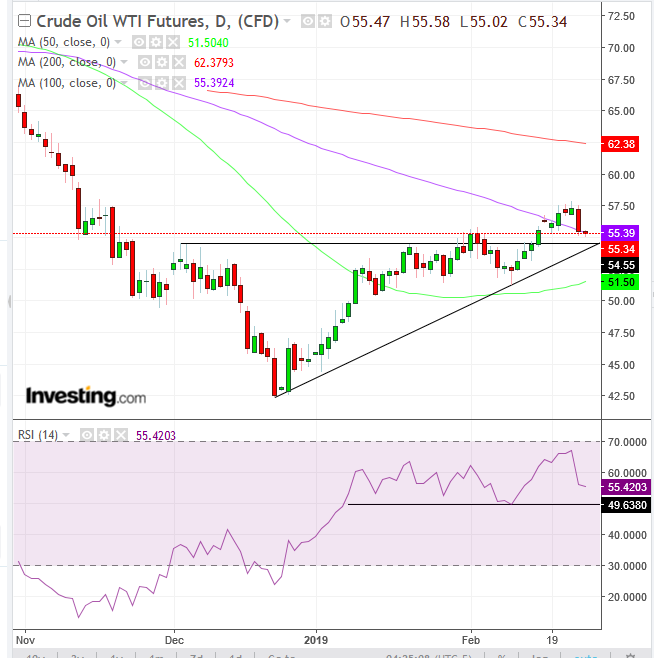 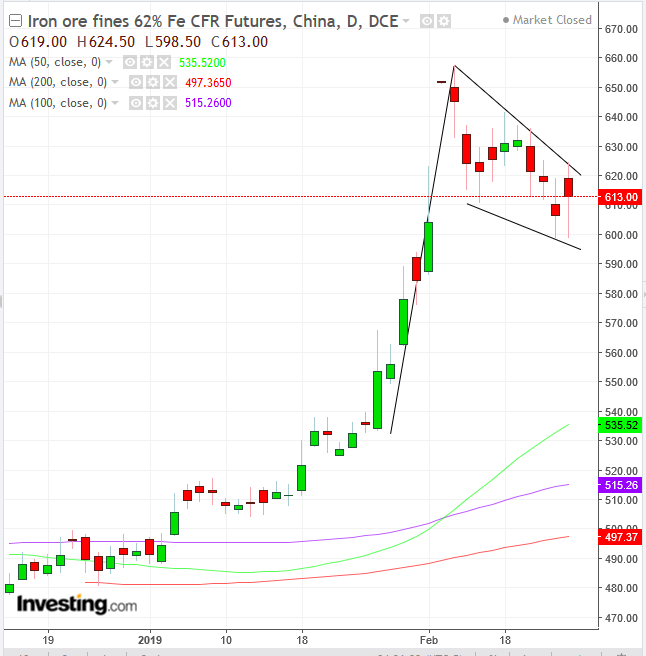 retreated after Barclays warned the metal may erase all its dam-disaster-led gains this year. Technically, however, the commodity is forming a falling flag, bullish in an uptrend and predictable after the 22% jump in the six sessions Jan. 28-Feb. 11. The metal was climbing into positive territory by late European morning.