US futures on the , and were trading lower on Wednesday ahead of the US open, after the posted a fresh record yesterday on positive earnings and the u-turn by the government-backed Chinese media on tech regulation, which offset worries that the spread of the Delta variant of COVID-19 will upend the economic recovery. futures were marginally higher as tech sector earnings continue to beat expectations.

Although the S&P 500 closed at nearly the top of its game yesterday, it fell short of notching a new all-time high, a prize still held by Thursday’s trading session. With futures wavering today, it appears that they are bucking the global trend higher as investors might be taking some profit after yesterday’s rally.

In Europe, the Index opened higher, then extended its advance. 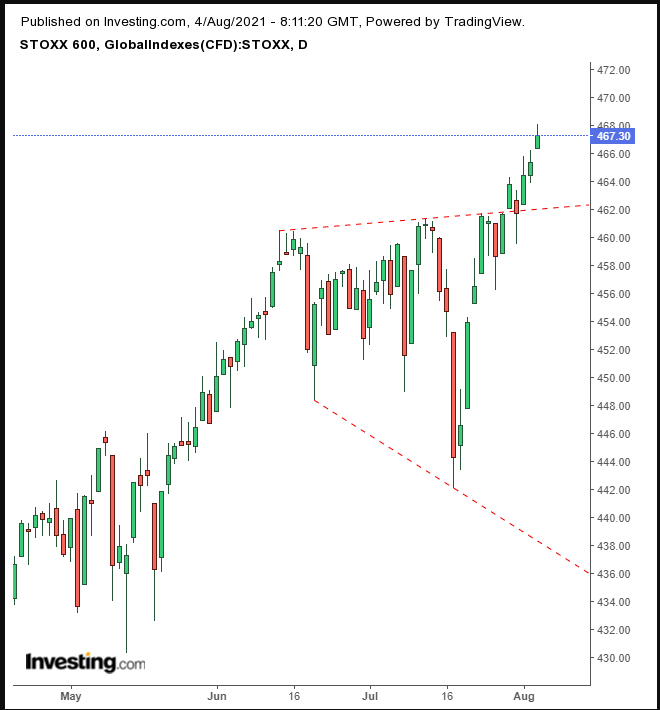 Still, bulls met with some resistance, as they gave up some of the gains, trading below the highs of the session, forming a potential Shooting Star, bearish upon a close. The preceding gap, followed by the potential doji, if the pan-European index pares some more of its gains, shrinking the candle’s real body and lengthening its upper shadow, marking how far bears were able to drive bulls back.

Having said all that, European stocks have a technical advantage over US equities, which may be contributing to today’s strong advance, even after yesterday’s record, on both an intraday and closing basis.

The European gauge blew out a broadening formation—a period in which stocks were leaderless, and now appear to have found new leadership.

The fundamental European driver was the Chinese state media backtracking on some of its earlier harsh criticism of video games—including removing an article characterizing it as “spiritual opium”—which caused Tencent Holdings (HK:) to plunge.

In earnings news, Commerzbank (DE:) took a hit after an miss. 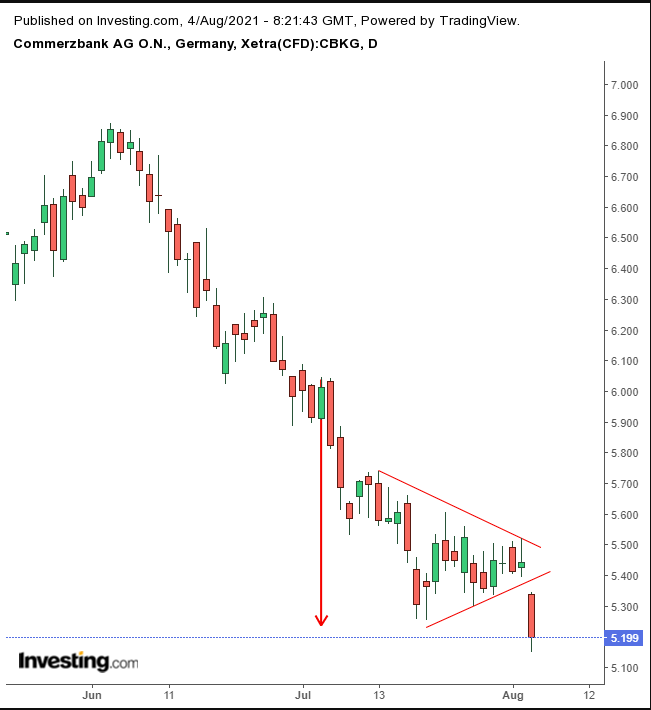 Shares in Germany’s second-largest bank may have completed a bearish pennant, a range in which the price reached equilibrium, presumably where even demand is created by short-sellers. The downside breakout is seen to take place after all the short coverings are done, and the market is ready to proceed lower.

Most of Asia was in the green, with South Korea’s leading the charge with a 1.3% advance, with tech stocks spiking more than 1%, as China muted its tech regulatory rhetoric. The next best performers were Chinese stocks on both the and Hong Kong’s , both rising 0.85%.

Japan’s was the only regional gauge in negative territory, 0.2% in the red as Softbank Group (T:) dipped on the threat of its $40 billion sale of Arm to chip company NVIDIA (NASDAQ:) being blocked by the UK government. Alibaba (NYSE:) revenue expectations for the first time in more than two years, as a result of the lockdown.

Positive corporate results led stocks in the US and Europe to record highs, despite the continued spread of the Delta strain of COVID-19, coupled with the highest since the 2008 financial crisis, which has been attributed to bottlenecks in the distribution of goods due to pandemic lockdowns. Asian investors, on the other hand, have proven more cautious as their economy reopens due to stricter rules and slower vaccinations there.

Key US this Friday could prove a catalyst for the next market move if the data allows investors to continue to buy-in to the Fed’s promise of unprecedented monetary accommodation, or alternatively, if traders adjust their outlook and think the Fed’s hand will be forced to change course due to a strengthening jobs market and high inflation. Meanwhile, Fed Vice Chair Richard Clarida is slated to speak today at 10am ET.

The yield on the Treasury note seemed to find its footing after Tuesday’s lowest close since Feb. 11 and by the “real yield”—which cancels out inflation as it reduces the payout—reached a record low. 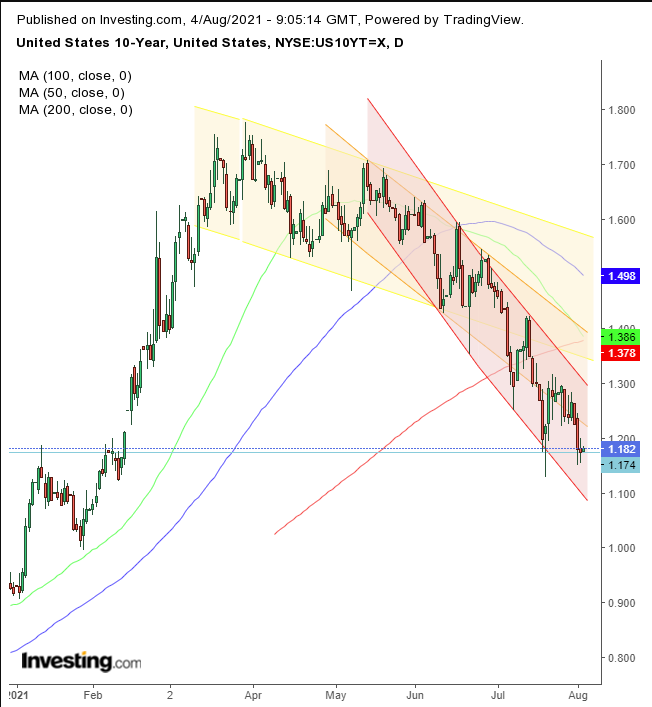 Yields have been steepening their descent, as investors increase the weight of Treasuries in their portfolios. We can see how the rate of descent has been increasing with ever-sharper falling channels.

The rose, but it may be short lived. 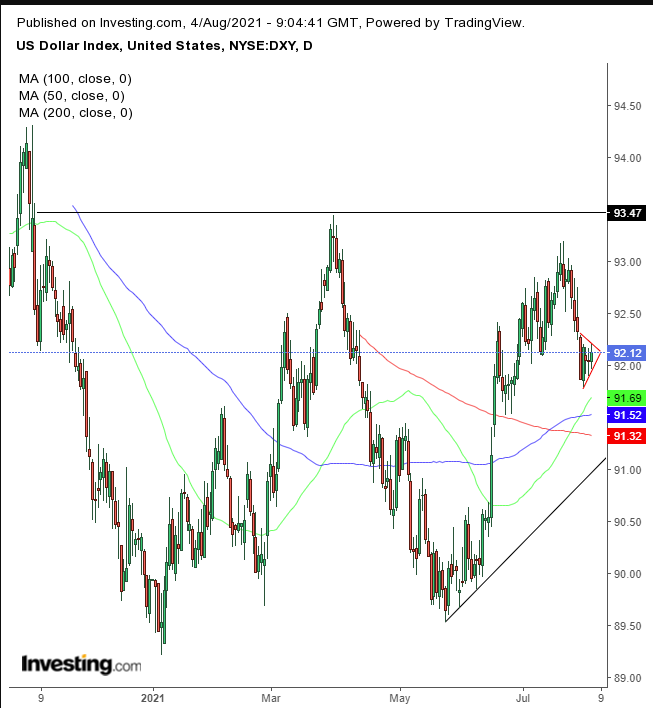 The dollar rose toward the top of a potentially bearish pennant, after a four-day straight selloff, toward its short-term uptrend line. The greenback started its decline after nearing the neckline of a massive double bottom.

edged higher, despite a stronger dollar. 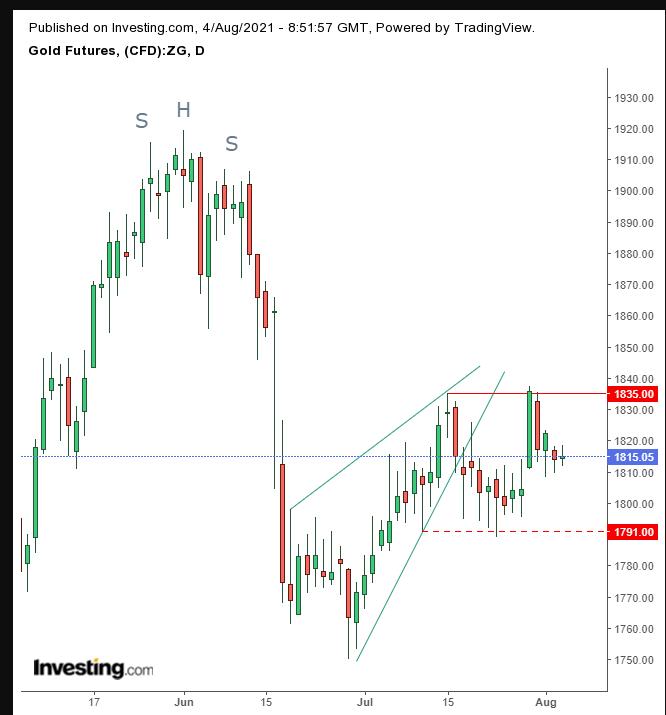 The yellow metal is ranging after completing a bearish wedge. 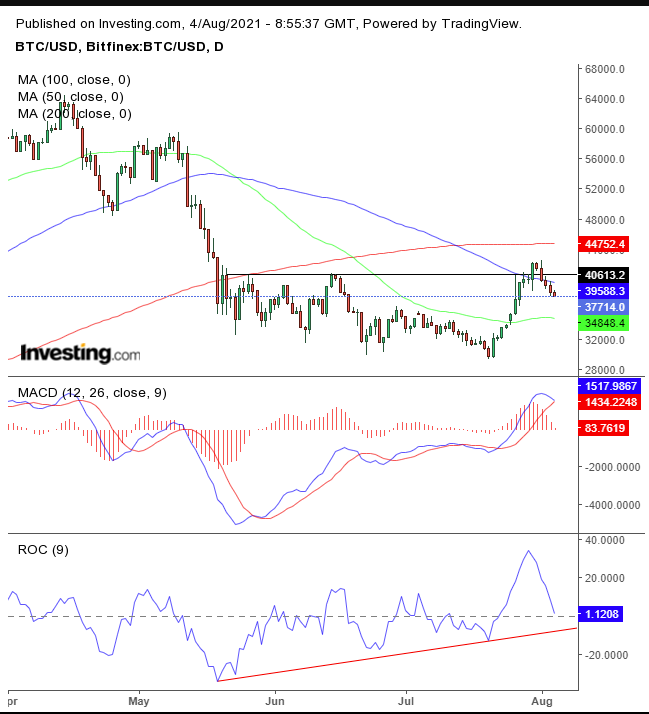 The price may be blowing out a would-be double bottom, after nearing the 200 DMA, then falling through the 100 DMA on the way to the 50 DMA. Meanwhile, both the MACD—a price-based indicator—and the ROC—a momentum-based indicator—are setting for bearish crosses.

was weaker, as demand was hampered by concerns that the spread of the coronavirus will upend the economic expansion. In addition, reports of a potential Iranian of a tanker in the Gulf of Oman increased worries of a disruption to global oil distribution. 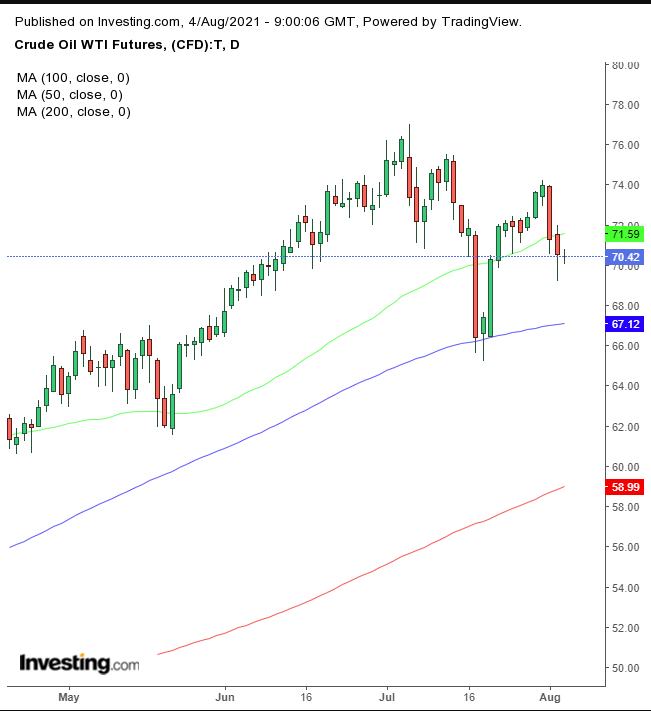 For now, the 100 DMA demarcates the uptrend. If the prices fall below the July 20 low, they will have established a downtrend.