As counting continues in the tightly contested US presidential election on Wednesday, futures on the , and keep wobbling. futures remain firmly in positive territory as investors bet that the technology sector will outperform regardless of the outcome.

Yields are down as risk-averse traders moved into bonds, considered a safe haven in times of uncertainty. The dollar was up slightly.

US futures were volatile ahead of the US session open as no clear winner emerged overnight in the presidential election, despite polls predicting a win by Democratic candidate, Joe Biden. S&P futures were up 0.4% at the time of writing after dropping the same amount earlier, giving up initial gains. We expect continued volatility triggered by every piece of election news ahead of the and into the Wall Street session.

Surprisingly, the , the so-called fear gauge, has declined for the third day, after spiking exactly one week ago 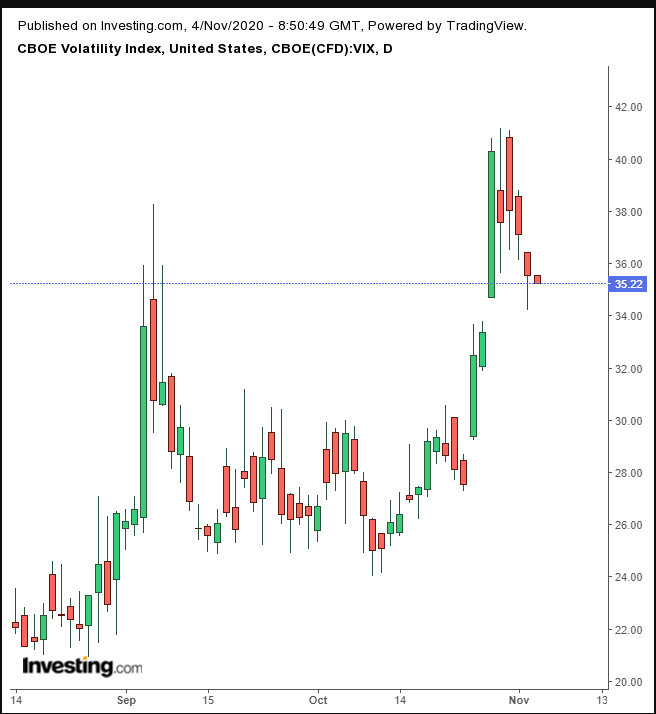 President Donald Trump declared victory early on Wednesday morning, even before several states completed their tallies. He said “,” noting that he is in the lead in several states that have not been finished counting votes, including key swing states Pennsylvania and Michigan. The comments were both incorrect and not considered legally binding.

This rhetoric actualized fears that the President might not accept defeat as he had already refused to confirm that he would respect the outcome of the election. Still, it appears that there was sufficient trading demand to pick up the slack.

In European trading on Wednesday, the index was trading in positive territory, even though the pan-European index dropped at the open as banks, oil and gas, and mining stocks fell when investors exited positions, betting on a Biden win which would ignite growth stocks. From a technical perspective, however, the onus for additional gains will be on the bulls. 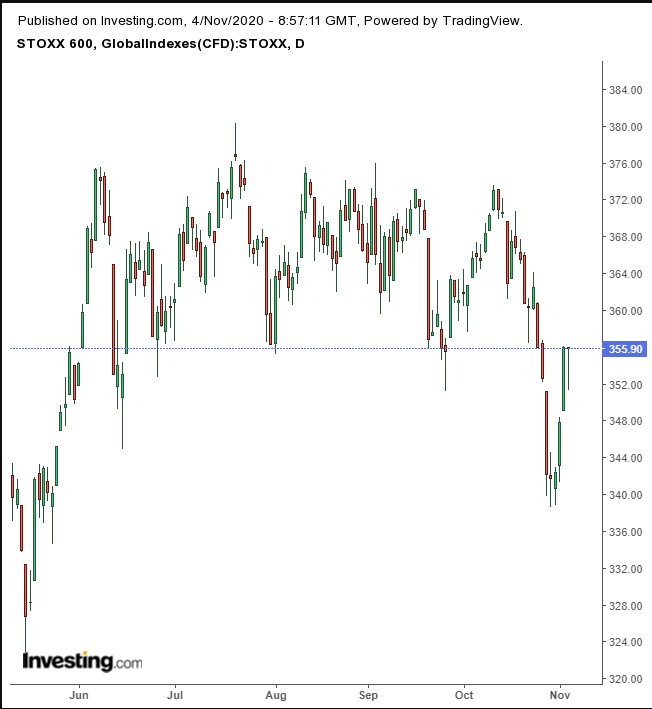 If prices close at these levels, they will have developed a hanging man at the very resistance of a top.

Asia was mixed, with Japan’s locking in a 1.7% gain after opening 1.4% higher as traders played catch up to the recent rally in the US after a Japanese holiday. 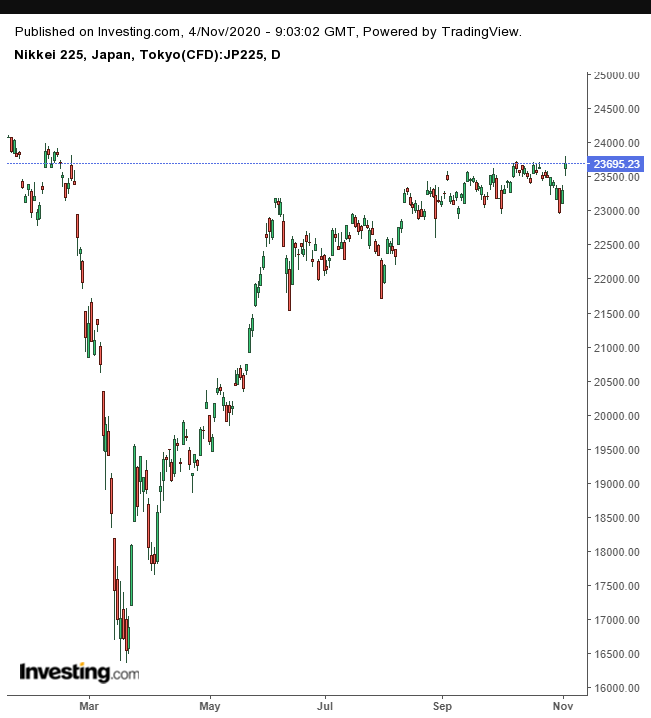 At one point, the Nikkei touched its highest level since February, only to close below October highs, though still at the highest closing price since Feb. 20 which was before the pandemic-driven selloff.

Hong Kong’s underperformed, (-0.2%), as traders sold off after China regulators the anticipated listing of China’s Ant Group citing “major issues.” Investors had already poured $3 trillion into China’s largest technology company pre-IPO, the equivalent of England’s annual economic output, which was set to start trading on Thursday in what would have been the world’s largest Initial Public Offering.

On Tuesday, US equities rallied for the second day, sealing the largest two-day rally since September. Banks were the main driver of the increase as Treasuries, including the , surged on the outlook that Congress will deliver a coronavirus relief package after elections. The advanced 1.8%, or a total of 3.2% for the two days.

Treasury yields dropped after spiking to 0.942, the highest since March. 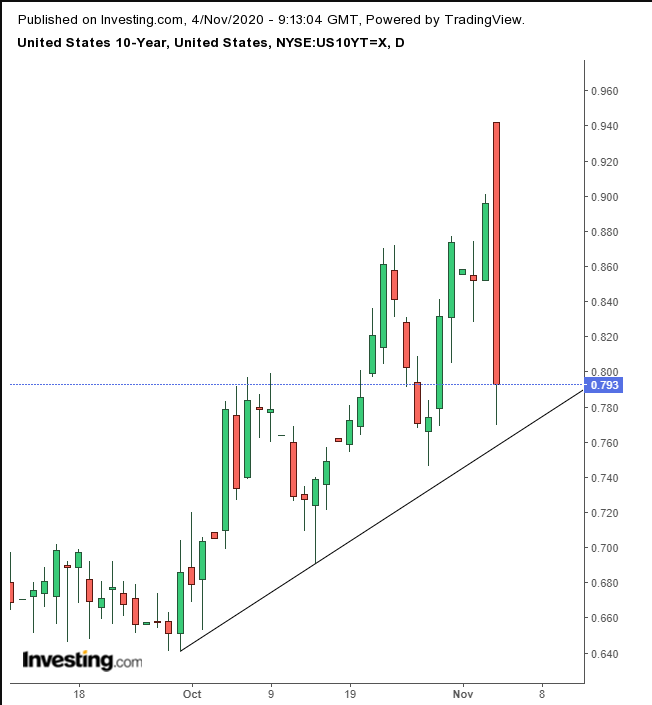 The jumped, coming back from a two day-decline. 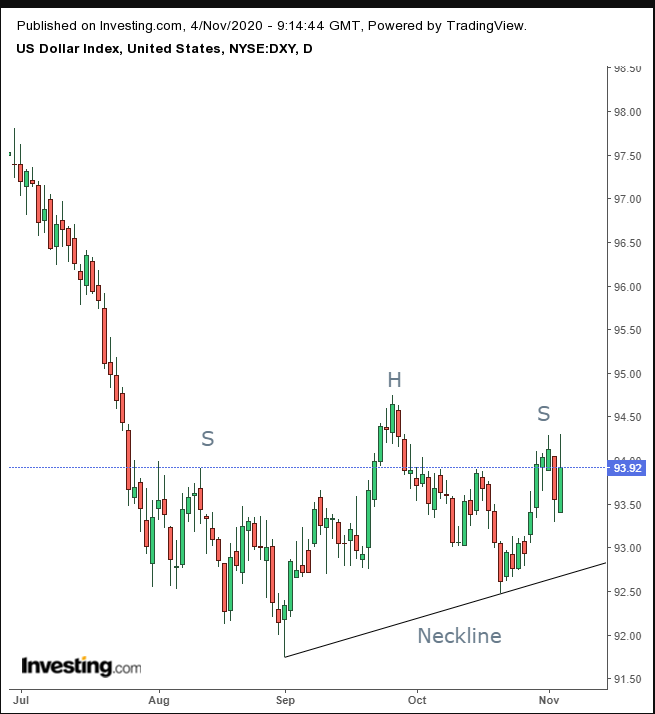 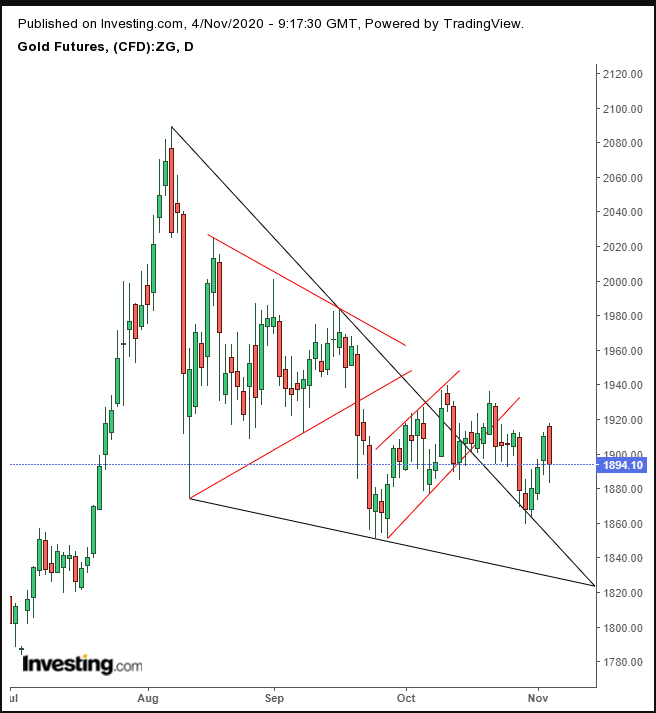 The forces of supply and demand continue to fight it out between two bearish patterns—a triangle, followed by a rising flag—and the bullish wedge. A landslide win in the election, now unlikely, or a Biden-led blue wave would as it increases the likelihood of more robust fiscal stimulus after the election.

was up. The cryptocurrency has in the past few days on news that PayPal (NASDAQ:) and other fintec companies are adding features enabling users to buy and sell cryptocurrencies. 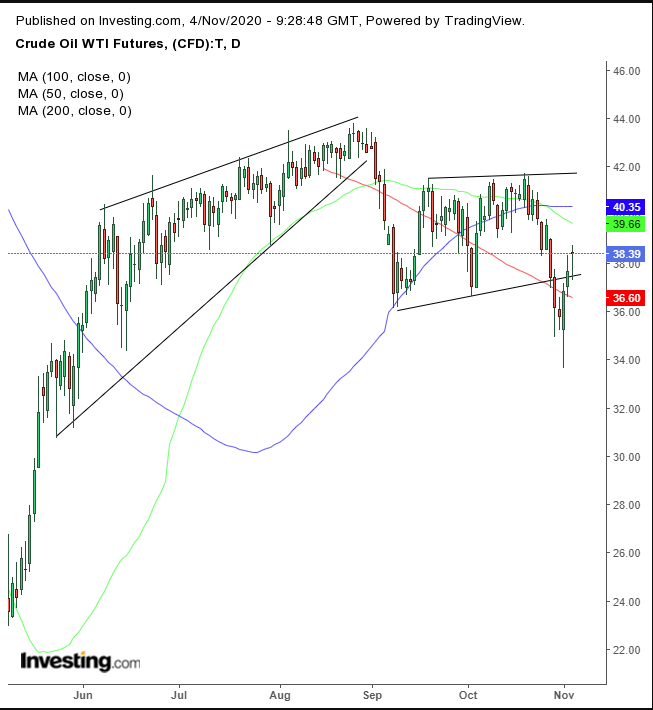 Yesterday’s jump put prices back above the 200 DMA. Today, trading took place back within a range after the price last week broke below its bottom. Currently it’s developing what may prove to be a hanging man, which—with a confirmation of a follow-up candle stick that closes below the hanging man’s real body—is bearish. Its appearance at the bottom of a formation that already broke out suggests further weakness.