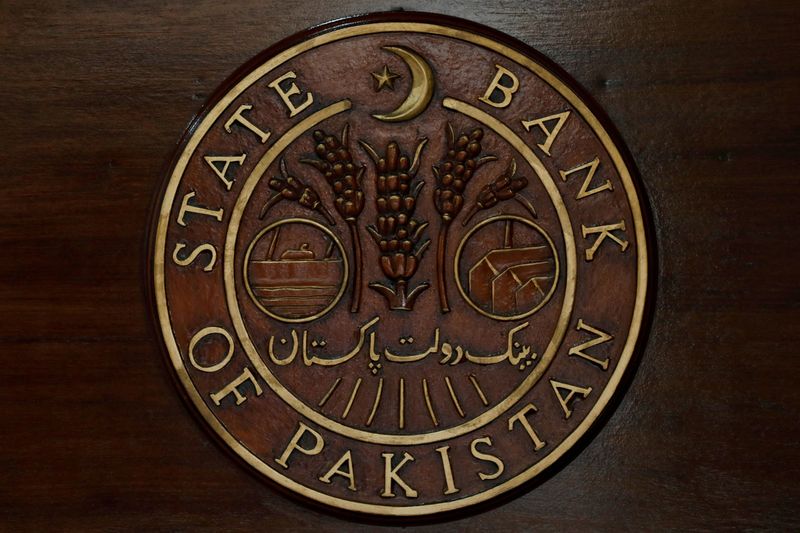 © Reuters. FILE PHOTO: FILE PHOTO: The logo of the State Bank of Pakistan (SBP) is pictured on a reception desk at the head office in Karachi, Pakistan July 16, 2019. REUTERS/Akhtar Soomro/File Photo

ISLAMABAD (Reuters) -Pakistan’s foreign exchange reserves held by the central bank fell $784 million to $6.7 billion as of Dec. 2, the central bank said in a statement on Thursday, as the country struggles to meet external financing needs.

The drop means the nuclear-armed nation’s reserves have fallen further from November’s barely one month of import cover, even as it battles decades of high inflation and scrambles to secure International Monetary Fund (IMF) funds.

“This decline is on account of the payment of US $1,000 million against maturing Pakistan International Sukuk and some other external debt repayments,” the statement said.

It said some debt repayments were offset by inflows, mainly $500 million received from the Asian Infrastructure Investment Bank.

Pakistan is in dire need of funds to cover its current account deficit and debt obligations, for which it needs over $30 billion in external financing this financial year.

Expected funds from the IMF have been delayed as the programme’s ninth review is yet to formally begin.

Pakistan’s finance minister last week hit out at the IMF, saying it was delaying the review despite Islamabad having met all targets. He also said Pakistan would be getting $3 billion from a “friendly country” this month.

Local media reported on Thursday that Pakistan had sought $4.2 billion from Saudi Arabia to shore up its reserves. Saudi Arabia, China and the United Arab Emirates have already parked funds in Pakistan’s central bank to help Islamabad.

Pakistani central bank chief Jameel Ahmad said in a podcast interview on Thursday that all debt repayments are on track and the country’s foreign exchange reserves are expected to increase in the second half of the current fiscal year.