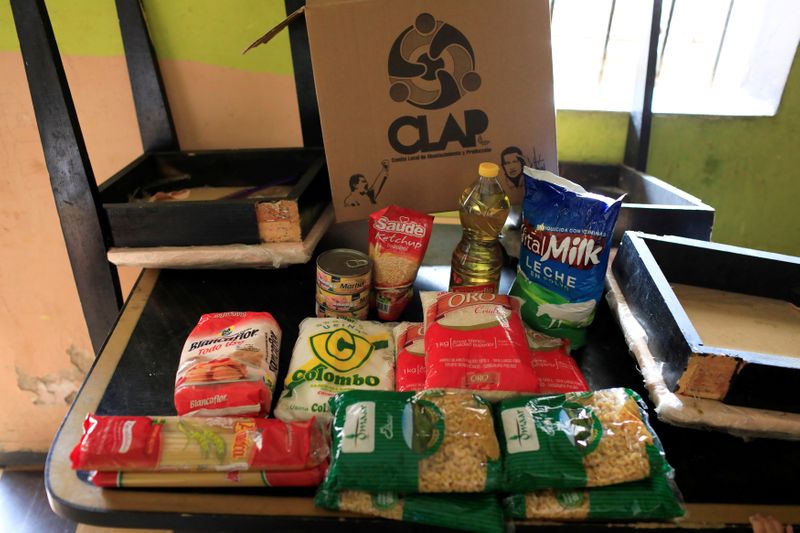 © Reuters. FILE PHOTO: The contents of a CLAP box is pictured at Viviana Colmenares’ house in Caracas

MEXICO CITY (Reuters) – On Aug. 21, a tanker called the Otoman docked at the Jose oil terminal on Venezuela’s coast in the Caribbean to load 1.82 million barrels of heavy crude, according to the state oil company’s internal documents.

Yet no tanker with that name is registered in major global shipping databases.

Muddying the situation further, the unique identifier for the Otoman listed in the documents – a number used by the International Maritime Organization to identify ships – was assigned to another tanker called the Rubyni, according to the databases.

The Rubyni was broken up two years ago, they record. Satellite images provided by TankerTrackers.com, an independent vessel tracking service, show the ship was scrapped on the coast of Bangladesh in 2018.

The misidentification of the Otoman is not an isolated error, according to company documents seen by Reuters, shipping databases and corporate registries, as well as interviews with Iranian state officials and four people close to the state oil producer, Petroleos de Venezuela SA (PDVSA).

Since the United States imposed sanctions on Venezuela in 2019, the state firm and some shipping agencies have been ignoring protocols for checking tanker identity, sources close to PDVSA said. This is part of a smokescreen which, according to one Iranian official, Tehran has helped develop so Venezuela’s oil exports can continue.

The falsely named ship is part of the cat-and-mouse game that Caracas is playing with Washington across the globe.

A previous Reuters investigation found the largest portion of cargoes that set sail from Venezuela since 2019 went to China. The Otoman and other cases show a host of customers in Russia – one of Venezuela’s closest allies – are chartering misidentified vessels to export Venezuela’s oil to Asia.

PDVSA and Venezuela’s oil ministry did not respond to requests for comment for this story.

Asked if the Kremlin was aware of any Russian-based companies involved in trading Venezuelan oil, a spokesman did not respond, although he criticized U.S. sanctions.

“We consider sanctions on Venezuela to be illegal from an international law perspective,” he said. “Venezuela is an important partner for Russia in Latin America.”

An Iranian oil ministry official involved in talks with Caracas said Iran, which has delivered gasoline, condensate, food and refinery equipment to Venezuela, will continue this.

“U.S. sanctions cannot stop us from doing business with each other. New shipments will take place soon,” he said, referring to those supplies. Venezuela has lost most of its capacity to refine its own oil.

The U.S. Treasury, which operates sanctions policy, did not reply to a request for comment. A State Department spokesman said the U.S. government is aware that Venezuela is increasingly turning to Iran for assistance with its oil sector. “These regimes are leading one another down a dead-end street that will not benefit their citizens,” he said.

The Otoman is one of a fleet of more than 30 tankers hired by a group of hitherto unknown companies that have emerged this year as key buyers of Venezuelan crude.

Of 21 new PDVSA customers identified in the state oil company’s internal documents, none has any history in oil trading. Most appear to be based in Russia, but for many, no complete address was recorded. Those with addresses were not to be found at them.

All together, they received over 25 million barrels of Venezuelan crude and fuel between April and October, according to PDVSA records. That’s almost a quarter of Venezuela’s total oil exports and, at market prices for that period, would be worth about $544 million.

In August, the United States moved to step up sanctions on Venezuela’s oil trade, leaving the newcomers virtually the only clients left on PDVSA’s export schedule by October. That made them a lifeline for President Nicolas Maduro’s government.

Until the initial wave of U.S. sanctions in 2019, PDVSA followed rigorous guidelines for registering clients, according to a copy of the company’s procedures reviewed by Reuters.

Customers had to demonstrate at least two years’ industry experience as well as credit-worthiness. Preferred buyers were required to operate refineries, so no middlemen could participate.

PDVSA suspended those rules last year, according to three sources close to the firm.

This makes it increasingly difficult even for company employees to identify customers, the three sources said.

Internal PDVSA documents seen by Reuters showed almost all trace of the customers is erased from company records once they have received a few cargoes.

“Since 2019, we have been ignoring the rules for using the registry, such as requesting supporting documents from companies, and we are now adding phantom clients,” one of the sources said.

The Otoman was chartered by a Russia-based company called Wanneng Munay, according to PDVSA records; the address listed in PDVSA’s databases belongs to the Spanish General Consulate in Moscow, which said in an email it had never heard of Wanneng Munay.

Wanneng Munay did not reply to a request for comment sent by email; its Russia-registered webpage said the site was “under construction.”

This site, as well as that of 14 of the other new buyers of Venezuelan oil, was registered in June by a company called OGX Trading in Moscow, according to Russia’s web registry files. OGX was founded in March and is managed by a Russian entrepreneur, Sergei Basov, the records showed.

Basov said in a phone conversation that OGX Trading planned to enter the food business but had not managed to start during the pandemic.

He is listed as the founder and CEO of at least six companies at the same address in Moscow. Reuters found he has common business interests with a Venezuelan citizen, Betsy Desirée Mata Pereda, who could not be reached directly and did not respond to inquiries for this story sent to her company.

She was also a shareholder in a Turkish firm, Mulberry Proje Yatirim SA, part of a subsidised food box program launched by Maduro in 2016. That company was sanctioned in 2019 by U.S. authorities. They said it was part of a sophisticated network of shell companies that profited from the food program and laundered hundreds of millions of dollars in corruption proceeds around the world.

Russian corporate records show Basov owns a 1% stake in OGX, with the remaining 99% owned by a Dubai-based company, Marlybone Trading DWC-LLC. A Reuters reporter visited Marlybone’s office in the Dubai South Freezone: There was no sign on the door, and the room inside was empty.

In 2018, before U.S. sanctions took effect, Venezuela exported about 1.5 million barrels per day (bpd) of oil, mostly to the United States. The sanctions drove Venezuela’s oil exports to their lowest level in almost 80 years – about 400,000 bpd from June through August.

The new clients prevented oil shipments from collapsing. In September, PDVSA’s exports bounced to over 700,000 bpd, their highest since April.

Until March, PDVSA had mainly traded with units of Russian giant Rosneft (MM:), its export schedules show. That stopped this year when Washington blacklisted shipowners that do business with Venezuela and sanctioned PDVSA’s key customers, including the Rosneft units.

A Rosneft spokesman said the company completely ceased trade in Venezuelan oil in the wake of those sanctions.

After Rosneft pulled out, Maduro’s government deepened its cooperation with Iran. In October, PDVSA for the first time sold crude to Iran’s national oil company.

Beyond trading with Iran, Caracas is borrowing its tactics. These include changing ships’ names and countries where they are registered, turning off location-tracking devices en route, transferring cargoes from ship to ship at sea, transferring ship ownership, and using shell companies to buy and run tankers.

Asked if Iran had helped Venezuela with techniques to maintain oil exports, a second Iranian oil official said, “We have meetings and discuss a range of issues including trade and ways to bypass U.S. sanctions.”

He said changing the flags and destinations of vessels, and ship-to-ship transfers were common.

Besides the companies linked to Basov, three of PDVSA’s new customers were listed in its records as based in Hong Kong. Where addresses were to be found – for example at the addresses listed for the Hong Kong companies – the companies were not known there.

Reuters was unable to determine the ultimate recipients of the oil sold to these buyers. Twenty of the tankers they used listed Singapore as their destination but sailed to waters off Malaysia and Indonesia instead to transfer their cargoes at sea, PDVSA’s schedules and Refinitiv Eikon ship-tracking data showed.

Most of the tankers chartered by the new customers, including the Otoman, sailed to and from Venezuela with their location transponders turned off – a technique shipping experts call a “dark voyage.” A transponder transmits a ship’s unique details, origin, destination and cargo to a satellite.

Travelling “dark” means ships can be renamed while their signal is off, and the new information only becomes available when it is switched back on. This often happens weeks or even months after vessels leave Venezuelan waters.

According to IMO guidelines, disconnecting a transponder is only recommended in exceptional circumstances – such as near a piracy zone – as it increases the risk of collision.

But penalties for shipping infractions can be weak and are infrequently applied.

“If vessels … are flagged by small registry countries, supervision is typically poor, so incidents are not investigated unless somebody comes with a case showing evidence,” said analyst Michelle Bockmann from maritime intelligence firm Lloyd’s List.

Tankers calling at Venezuelan ports have increasingly used the identification numbers of dismantled vessels. In its export schedules for October, PDVSA listed at least two more tankers due to arrive that shipping databases record as broken up: the Lion 1 and the Vinland.

The Lion 1’s transponder signal has not been recorded since late 2018, according to Refinitiv Eikon tracking data. Its owner, Marshall Island-based Vega Marine Ltd-MAI, did not respond to a request for comment.

The Vinland arrived in Turkey to be broken up on July 15, according to Turkey’s Ship Recyclers Association. Greece-based Dido Shipping Company SA confirmed it is being dismantled for recycling since an affiliated company bought it.

“She currently lies half-cut in Turkey,” Dido said in an email, “with her systems and power shut off since July.”