I’ve got to say, I am utterly annoyed with so-called “precious” metals. One would think that, at least in part, the forces behind the explosive rise in cryptocurrency values have the same effect on . Nope! , shown below, is exploding higher, whereas gold is just sitting around picking its nose. The metaphor is just as repulsive as gold’s lackadaisical behavior. 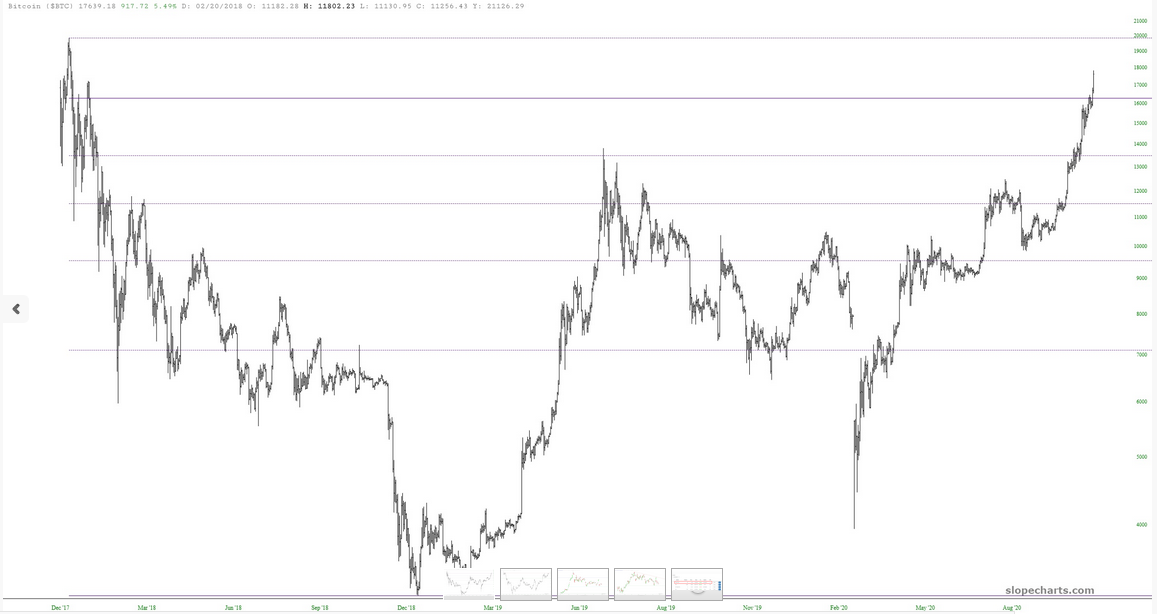 The interesting thing about Bitcoin is its Fibonacci retracement levels. I did a better job explaining myself on my tastytrade show last week than I did on the post on $BTC I did here recently, but my point about the Fibs is that, recognizing their role as support and resistance, the conquering of the 78.2% level cleared the way for an assault to the lifetime high, just below $20,000. That has taken place, so from what I can see, they have “cleared the decks” for an assault to that zone (which itself, if conquered, means the sky is the limit again).

Part of this, I’ve got to believe, can be credited to Paypal’s introduction of crypto on its own site, which obviously blows the doors wide open to any Tom, Dick, or Harry getting involved in the stuff. It has become a purely speculative vehicle. Why do they need to ever re-open Las Vegas with stuff like this available online?

Bitcoin isn’t the only game in town, of course. ($ETH) is looking pretty spiffy too, poised as it is for a potential breakout: (Keep in mind, crypto charts are readily available in SlopeCharts with up to the second data). 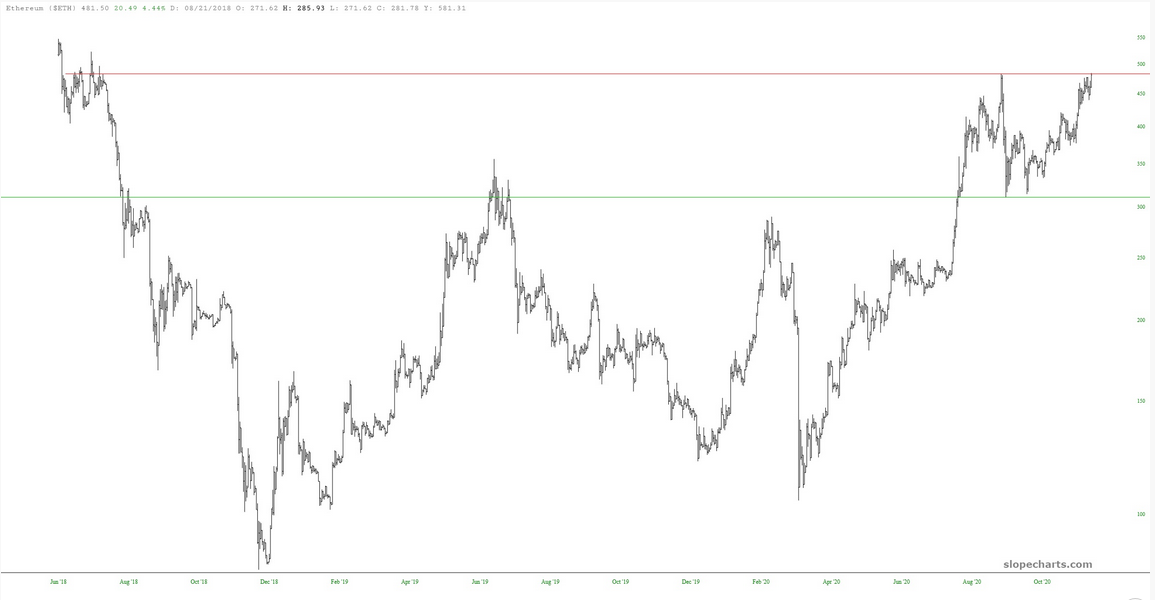 Let me turn my sneer toward gold – – below is GLD (NYSE:). Bluntly stated, its performance is poor, and that light blue support line is pretty much all that is holding it up right now. Break that level, 173.64, and GLD goes from lame to super-lame. 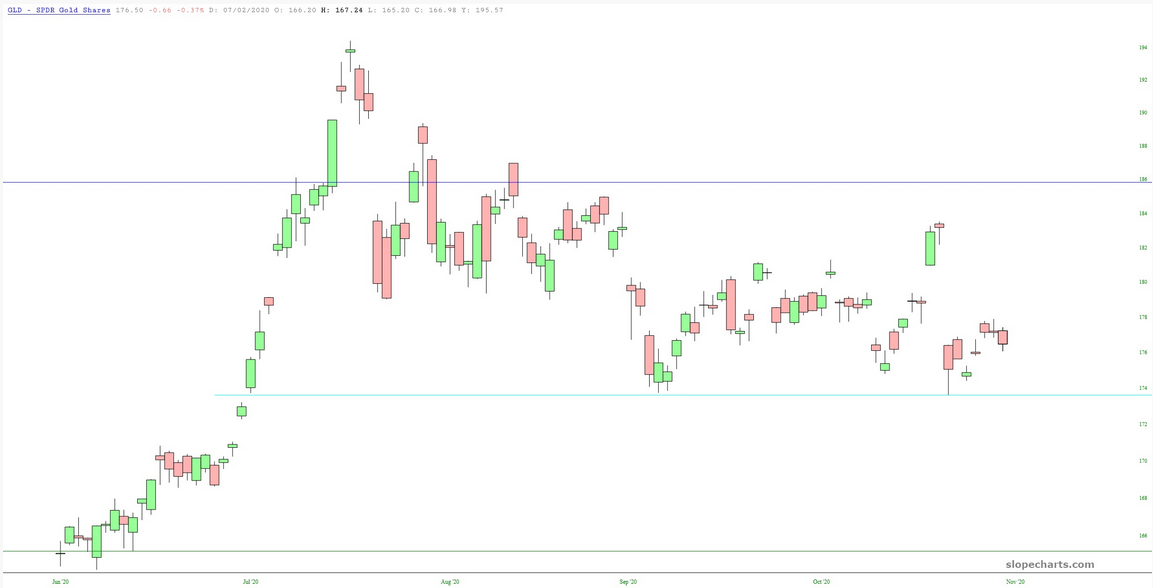 Precious metals miners are even more vulnerable. Here is the GDX (NYSE:). Its corresponding support level is 36.01. Break 36, and blammo. 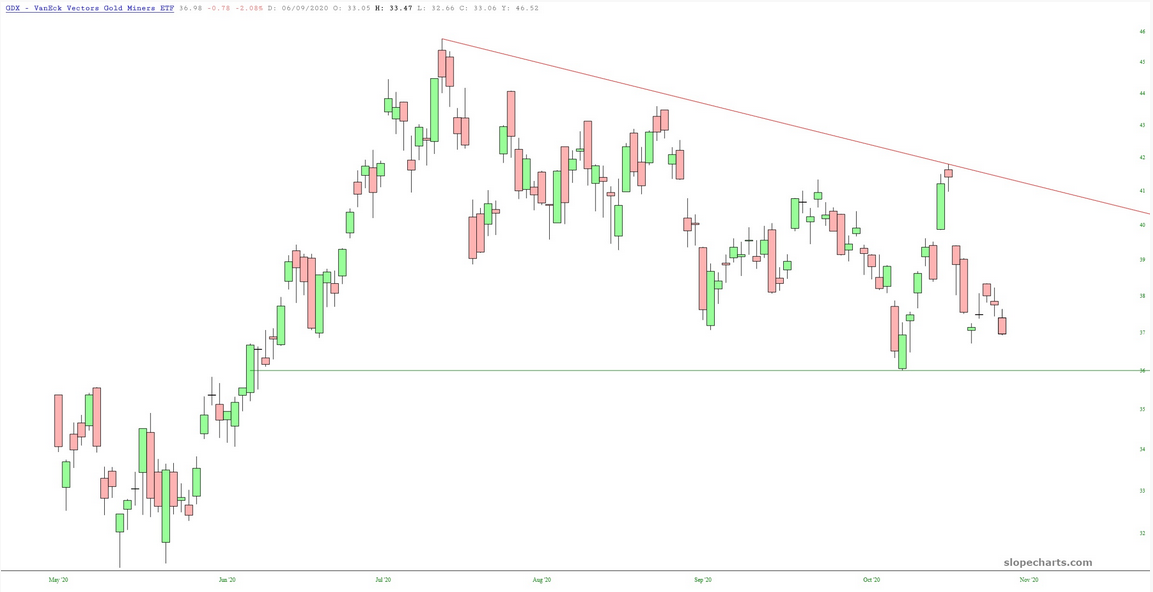 All of which explains my latest virtual position.