Stocks retraced their short-term decline yesterday, but today we may see a lower opening following the earnings releases. Is this a topping pattern?

The index gained 0.98% on Thursday, Oct. 28, as it retraced its whole Tuesday’s-Wednesday’s decline to the support level of 4,550. It got back to the Tuesday’s record high of 4,598.53 yesterday. The daily close was just 2 points below that level. The stock market is still reacting to quarterly corporate earnings releases. Yesterday, we got the releases from Apple (NASDAQ:) and Amazon.com Inc (NASDAQ:), among others. But the first reaction to their numbers was negative. The market seems overbought in the short-term it is most likely fluctuating within a topping pattern.

The nearest important support level is at 4,550, and the next support level is at 4,520-4,525, marked by the previous Wednesday’s daily gap up of 4,520.40-4,524.40. On the other hand, the resistance level is at around 4,600, marked by the new record high. Despite reaching new record highs, the S&P 500 remained below a very steep week-long upward trend line, as we can see on the daily chart (chart by courtesy of http://stockcharts.com): 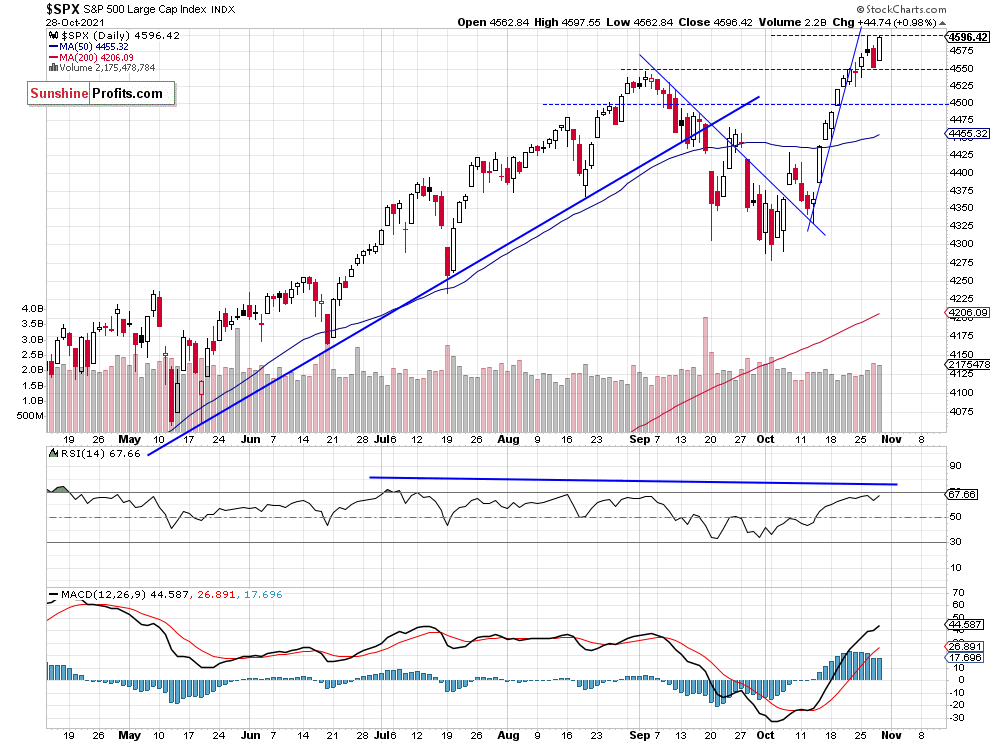 Let’s take a look at the chart. The technology index was relatively weaker than the broad stock market recently, as it was still trading below the early September record high of around 15,700. But this week it rallied to the new record highs. The nearest important support level is now at 15,700, marked by the recent resistance level, as we can see on the daily chart: 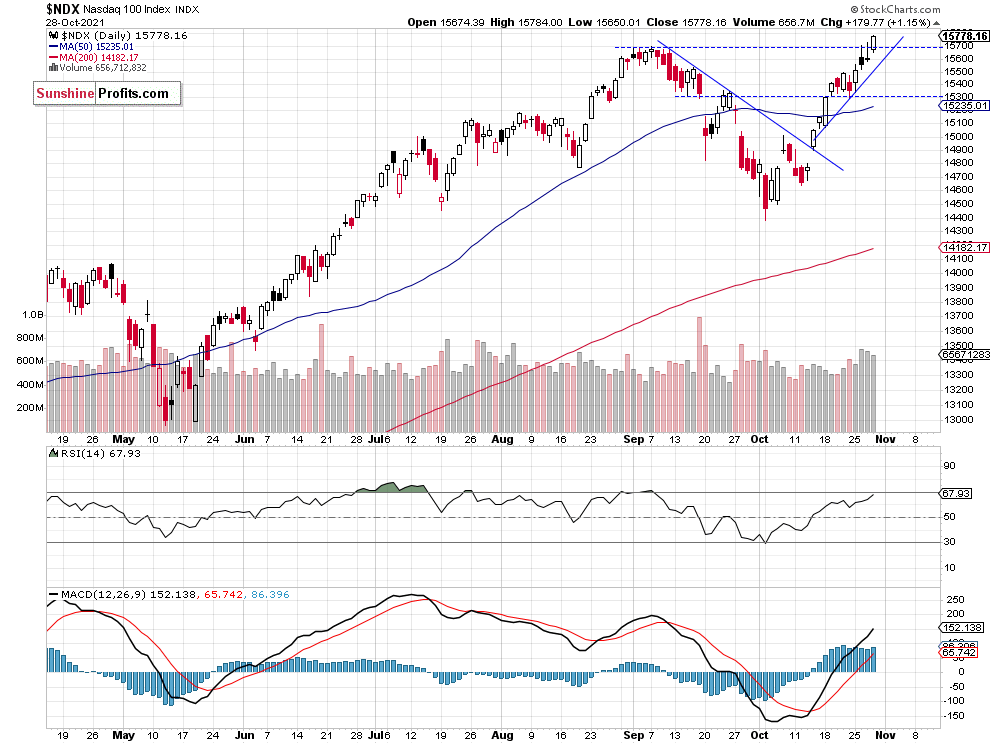 The reached the new record high of 35,892.92 on Tuesday and on Wednesday it sold off to around 35,500. Yesterday the blue-chip index didn’t retrace that decline. The support level remains at around 35,500-35,600, marked by the previous local highs, as we can see on the daily chart: 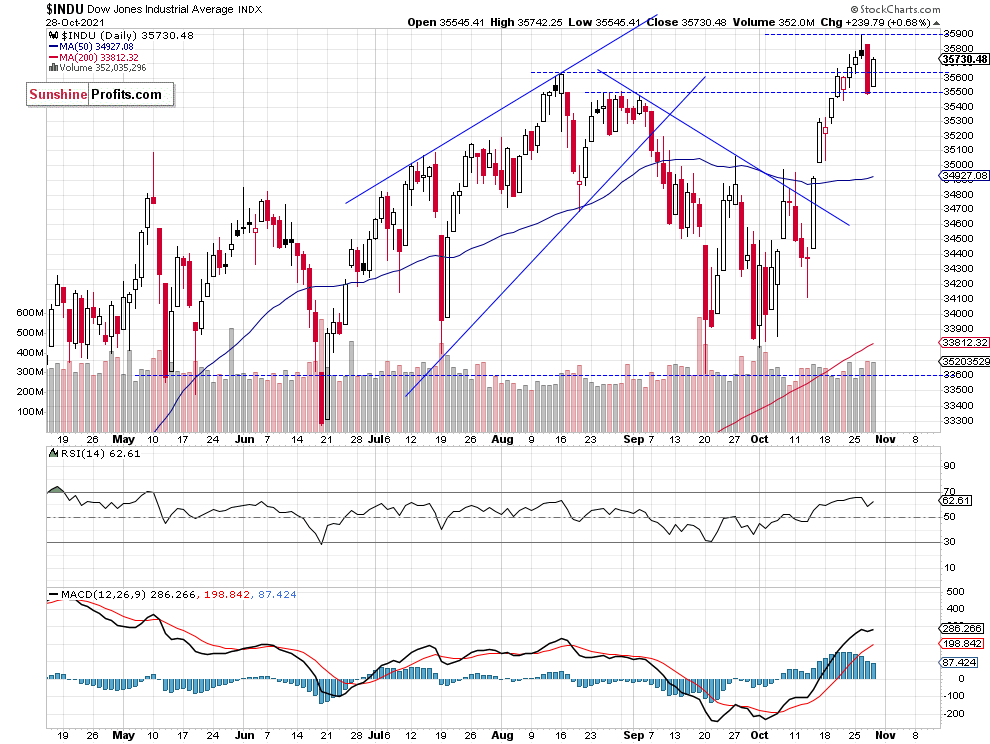 Let’s take a look at the two biggest stocks in the S&P 500 index, AAPL and Microsoft (NASDAQ:). Apple released its earnings after yesterday’s close and the first reaction was negative. But the stock gained 2.50% at yesterday in regular trading hours. The resistance level remains at $154-156. It is still trading below the record highs, as we can see on the daily chart: 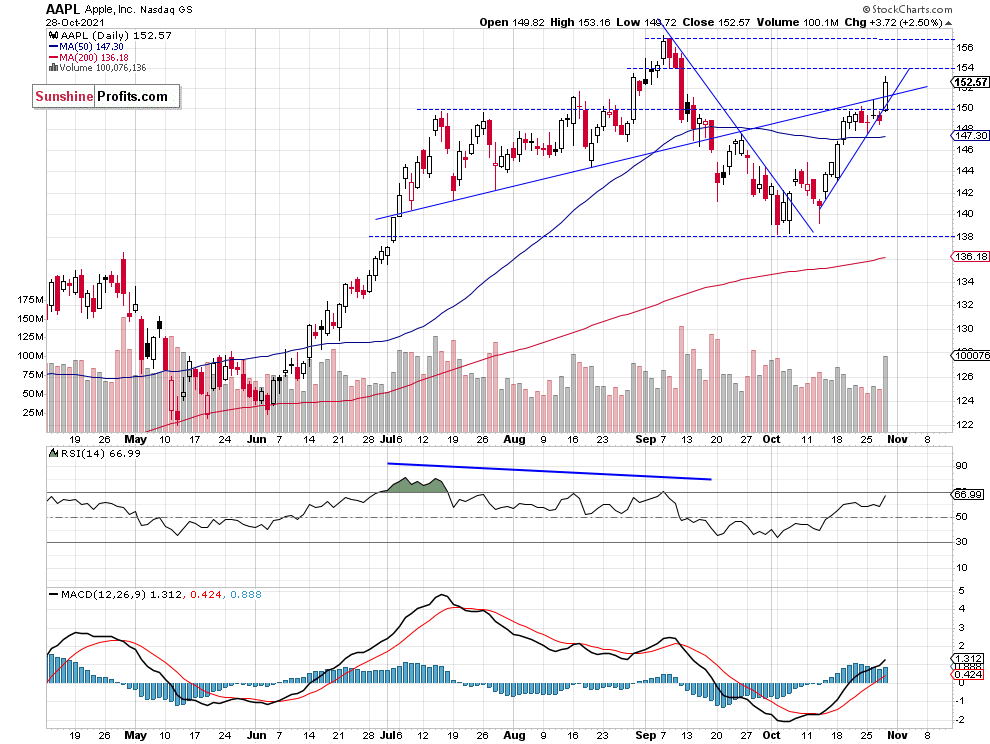 Now let’s take a look at the MSFT. It rallied after Tuesday’s quarterly earnings release and on Wednesday it reached the record high price of $326.10. The market remained above its month-long upward trend line. 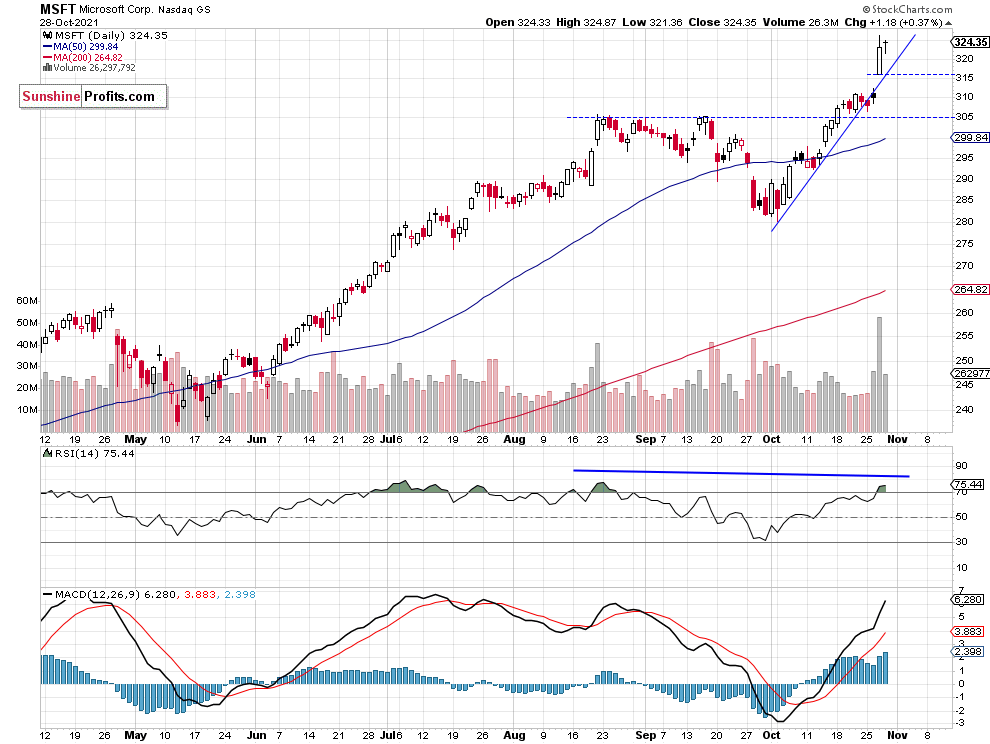 Microsoft extends its long-term hyperbolic move higher. This week it got close to the $2.5 trillion dollar market cap! So the question is how much higher can it get? And it’s already not that cheap at all with its price to earnings ratio of around 40.

The S&P 500 index retraced its Tuesday’s-Wednesday’s decline yesterday and it got close to the Tuesday’s record high of 4,598.53. For now, it looks like a consolidation following an uptrend. However, the market is still overbought and we may see a bigger downward correction. There may be a profit-taking action following quarterly earnings releases. Today the main indices are expected to open 0.2-0.8% lower after yesterday’s earnings releases from AAPL and AMZN, and we will likely see an intraday correction.