Flamingo Finance emulated various DeFi protocols from , rebuilt them on NEO, and repackaged them all under one roof.

Flamingo Finance is a “full-stack” DeFi protocol built on the NEO blockchain, according to marketing materials. Upon further inspection, however, it better resembles a mishmash of top DeFi protocols originally built on Ethereum.

But instead of making a home on the number two network, Flamingo draws liquidity from other major networks thanks to interoperable protocol PolyNetwork.

What it lacks in innovation, it makes up for in the makeup of its audience. Already the protocol has locked in $1.6 billion in value, proving China’s massive appetite for cryptocurrencies and DeFi.

What Is Flamingo Finance?

For those who have been following the DeFi sector in crypto, Flamingo isn’t difficult to understand.

The project is built on five specific pillars, all of which are already in existence in one form or another on Ethereum. Flamingo also offers a native governance token, FLM, which will be discussed shortly.

The first pillar is called Wrapper. It is not dissimilar from popular DeFi projects like Synthetix and Ren, as it allows Flamingo users to create various “n-tokens” pegged to different assets. Supported tokens include Neo, Ontology, Ethereum, and Cosmos-based blockchains like Kava and Terra. Flamingo will soon offer support for .

The second pillar is called Swap and is identical to popular “Constant Product Market Makers,” like Uniswap. The key difference is that Flamingo’s swap only supports NEP-5 tokens, Neo’s equivalent to Ethereum’s ERC-20 token standard.

Like Uniswap, users are also required to supply two-sided liquidity, must pay a 0.3% trading fee (which is distributed to liquidity providers), and use a trading router to improve trade matching.

The third pillar is called Vault and imitates yEarn Finance’s yVault function. Users can stake NEP-5 tokens into the vault and earn the FLM governance token as part of the project’s liquidity mining event, called “Mint Rush.” The event ended on Sept. 30.

Through Vault, Flamingo users can mint a USD-pegged stablecoin called FUSD. Users who mint FUSD will be rewarded in FLM proportionate to the amount minted. This feature is not currently available and will go live on Oct. 28, 2020. 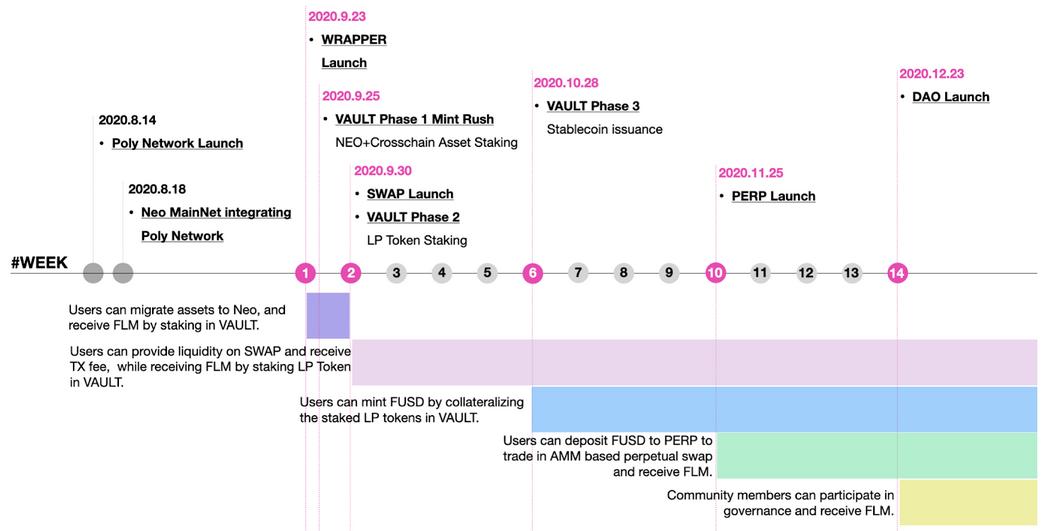 At the time of press, the following pillars are active: Swap, Vault, and Swap. 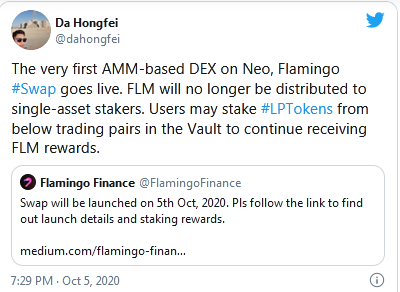 Based on the project’s documentation, there will be 150,000,000 FLM in circulation. This supply isn’t capped, however. Users can earn these tokens at each phase of the Flamingo’s rollout by participating in various network activities.

The most recent activity, called Mint Rush, announced the launch of the first phase of Flamingo. The primary function of this event was to entice ERC-20 token holders to add liquidity to the protocol. The bridge between various Ethereum assets and Flamingo is a tool called Flamingcome.

Users can stake their assets in the tool to earn attractive APYs, n-tokens for interacting in Flamingo, plus FLM tokens. The mechanics of Flamincome allow for further iterations behind the Mint Rush event. Unpacking an example transaction will make this tool more clear.

Users holding an ERC-20 token like USDC can do two things in Flamincome to earn on these tokens. The first leverages the “Optimizer” feature, which turns USDC into an interest-bearing “f-token” called fUSDC. Users can then use f-tokens like fUSDC to interact with the second module called “Normalizer.”

It is through the Normalizer that f-tokens are turned into n-tokens. The latter can be used within the Flamingo ecosystem. 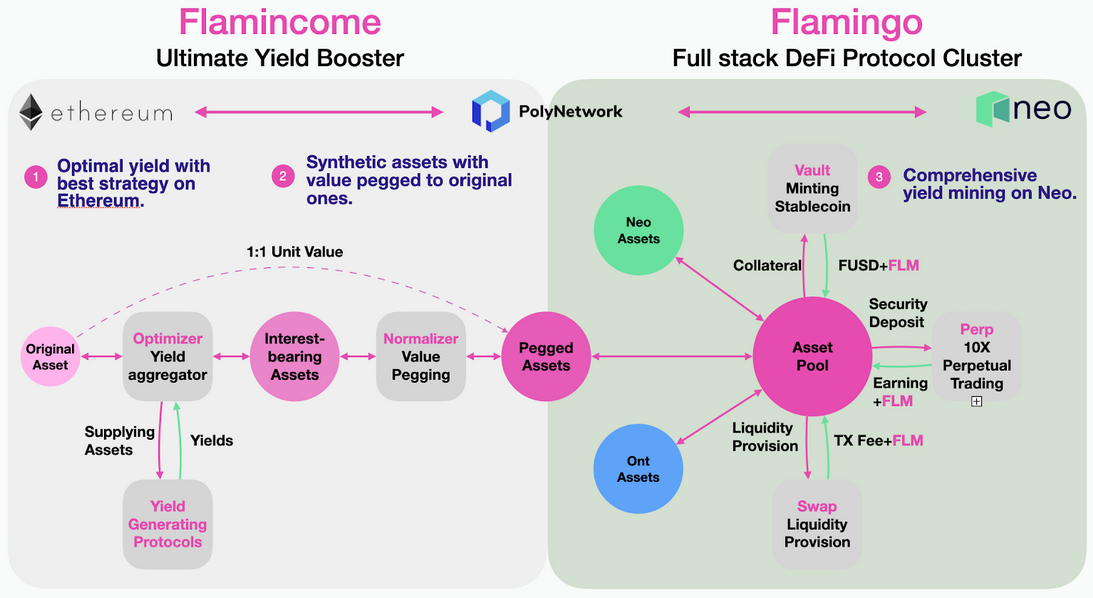 As for the token’s price action, it resembles many yield farming distribution mechanisms. FLM entered the market at a high of $1.59, until plummeting to a current price of $0.37 per token.

Though there are still several different phases to unlock according to the team’s roadmap, it is hard to imagine the launch of leveraged trading and a DAO will do much for price action. The token has also already been listed on large centralized exchanges like Binance, OKEX, and FTX Exchange.

Binance and OKEX also hosted Flamingo and its FLM token on their respective liquidity mining platforms.

As of Sept. 28, the project boasted nearly as much value locked in as powerhouse Uniswap.

The project has earned criticism from members of the Ethereum community for Flamingo’s vampire-like characteristics. Like Compound Finance’s Robert Leshner, critics described it as a SushiSwap attack, but for the entire Ethereum community. 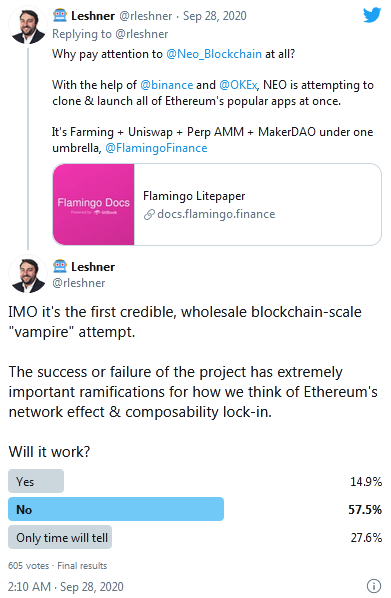 In attracting users with more lucrative returns on their assets, Ethereans would theoretically defect to NEO. However, those familiar with the SushiSwap attack know that these sorts of incentives rarely trump hard-earned community support.

There have been several technical mishaps too. During the Mint Rush event last month, one of Neo’s primary wallet providers, Neoline, crashed due to heightened demand. Da Hongfei, the founder of NEO, eventually postponed the event to recuperate.

Scanning Flamingo’s Medium channel, technical issues related to heavy user traffic appear common. So far, no users have reported any lost funds. Elsewhere on Reddit, users reported issues when wrapping their assets on Flamingo. Many of these issues were resolved, but the launch of Flamingo has so far been rocky.

In the project’s massive Discord channel, there are common complaints regarding entering and exiting the ecosystem. But due to the channel’s chaotic nature, it is difficult to identify which issues are the fault of the user or the protocol. However, it should be noted that many users have failed to understand which wrapped tokens are part of the NEO ecosystem or the Ethereum ecosystem.

This confusion is compounded by genuine UI faults that the channel’s admin frequently relays from the community to the team.

Initially marketed in 2017 as the “Chinese Ethereum,” NEO is primarily a Chinese phenomenon. Similarly, the DeFi movement has also been popular in Asia. The founding team is essentially trying to bring a completed DeFi project to a population of users already interested in exploring the niche.

Based on marketing materials, the primary members of Flamingo are Adam Yang, Gao, and NEO’s founder, Da Hongfei. In a community AMA event, Hongfei also explained that this was one of the first times that the Neo Global Development (NGD) team helped incubate a NEO-based project. Previously, NGD only offered funding and tech support.

“This time NGD participated in the incubation process because some basic modules are needed in DeFi development, and we have to compete against time. Neo3 will be launched around January next year, and we very much need to understand the requirements of the application layer in order to do a good job in the protocol layer.”

Flamingo Finance takes several pages directly from Ethereum’s DeFi playbook. Though they offer little improvements on popular protocols like yEarn, Synthetix, or Uniswap, they hope to achieve market share by bundling each protocol into one platform.

And based on preliminary activity, it appears to be successful.

But as more and more users attempt to join Flamingo, the project’s weaknesses begin to show. This has been in the way of technical errors due to heavy traffic and an unpolished UI, leading to confusion.

The use of various convoluted wrapped token procedures adds to this confusion.

Still, the NEO community is one of the largest in Asia. Thus what Flamingo lacks in innovation and slick user experience, it makes up for in its sprawling community. Whether this is enough to make it a firm competitor globally, remains to be seen.