Retail week keeps rolling along with a mixed shopping cart of earnings this morning. Despite that, stocks look ready to resume their rally thanks in part to more optimism surrounding vaccines and finally some good news for the country’s biggest airplane builder.

There’s also news on an issue that dates back to well before the pandemic. Boeing (NYSE:) shares bounced 6% this morning on media reports that the 737 MAX received Federal Aviation Administration (FAA) approval to fly passengers again starting today. While this is great for BA, obviously, it comes at a time when daily passenger air travel numbers average less than one-third of last year’s levels with no real sign of improvement, according to data from the Transportation Security Administration (TSA). Also, BA faces an uphill battle convincing passengers that the planes are truly safe.

The sizzling rally took a day off Tuesday, and that seems appropriate considering the Index had climbed 10.9% over the last 11 trading sessions. There’s still a lot of enthusiasm around the vaccines, but maybe not enough thought has been given to the logistical factors.

For instance, who determines where the first doses go and to whom? If a particular region gets, say, 100,000 doses, most of those are likely to go first to health care and emergency workers. Having a vaccine is no magic bullet for getting the economy back to normal. That’s going to take many months, most likely. Some of the logistical anxiety appears to be showing up in the market as people continue to buy bonds (see more below).

Also, there’s been no traction in Washington, D.C., regarding stimulus. Both sides appear far apart, and while something could potentially happen, a lot of investors seem resigned to waiting until after Jan. 20. On the plus side, it looks like the sides might at least talk again soon, but we’ll have to wait and see.

TGT’s today offered something for everyone, including huge beats on earnings per share and revenue, amazing same-store sales growth of nearly 10%, huge gains in digital sales, and triple-digit increases in curbside pickup and home delivery. Put TGT up there with Walmart (NYSE:) on the list of retailers who seem to be rolling with the punches as they adjust their business models to deal with the virus. This could be even more important in the current quarter as many states start shutting down again. TGT shares rose about 2% in pre-market trading.

LOW’s were far from terrible, with same-store and online sales both looking solid. Like Home Depot (NYSE:) yesterday, rising costs ate into earnings per share, however. Investors also seem to be punishing the stock this morning because the company’s outlook wasn’t so great. The lesson seems to be that when it comes to earnings reception on Wall Street, you can be good, but good isn’t always enough.

Looking at the retail earnings that came out yesterday, there’s little doubt that HD and WMT both had phenomenal quarters. The question is why did investors punish their shares? It might be a bit psychological.

The two companies that were expected to do well (WMT and HD) almost couldn’t have done well enough to please investors. So just beating Wall Street’s expectations might not have seemed good enough. This is a phenomenon we’ve seen a lot this year, where companies beat projections but the stocks fall, maybe because there were “whisper” numbers circulating about possibly even better results. Sometimes the market acts like a spoiled child, always wanting another candy cane.

On the other hand, when a company like Kohls (NYSE:), which few expected to do well, actually does have a good quarter, they tend to get rewarded. KSS shares rode its earnings report to an 11% gain Tuesday. People didn’t have such high expectations, so the came as a pleasant surprise. Actually, it might have been less the KSS results and more the future plans and predictions the company made on its call that excited investors. While earnings per share did easily beat expectations and that was nice to see, it was also good to hear executives sound positive about the holiday season.

The week’s retail earnings rush isn’t over yet. Macy’s (NYSE:), Ross Stores (NASDAQ:), and Foot Locker (NYSE:) are all expected to share results in coming days.

In other sectors, Financials got a dose of bad news Tuesday as bond yields continued to pull back from last week’s firm rally where they flirted with 1%. While bank stocks had a mixed day, it doesn’t look as hopeful now as it did a week ago for the sector to get a huge burst of yield-related energy. Pandemic concerns, lack of stimulus progress, and Tuesday’s disappointing October retail sales report all might have contributed to the 10-year yield sinking back below 0.9%. It’s near 0.85% this morning despite stocks turning green ahead of the opening bell.

Not all of this week’s data disappointed. Industrial production increased 1.1% in October, beating Wall Street’s expectations. There was also some strong housing data, and business inventories rose. The data train keeps rolling today with housing starts and building permits, sometimes a good barometer of consumer sentiment for the near future.

Despite the rise in bonds this morning, volatility remains on the downswing. The Cboe Volatility Index () got smashed and is down below 22, near the August lows.

This whole narrative that everyone is jumping into value from Tech? We’ll see. The sector shift from growth to value we’ve heard so much about this week didn’t find much traction on Tuesday, a day when almost every sector dipped. People are still trying to figure out how this rotation is going to end up, but there’s no clear winner yet.

So-called “value” stocks—which are clustered in some of the “reopening sectors” like Finance and Energy—outpaced growth in October even before the vaccine news. Some analysts told the media this week they’re worried value could be out over its skis after this sharp rally, especially as we head into winter with shutdowns spreading and a long wait before vaccines become available.

In one sense, it’s really nice to see value making a comeback, because a broader rally is generally healthier than the one we saw over the summer where Tech’s rising tide didn’t come close to lifting all boats. And you could argue that sectors like Energy and Financials have room to run, considering relatively low valuations.

On the other hand, these sectors have come a long way very quickly, which could lead to profit taking. Any profit-taking in the near future is liable to correspond with a time of year when holidays dominate the calendar and volume tends to be thinner. That can sometimes make price moves more dramatic in one direction or the other, so consider taking extra care if you’re trading. 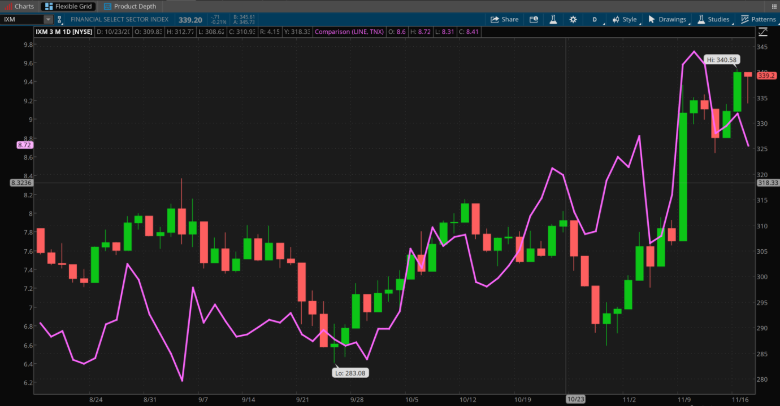 Chart source: The thinkorswim® platform from TD Ameritrade. For illustrative purposes only. Past performance does not guarantee future results.

Chart of The Day: What’s Next For Financials

The Financial sector (IXM—candlestick) took a wild ride higher last week on vaccine news and a spike in the 10-year yield (TNX—purple line). Now the 10-year yield seems to be leveling off, and Financials had a mixed day Tuesday. What happens next for the sector could be dependent on next steps for that purple line, so stay tuned. Data Sources: Cboe, S&P Dow Jones Indices.

Another earnings report to potentially watch comes this afternoon when chipmaker NVIDIA (NASDAQ:) reports. Its heavy exposure to the video gaming industry has made NVDA one of the best chip performers of the year, and most of the chip sector continued to do well over the last month even as Tech retreated.

Why? It could be dollar-related, to some extent. The dollar has recently fallen to its lowest level vs. the Chinese currency in more than two years, something that’s probably quite helpful for companies like NVDA that have such a huge exposure to the Asian country. As we saw earlier this week, China’s economy continues to bounce back from COVID-19, which could be raising demand from chip company customers there. The fast comeback for China also could be one reason the yuan is gaining on the dollar lately.

Also, a weaker dollar gives these companies an extra burst of tailwind by making their products less expensive for overseas buyers. The recently traded below 92.50, not far above the August lows that marked the weakest dollar since April 2018. Investors will likely listen closely to NVDA’s call for insight into Chinese demand. It could also be interesting to hear what NVDA and other Tech company executives have to say about how they see the China trade situation shaping up under a Biden administration after the trade battles experienced under Trump.

Yesterday’s disappointing October retail sales headline growth was another chapter in a long, tragic novel for brick-and-mortar stores. If you dig beneath the overall 0.3% headline October growth, it’s easy to see a bifurcated picture of the U.S. retail sector. The gap started forming long before COVID-19, but the pandemic just intensified that trend. October sales at online merchants rose 3.1%, a healthy figure that probably reflects an earlier than normal start to holiday shopping due in part to Amazon’s (NASDAQ:) Prime Day. But restaurants, clothing, and sporting goods stores where people tend to go in person all saw sales drop, continuing a trend that’s hurt businesses where people have to get closer together to buy and sell.

Of course the pandemic has a lot to do with that, and it’s possible shoppers could come flocking back eagerly once there’s a vaccine. But habits, once set, can be hard to change. Many big box stores have found they can save money by selling more goods online and then delivering them or having customers pick them up at the curb. This obviously is not a great scenario for indoor malls and the stores that inhabit them, and it’s hard to see the trend changing a lot once COVID-19 retreats now that customers have found such a convenient way to shop. Macy’s and Foot Locker (NYSE:) both report later this week, so consider listening to their calls for insight into the brick-and-mortar world.

Yesterday was kind of an odd day for the crude market, which finished mixed. U.S. managed to keep its head above the psychological $40 level, but suffered a few cracks in its armor when OPEC+ held a committee meeting on Tuesday that stopped short of recommending any output changes. Some analysts had expected OPEC+ to put a plug in plans to taper existing production cuts by around two million barrels a day. That didn’t happen. The group gets back together at the end of the month, so it looks like they kicked the can down the road.

On Wednesday, crude climbed as investors awaited the latest weekly supply data from the U.S. government. Crude rose by more than four million barrels last week and remain about 6% above the five-year average, according to the Energy Information Administration. Gasoline supplies are also higher than normal. So at least for now, it doesn’t look like any supply issues could raise prices much going into the holiday season, especially with COVID-19 limiting travel. Not the best news for Energy stocks, though that sector has been one of the best performers the last two weeks.