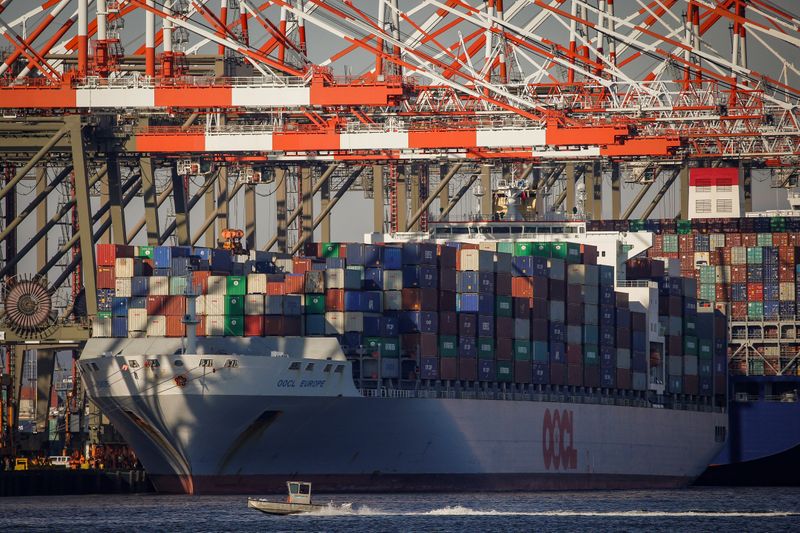 © Reuters. The OOCL Europe is docked at the Port of Newark in Newark, New Jersey

WASHINGTON (Reuters) – The United States’ trade deficit in goods narrowed sharply in September and inventories at retailers surged, sealing expectations for record economic growth in the third quarter after the worst performance in at least 73 years.

The data from the Commerce Department on Wednesday added to reports ranging from retail sales, durable goods orders and housing that suggested the economy has regained some footing, though gross domestic product would still likely remain below the department’s forecast for the fourth quarter.

The anticipated surge in GDP was driven by a more than $3 trillion government rescue package early this year, which provided a lifeline for many businesses and the unemployed as the COVID-19 pandemic disrupted the economy. The fiscal stimulus has since been exhausted, leaving the outlook for the fourth quarter murky amid a resurgence in new coronavirus cases.

The government is scheduled to publish its advance GDP growth estimate for the third quarter on Thursday, five days ahead of the U.S. presidential election next Tuesday.

“We should remember output will be below that of the end of fourth quarter of 2019,” said James Knightley, chief international economist at ING in New York. “There is a long way to go before the economy is fully healed and unfortunately the challenges are mounting.”

The goods trade deficit decreased 4.5% to $79.4 billion last month. Exports of goods increased 2.7% to $122 billion, led by a surge in shipments of foods, feeds and beverages. There were also increases in exports of motor vehicles, consumer and capital goods. Exports of industrial supplies fell.

September’s decrease in the goods trade deficit after two straight monthly increases suggested trade would be a smaller drag on GDP growth than had been anticipated earlier. The trade hit to output could also be offset by accumulation of inventories.

Stocks at retailers jumped 1.6% last month after gaining 0.5% in August. Retail inventories excluding autos, which go into the calculation of GDP, rose 0.9%.

The trade and retail inventory data put a upside risk to the third-quarter GDP growth estimate. According to a Reuters survey of economists, the economy likely grew at a 31% annualized rate in the July-September quarter.

The anticipated historic growth pace would follow a 31.4% pace of contraction in the second quarter, the deepest decline since the government started keeping records in 1947.

“It will still likely take until the third quarter of 2021 for real GDP to regain its level of the fourth quarter of 2019,” said David Kelly, chief global strategist at JPMorgan (NYSE:) Funds in New York.

Facebook
Twitter
Pinterest
WhatsApp
Previous articleEU arms itself against U.S. and others in trade disputes By Reuters
Next articleProtect and serve? The dilemma of reissuing lost or frozen DeFi tokens