is projected to increase 4.1% (seasonally adjusted annual rate), based on the median nowcast via a set of estimates compiled by CapitalSpectator.com. That’s a small fraction of the record 33.1% surge in Q3, which followed a massive 31.4% loss in Q2. Looking ahead, for the first time since the coronavirus shock began in March the quarterly GDP report looks set to post results that are relatively routine vis-à-vis the dataset’s history. 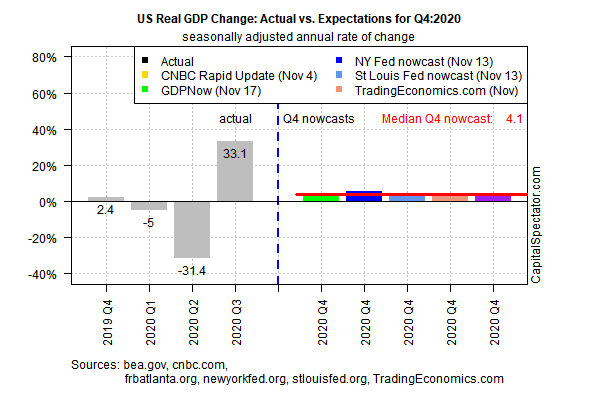 Ignoring the extreme changes in Q3 and Q2, the current median 4.1% nowcast for the last three months of 2020 ranks as a strong increase. For the decade through Q1:2020, the strongest GDP increase reported is 5.5% and so by that standard the current Q4 estimate is one of the best gains in recent history.

But there are two key caveats to consider. First, the current quarter is only half over and so a lot can change to alter the GDP outlook between today and the end of the year. The main risk factor, of course, is the resurgence of coronavirus.

Keep in mind, too, that even if the economy expands by 4.1% in Q4, some of this relatively strong gain still reflects a bounce-back effect following the extraordinary economic loss in Q2. In other words, it’s not yet clear if a 4.1% rise in output in Q4 (assuming it materializes) is a sign that comparatively firm economic activity is sustainable.

Nonetheless, the current median nowcast for Q4 is encouraging. Looking to prospects for 2021, recent upbeat news on vaccine development is boosting confidence that the economy will continue to recover.

“My big concern was that we would see slow growth for a long time because it would take time for the economy to adjust,” says Gus Faucher, chief economist at PNC Financial Services. “If we have a viable vaccine, then we don’t have to do as much restructuring.”

Despite the potential for upbeat economic results, the next several months will present a challenge as the coronavirus rebounds. Although a vaccine may be coming soon, the earliest forecasts are for a spring rollout to the general population and that’s the best-case scenario. Meantime, Covid-19 cases, deaths and hospitalizations are rising sharply and so the near-term economic blowback could be substantial.

It’s unclear how vulnerable the current economic recovery is to coronavirus risk, but the threat is significant. Masayoshi Son, CEO of Softbank, the multi-billion-dollar investment firm, thinks the near-term outlook appears dicey. “In the next two [to] three months, any disaster could happen,” he said on Tuesday at a financial conference. Explaining that he expects the Covid-19 pandemic will bring trouble for companies in the months ahead, Son said he’s raising cash for a “worst-case scenario.”