Remy Cointreau cautiously optimistic on China amid lockdowns By Reuters 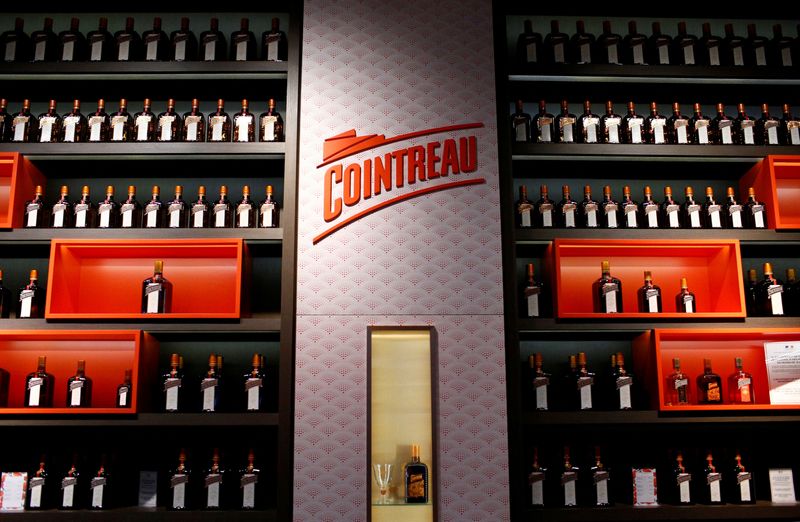 © Reuters. FILE PHOTO: Bottles of Cointreau, the orange-flavoured triple sec liqueur, are displayed in the Carre Cointreau at the Cointreau distillery in Saint-Barthelemy-d’Anjou, near Angers, France, February 8, 2019. REUTERS/Stephane Mahe/File Photo

PARIS (Reuters) -Shares in Remy Cointreau fell as much as 4% on Thursday after the French spirits maker said it was “cautiously optimistic” about the Chinese market where COVID-19 continues to trigger lockdowns.

The maker of Remy Martin cognac and Cointreau liqueur posted a stronger-than-expected 27% jump in first-half operating profit but stuck with its guidance for a slower second half as consumption trends return to more normal levels.

CEO Eric Vallat said he was “cautiously optimistic” about business prospects in China ahead of the Chinese New Year as on-again, off-again lockdowns clouded the outlook.

China on Thursday logged a record rise in COVID infections.

Vallat added he was confident in China in the longer-term due to strong appetite there for its premium cognacs as well as its whiskies.

“In China, we are making sure we are flexible, so far we have adapted successfully to the situation,” he said.

“If, after two exceptional years, the trend is towards the normalisation of consumption trends, probably until Q1 23-24 and if China remains challenging, Remy Cointreau continues to be an exceptional value for the spirits sector,” MidCap analysts said in a note.

The company has seen two years of exceptional growth as the pandemic accelerated a shift towards premium drinks, cocktails and e-commerce as people drank more expensive drinks at home.

Operating profit for the six months to Sept. 30 came in at 319.3 million euros ($333.1 million), outperforming a company-compiled consensus of 306 million euros.

Operating profit at its cognac division, which accounts for nearly 90% of group profit, surged 36% to 299.7 million euros in the first half.

The company expects “low double-digit sales growth” for the full year with a slower pace of growth in the third quarter before picking up again the fourth, Vallat told reporters.

The company had previously reported a 21.1% jump in first-half sales, boosted by a recovery in demand for its top cognac brands in China during the country’s Golden Week holidays.