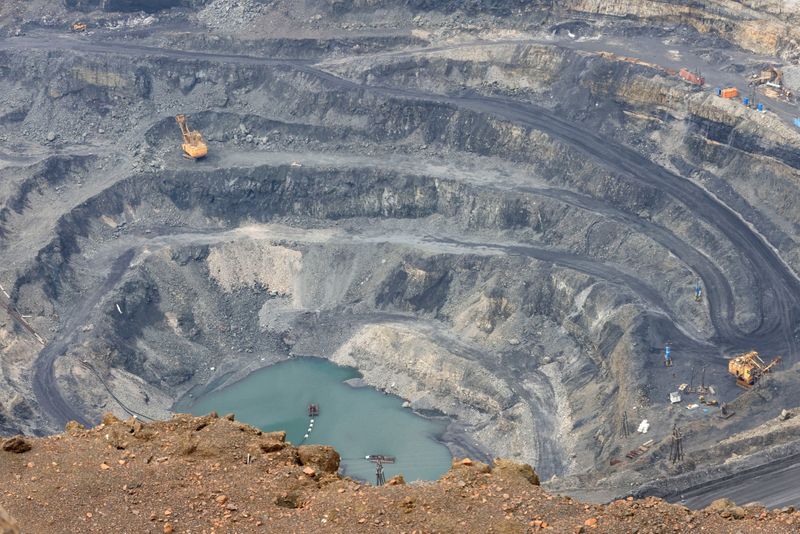 © Reuters. FILE PHOTO: A general view shows Zapolyarny mine of Medvezhy Ruchey enterprise, which is a subsidiary of the world’s leading nickel and palladium producer Nornickel, in the Arctic city of Norilsk, Russia August 24, 2021. REUTERS/Tatyana Makeyeva/File Phot

The ministry simultaneously proposed a reserve option, a formula-based profit tax that would depend on the size of firms’ previous dividends and investments at home, the sources said.

Moscow has been searching for additional proceeds for the state budget and has been concerned about rising costs of defence and state construction projects amid high inflation and increasing prices for metals.

President Vladimir Putin in March urged Russian exporters of metals and other big firms to invest more for the good of the country.

The producers will meet First Deputy Prime Minister Andrei Belousov to discuss the issue on Saturday, Interfax news agency reported, citing unnamed sources. At a meeting on Wednesday, they asked the finance ministry to leave the MET as it is and base the tax system on their profits.

The MET, if approved by the government, would depend on global price benchmarks and the amount of mined product, the sources said. It would affect fertilisers; iron ore and coking coal, which are raw materials for steel production; and nickel, and platinum group metals, which Nornickel’s ore contains.

The reserve option, if approved, would raise the profit tax to 25%-30% from 20% for companies that spent more on dividends than on capital expenditures in the previous five years, three of the sources said.

State-controlled companies would be excluded from such a decision, as would subsidiaries of holdings whose parent company holds 50% or more in them and returned half or less of dividends from subsidiaries to its shareholders over the five-year period.

The finance ministry, the government, Nornickel, and the main producers of steel and fertilisers all declined to comment.

It remains unclear how much the MET change or the profit tax change would bring to the state coffers.

Russia raised the MET for metals firms from 2021 and then imposed temporary export taxes on Russian steel, nickel, aluminium and copper that will cost producers $2.3 billion from August to December 2021.