Sign up to myFT Daily Digest to be the first to know about Russian economy news.

Russia’s central bank has raised its key lending rate by 1 percentage point, its largest increase for more than six years and the fourth consecutive tightening of policy in a bid to put a lid on rising inflation.

The central bank said on Friday that it would raise its main lending rate to 6.5 per cent. Since March the rate has increased by 2.25 percentage points.

Despite this, rising prices of key household goods have pushed inflation to levels not seen for almost five years, putting pressure on Russian wallets and vexing the Kremlin as it prepares for a parliamentary election in September.

Annual inflation stood at 6.5 per cent in June, the bank said last week, its highest level since August 2016 and up from 6 per cent in May.

A faster-than-expected economic recovery from domestic pandemic lockdowns, a surge in global commodity markets and a weaker rouble have all contributed to the rising prices, despite efforts by the government to freeze the cost of key goods.

In a statement after the rate decision was announced, the central bank said: “Inflation is developing above the Bank of Russia’s forecast . . . This largely reflects the fact that steady growth in domestic demand exceeds production expansion capacity in a wide range of sectors. In this context, businesses find it easier to transfer higher costs to prices.”

Despite the move, the central bank expects the pace of inflation to continue to increase, and warned it could take further action as a result. “If the situation develops in line with the baseline forecast, the Bank of Russia will consider the necessity of further key rate increase at its upcoming meetings,” it said.

Food prices are an acute political issue for President Vladimir Putin’s government in a country where memories of hyperinflation and rationing are only a generation old. Real household incomes have fallen for five of the past seven years and 20m people — one in seven — live below the poverty line. 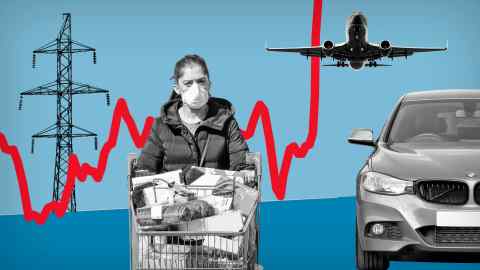 In a bid to protect poorer citizens from rising global commodity prices, Moscow has imposed price caps on some staple food products and is considering new export quotas or additional duties on other goods. This week some Russian bread producers reportedly said they would raise prices by about 10 per cent to offset higher costs and what they claimed were inadequate state subsidies.

“With inflation being the sole target for the [central bank] and the conservative approach well tested pre-crisis, it is easier to hike than not to hike for the [bank] now if hesitating about the balance of factors behind prices growth and a persistency of inflation,” wrote Sofya Donets, Russia economist at Renaissance Capital, in a note to clients this week.