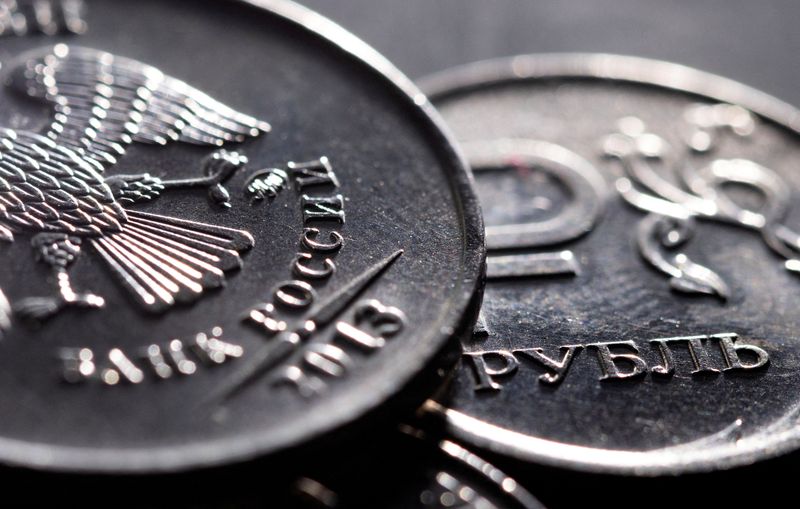 By Guy Faulconbridge and Karin Strohecker

LONDON (Reuters) -Russia said on Sunday that sovereign bond payments will depend on sanctions imposed by the West over the invasion of Ukraine, raising the spectre of its first major default on foreign bonds since the years following the 1917 Bolshevik revolution.

Russia’s finance ministry said it would service and pay sovereign debts in full and on time but that payments could be hampered by the international sanctions.

“The actual possibility of making such payments to non-residents will depend on the limiting measures introduced by foreign states in relation to the Russian Federation,” the finance ministry said in a statement.

That raises the possibility of a technical default on debt by Russia after much of its $640 billion in reserves were frozen by the West after President Vladimir Putin ordered what Russia describes as a special military operation in Ukraine on Feb. 24.

From now on, Russia will use roubles to make payments to residents on bonds denominated in foreign currency, the ministry said.

The finance ministry in Moscow also explicitly said that Russia might not be able to make bond payments because of restrictions imposed by the Russian government.

Russia in 1998 defaulted on $40 billion in domestic debt and devalued the rouble under President Boris Yeltsin because it was effectively bankrupt after the Asian debt crisis and falling oil prices shook confidence in its short-term rouble debt.

This time, Russia has the money but can’t pay because the reserves – the world’s fourth largest – that Putin ordered be built up for just such a crisis are frozen by the United States, European Union, Britain and Canada.

It could be Russia’s first major debt default in more than a century. Even when the Soviet Union collapsed, Russia assumed its foreign debt.

In 1918 Bolshevik revolutionaries under Vladimir Lenin repudiated Tsarist debt, shocking global debt markets because Russia then had one of the world’s biggest foreign debt piles.

With the bonds worth nothing, some holders of the Tsarist notes used them as wallpaper. The Soviet Union under Josef Stalin stopped servicing loans to the United States and Sweden after World War Two.

While Russia has only $40 billion in international bonds outstanding across 15 dollar or euro-denominated issues, its corporates have built up vastly more foreign debt.

The eurobonds have been issued with a mix of terms and indentures.

Notably, bonds sold after Russia was sanctioned over its 2014 annexation of Crimea contain a provision for alternative currency payments in dollars, euros, British pounds or Swiss francs, with the rouble listed as an alternative currency option for bonds issued since 2018.

On March 16 Russia is due to pay $107 million in coupons across two bonds, though it has a 30-day grace period to make the payments. The next full ‘principal’ repayment is a $359 million 2030 bond on March 31 and then a larger $2 billion maturity on April 4.

Russian gas giant Gazprom (MCX:) has a $1.3 billion dollar bond due for repayment on March 7.

According to JPMorgan (NYSE:), the OFZ bond market totalled 15.5 trillion roubles, or about $200 billion at January rouble rates, with foreigners holding a little less than a fifth of the bonds.

Earlier on Sunday, Moody’s (NYSE:) cut Russia’s credit rating to Ca, the second-lowest rung of its ratings ladder, citing central bank capital controls that are likely to restrict payments on the country’s foreign debt and lead to default.

Moody’s said its decision was driven by “severe concerns over Russia’s willingness and ability to pay its debt obligations”.

The ratings agency said default risks had increased and that foreign bondholders are likely to recoup only part of their investment.

Moody’s and its peers Fitch and S&P Global (NYSE:) had scored Russia at investment-grade levels of Baa3/BBB as recently as March 1. All three have since cut their ratings by several notches, sending Russia’s sovereign debt deep into so-called “junk” territory.

Facebook
Twitter
Pinterest
WhatsApp
Previous articleInstitutions increase exposure to Grayscale Bitcoin Trust as GBTC discount nears 30% By Cointelegraph
Next articleWhat is Solana, and how does it work?