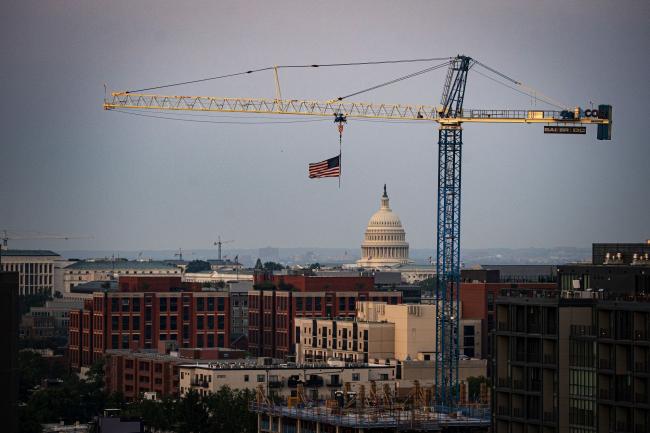 © Bloomberg. A construction crane in front of the U.S. Capitol in Washington, D.C., U.S., on Monday, Aug. 2, 2021. The U.S. Senate is heading toward passage this week of a $550 billion infrastructure bill that would provide the biggest infusion of federal spending on public works in decades and mark a major milestone for President Joe Biden’s economic agenda. Photographer: Al Drago/Bloomberg

(Bloomberg) — The bipartisan infrastructure bill would end a tax break Congress crafted to help businesses struggling during the pandemic but relatively few companies have claimed.

The employee retention tax credit, worth up to $28,000 per employee kept on the payroll in 2021, would end Sept. 30 under the legislation that the Senate is expected to pass this week. The House, however, is on recess until Sept. 20 and wouldn’t take up the bill until the fall.

The tax credit is currently slated to expire at the end of the year.

Ending it early would save money that lawmakers can use to offset some of the $550 billion in new spending for transportation and energy infrastructure in the bill. How much is still to be determined by the Joint Committee on Taxation.

The Senate’s move to abruptly end the tax cut demonstrates how lawmakers have struggled to deliver relief to business during the pandemic. It also shows how changing rules and complicated paperwork have baffled small business owners, and made it hard for them to access relief money from tax cuts and the forgivable Paycheck Protection Program loans.

The break benefits larger companies, including Spirit Airlines (NYSE:) Inc. and Best Buy Co (NYSE:). Inc., which reported tens of millions of dollars in tax credits to help keep workers on the payroll. But confusion over changing qualification rules coupled with lack of awareness about the tax cut, means many smaller companies — the ones the lawmakers said they were hoping to target — haven’t claim that tax credit, tax advisers say.

The employee retention tax credit was initially created in the March 2020 Cares Act as an alternative relief program for businesses that didn’t qualify for PPP loans, but not many companies signed up for the credit. Congress subsequently amended and expanded the tax credit twice — once in December 2020 and again March 2021 — to widen the universe of companies that could qualify for the tax cut, including business that already claimed PPP money.

When the credit was extended to the end of this year, most tax professionals thought there would be an increasingly smaller pool of businesses that would qualify as the economy recovered, he added. “It’s hard to maintain business down for that long, you’re either bouncing back or you’re not,” he said.

If the Delta variant is causing business to dip again, though, companies that haven’t qualified for the credit this spring and summer may hope to access the employee retention credit the last quarter of the year, but won’t be able to if it’s cut short, Jordan said.