Most major global indices traded in the red yesterday, as investors may have maintained the view that the Fed is very likely to start normalizing its monetary policy sooner than previously thought. In the FX world, the was the main gainer, after New Zealand’s rose above the upper end of the RBNZ’s target range, while the was the second winner in line, after BoE MPC member Michael Saunders said that it may become appropriate fairly soon to withdraw some stimulus.

The traded higher against most of the other major currencies on Thursday and during the Asian session Friday. It underperformed only versus NZD, while it was found virtually unchanged against GBP. The greenback gained the most versus , , and in that order. 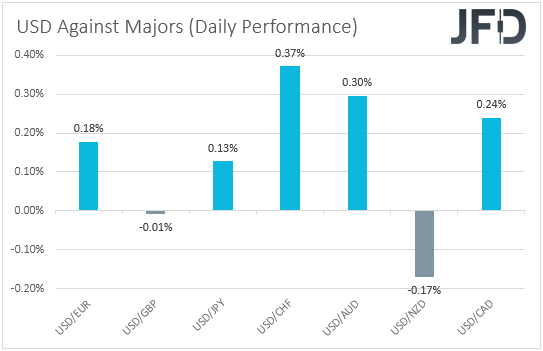 The strengthening of the US dollar and the weakening of the risk-linked Aussie and Loonie suggest that markets traded in a risk-off fashion yesterday and today in Asian. However, the strengthening of the Kiwi and the weakening of the franc point otherwise. Thus, in order to clear things up, we prefer to turn our gaze to the equity world. There, major EU indices were a sea of red, losing on average 1.16% each, with the negative sentiment rolling into the US session. Both the and slid, but the gained somewhat. During the Asian session today, appetite remained soft, with the only index recording some gains being Hong Kong’s . 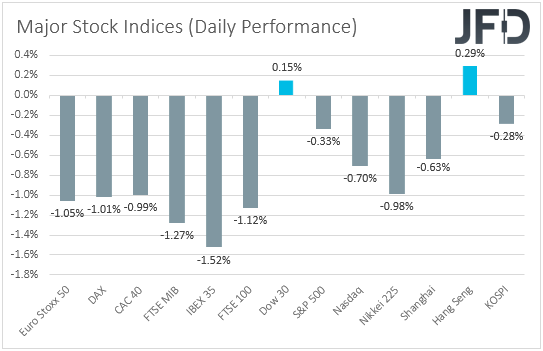 It seems that investors are sticking to their guns that the Fed is very likely to start normalizing its monetary policy sooner than previously thought, despite Fed Chair reiterating yesterday, before the Senate Banking Committee, that something like that is “still a ways off”. Indeed, according to the Fed funds futures, investors still believe that the Federal Reserve wills start lifting interest rates in February 2023. As for our view, it remains the same as yesterday. With underlying in the US surging to levels more than double than the Fed’s objective of 2%, we are reluctant to believe that the surge in consumer prices is likely to prove to be transitory. Thus, we see the case for the US dollar to continue performing well against most of the other major currencies, while equites are likely to correct a bit lower. 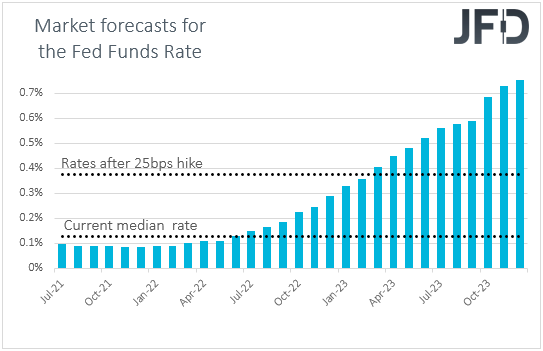 Now flying from the US to New Zealand, the Kiwi was found as the best performing major currency this morning, despite its overall relationship with risk-sentiment. It seems that the correlation has broken down due to expectations that the RBNZ may start raising interest rates faster than previously thought. At Wednesday’s , the Bank appeared more hawkish than anticipated, with officials announcing that they will end their Large-Scale Asset Purchase (LSAP) program from next week. What’s more, today, during the Asian trading, data showed that New Zealand’s inflation surged and surpassed the upper end of the RBNZ’s 1-3% target range. Specifically, the yoy CPI rate rallied to +3.3% from +1.5%. This may have encouraged market participants to bring further forward their bets with regards to when RBNZ policymakers may hit the rate-hike button. Actually, some local banks believe that this could happen even at the next gathering, in August. With that in mind, we maintain the view that the Kiwi is likely to continue performing well, especially against the . Remember that the stayed dovish last week, announcing that it will proceed with more bond purchases, beyond September. 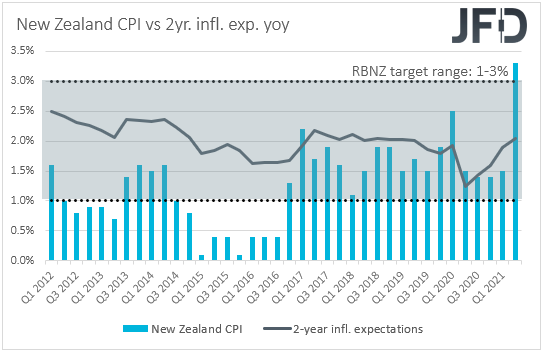 Apart from New Zealand’s CPI, we also had a BoJ monetary policy during the Asian session today, but once again, the event passed unnoticed by -traders. The Bank kept its policy settings unchanged and noted that the risks to the Japanese economic outlook remain skewed to the downside. They also added that, although inflation is seen gradually accelerating, medium- and long-term inflation expectations are moving sideways.

Now, let’s move on the UK and the British pound. The pound was the only other currency – alongside Kiwi – against which the greenback failed to eke out any gains. That may have been due to remarks by BoE MPC member Michael Saunders, who said that economic activity has recovered a bit faster than forecast in May and that it may become appropriate fairly soon to withdraw some stimulus. His comments come after both the and UK CPI rates for June rose more than expected, something that may have prompted some policymakers to change their mind with regards to the near-term future of monetary policy. More BoE officials expressing a similar view to Saunders’ could help keep the pound supported, especially against the Australian and Canadian dollars. As we already noted, the Aussie may perform poorly due to a dovish RBA, while the Loonie could also underperform, after the BoC appeared less hawkish than anticipated.

tumbled again yesterday, after the New Zealand CPI surged by more than anticipated. However, the fall was stopped by the 1.0577 level. Overall, the pair remains well below the tentative downside resistance line drawn from the high of June 18, which combined with the fact that the overnight slide confirmed a forthcoming lower low, keeps the short-term outlook negative.

If the bears are willing to stay behind the steering wheel, we could soon see them overcoming the 1.0577 barrier and perhaps diving towards the 1.0540 zone, which is defined as a support by the low of Feb. 3.  If the don’t stop there, the next level to consider as a support may be at 1.0515. That are stopped the rate from moving lower back on Dec. 7 and 8.

Now, in order to start examining whether the bulls have stolen the bears’ swords, we would like to see a recovery all the way to, and above, 1.0740. This could confirm the break above the downside line taken from the high of June 18, and may pave the way towards the peak of June 29, at 1.0765. Another break, above 1.0765, could carry larger bullish implications, perhaps setting the stage for the 1.0810 zone, which has been acting as a ceiling to the pair since back in the beginning of May.

traded lower yesterday, after hitting resistance at 1.7427. That said, the pullback took place after a strong leg north earlier in the day, something that kept the rate above the upside support line taken from the low of July 2. With that in mind, we would consider the short-term outlook of this exchange rate to be positive.

The current retreat may continue for a while more, but we see decent chances for the bulls to take charge from near the aforementioned upside line. If so, we could see another test near 1.7427 soon, the break of which would confirm a forthcoming higher high and perhaps target the 1.7465 territory, marked by the inside swing low of Apr. 20. If the bulls are not willing to stop there, then a break higher could see scope for extensions towards the 1.7580 obstacle, defined as a resistance by the high of Apr. 21. It also lies fractionally below the peak of Apr. 20.

On the downside, the move that may wake up the bears may be a dip below 1.7345. This would also take GBP/CAD below the short-term upside line and may allow declines towards the 1.7265 zone, near Tuesday’s and Wednesday’s lows, or the 1.7240 barrier, marked by the low of last Friday. In case the tumble does not stop there, a break lower may extend it towards the low of July 7, at 1.7147.

During the European session, Eurozone’s final s for June are released, but, as it is always the case, they are expected to confirm their preliminary estimates.

We have the US for June, which are expected to have declined again, but at a slower pace than in May, as well as the preliminary index for July, which is forecast to have risen to 86.5 from 85.5. Despite expectations over another pullback in retail sales, the fact that this may be slower than previously, combined with an improvement in the UoM index, may allow market participants to keep their bets over a hike in February 2023 well on the table. Will Fed Give U.S. Dollar The Green Light?