Singaporeans snap up properties during worst ever recession By Reuters 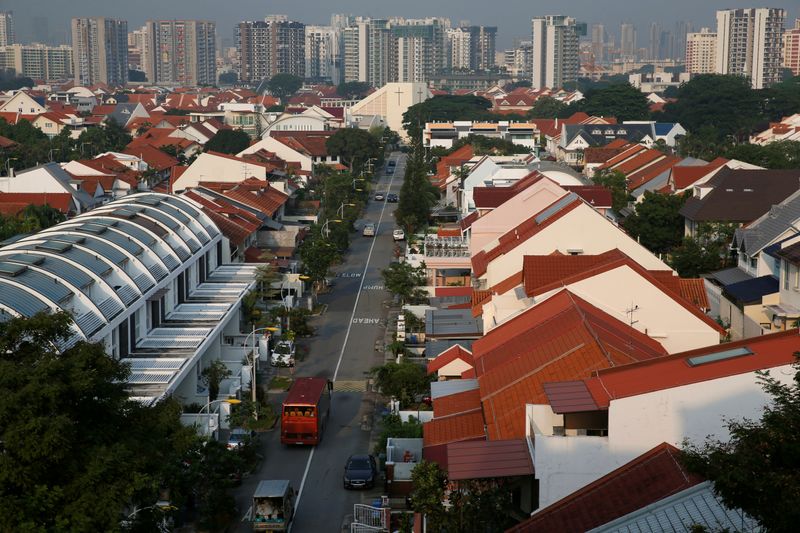 By Aradhana Aravindan and Chen Lin

SINGAPORE (Reuters) – Singaporean Jason Chen recently bought a S$1.7 million ($1.26 million) three-bedroom apartment in a swanky condominium, upgrading his home in the middle of the COVID-19 pandemic which has triggered the country’s worst ever recession.

“I know the price will rise”, said the 32-year-old, who has spent nearly a decade working in real estate.

Undeterred by the economic slump and rising unemployment, Chen is among thousands of locals snapping up property in Singapore and taking a share of the market not seen in a decade as travel curbs thwart foreign investors.

This broad-based buying spree, which has pushed prices and sales to multi-year highs, has some parallels with a housing market boom seen in late 2009 as Singapore emerged from the global financial crisis. That forced the government to initiate several rounds of cooling measures to cap surging prices.

Analysts largely don’t expect a repeat this time around as those curbs mostly remain in place. But policymakers last week cautioned buyers against the lure of cheap mortgages given the scale of job losses in the wealthy business hub, which have already seen many foreigners leave and the population shrink.

“Given the labour market uncertainties in the current economic situation, prospective buyers should remain prudent in their property purchase,” the ministry of national development said last week in a written response to a question made in parliament about the risk of a “bubble”.

The government is expecting the Singapore economy to shrink 5-7% this year, eclipsing a record 2.2% contraction in 1998 and marking the deepest recession since independence in 1965.

Property prices in the city-state rose 0.8% in the third quarter to their highest level since 2013, while sales volumes jumped to a two-year peak, the latest data showed.

Singaporeans bought nearly 81% of all private apartments sold in the third quarter, the highest proportion since early 2009, according to an analysis by property agency OrangeTee and Tie.

Some buyers like Jenny Lin, a 26-year-old accountant, have viewed the pandemic as an opportunity to get on the ladder of the world’s third most expensive housing market after Hong Kong and Munich, according to property consultant CBRE.

“When COVID-19 first started you could really get a good bargain on the property price, as many people were rushing to sell their properties away for quick cash to salvage their main business,” said Lin, who expedited her purchase of a S$530,000 one-bedroom apartment in May.

Despite the turmoil of 2020, prices of private homes in Singapore fell only in the first quarter and have risen since.

By comparison, prices dropped for four consecutive quarters between the middle of 2008 and 2009, during the global financial crisis.

The overall price rise in 2020 has been modest at just 0.1%. But for buyers like 36-year-old asset manager Amy Zhang, who recently purchased a S$1.17 million investment property, Singapore real estate is a safe bet compared to volatile stock markets which she has invested in for years.

The tightly controlled market, long viewed as a safe-haven, does pose some risks.

Droves of expatriates, who tend to rent, are leaving the island-state due to retrenchments and tighter foreign labour curbs, driving the first decline in Singapore’s population since 2003 and pushing rents lower.

But Zhang, like many others in a country where the land available to developers is tightly controlled to manage prices, bought off plan and is betting on a stronger rental market when her property is ready in two to three years.

Singapore property has long attracted the super-rich from its less developed Southeast Asian neighbours as well as multi-millionaires from China. https://reut.rs/2GRIihC

Political uncertainty in rival Hong Kong has also helped to galvanise that appeal, analysts say, even if some foreign purchases have been put on hold due to COVID-19 travel restrictions.

“Once all travel restrictions are lifted, there will be an inflow of foreign investments into the property market,” said Chen.