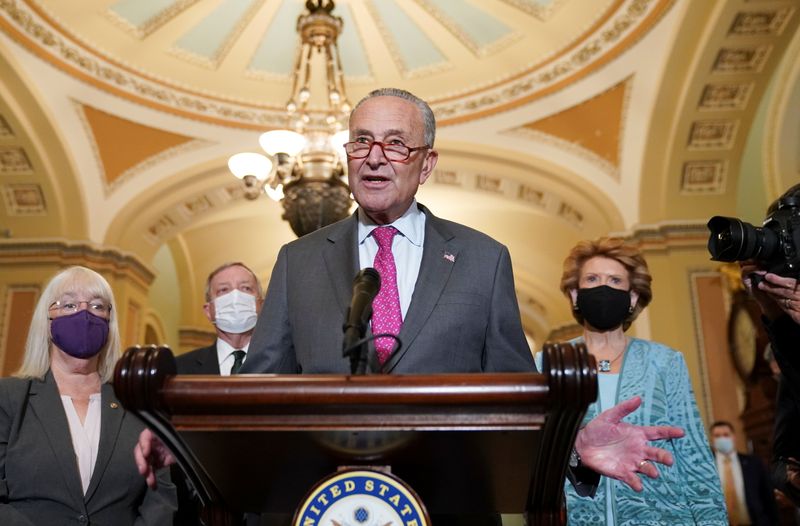 By Makini Brice and David Morgan

WASHINGTON (Reuters) -The U.S. Senate made gradual progress on Tuesday on a $1 trillion infrastructure investment bill to upgrade roads, bridges, mass transit and broadband services as the Democratic and Republican leaders squabbled over debate on amendments.

The legislation https://www.reuters.com/world/us/whats-us-senates-bipartisan-1-trillion-infrastructure-bill-2021-08-02, which is backed by President Joe Biden, marked a rare bipartisan effort in a Senate that is split 50-50 between the two parties.

Two days into the debate, Senate Majority Leader Chuck Schumer and Republican Leader Mitch McConnell clashed over the pace of progress on the bill, which appeared headed toward passage but which is still is open to amendments.

McConnell warned Schumer that Republicans would try to block any effort to cut off debate early, however, and said: “My best advice to the majority leader would be slow but steady wins the race.”

During long negotiations over the past few months, Republicans have insisted that any new funding in the legislation be paid for with money from existing accounts.

Democratic Senator Krysten Sinema and Republican Senator Rob Portman released a summary stating that $210 billion would be taken from unused COVID-19 aid programs. Some public health officials have expressed concerns over doing this at a time when the “Delta variant” of the virus is surging.

Other sources include $51 billion by delaying a Medicare prescription drug regulation and $53 billion from some states returning unused unemployment insurance benefits.

Sinema and Portman said that an analysis by the non-partisan Congressional Budget Office found that the infrastructure investments would produce $56 billion in economic growth over the long term, which would be another source of financing.

As of Tuesday afternoon, three minor amendments had been approved and three rejected. It was not known how many more amendments would be proposed. The number could determine whether the Senate moves to a vote on passage sometime Thursday or possibly over the weekend.

Either way, senators were unlikely to be able to start their summer recess next week as scheduled given that Schumer has vowed to debate a budget resolution laying out plans for a $3.5 trillion “human infrastructure” bill immediately after passage of the $1 trillion bill.

That larger effort is not expected to win support from Republicans, many of whom oppose its major initiatives, including money to address climate change, funding to expand home healthcare for the elderly and protections for some illegal immigrants.

Republican Senator Mike Rounds told reporters that one of the challenges for the $1 trillion bipartisan bill was “poison pill” amendments that, if approved, could potentially unravel the delicately-negotiated measure.

Highlights of the legislation include $550 billion in new spending over five years for items such as roads, rail, electric vehicle charging stations and replacing lead water pipes on top of $450 billion in previously approved funds.

The legislation would be the largest U.S. infrastructure investment in decades. If passed by the Senate, the House of Representatives would not debate it until sometime this autumn.

The conservative group Heritage Action for America on Tuesday urged senators to vote against the legislation, saying it “recklessly spends $1 trillion.”