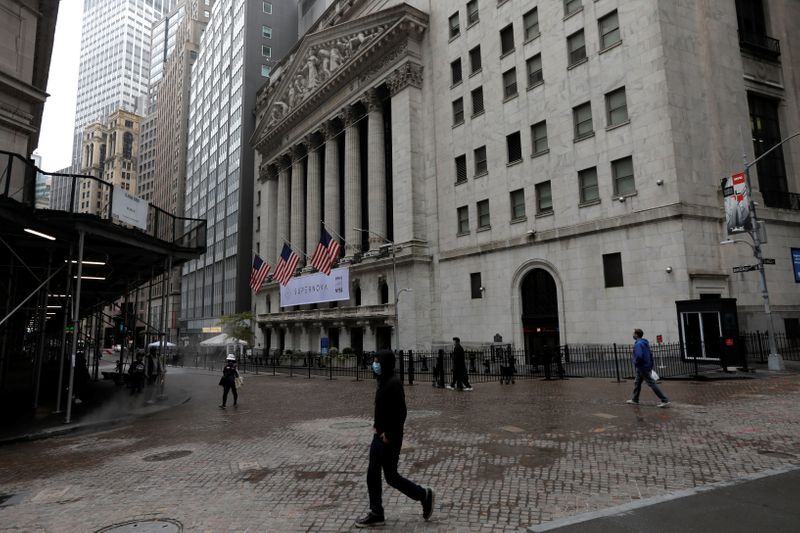 NEW YORK (Reuters) – U.S. small caps joined in the broad market rally in the days after Election Day as investors priced in the likelihood of a divided Washington with Democrat Joe Biden president and Republicans maintaining their Senate majority.

Yet some investors and analysts warned that smaller companies may lose steam as the coronavirus pandemic shows no signs of slowing down. Chief among their concerns: that small-caps will bear the brunt of aggressive measures Biden could adopt to combat the pandemic, without benefiting from a large stimulus bill if Senate Republicans block his efforts there.

Democrats could still take over the Senate if Georgia’s two contested seats go to a January runoff as is now expected. That might lead some investors to price back in the possibility of spending bills that would benefit small-caps.

However, smaller companies remain likely to bear the brunt of the pandemic, which is reaching record levels in the United States.

“A more aggressive response from a President Biden could be a risk for small caps,” said Sylvia Jablonski, managing director at Direxion.

“The best scenario for small caps is a full reopening of the economy with manageable levels of Covid before a vaccine comes out and some form of stimulus with a supportive Fed. The worst case is a lot less stimulus than we hoped for with a full shutdown or something close to it,” she said.

Those worries are reflected in small-caps underperformance since Election Day. The index of small cap stocks is up 2.6% since Nov. 3, a little more than half of the 4.2% gain in the large cap S&P 500 index over the same time. The underperformance mirrors that of the last five years, in which the Russell is up 38.2% compared with a 67% jump in the S&P 500.

U.S. coronavirus cases surged by more than 120,000 on Thursday, according to a Reuters tally, the second consecutive record daily increase as the virus spreads throughout every region of the country. Twenty of the 50 states reported record increases Thursday.

Spiking case counts in Europe have led to reinstatement of economic lockdowns and other restrictions there. France, Germany, Italy, and the Netherlands have announced new curbs, while U.K. lawmakers voted for a month-long lockdown.

“The implications of the ongoing second COVID-19 wave in Europe and the third wave in the U.S. remains uncertain and the results of the vaccine trials by the end of this month remain an important catalyst,” analysts at Barclays (LON:) wrote in a note Thursday, recommending that investors remain hedged against a steep decline in U.S. small-caps.

Small caps may remain volatile in the week ahead as Congress resumes negotiations on a stimulus bill. Senate Majority Leader Mitch McConnell has balked at passing a $2.2 trillion bill supported by House Democrats, but said Nov. 4 that he was open to some support for state and local governments supported by Democrats and that there was a “need to do it by the end of the year.”

Progression in stimulus talks and the number of coronavirus case counts will likely dictate the path of small cap stocks in the weeks ahead because Biden would not take office for another two months, said Esty Dwek, head of global market strategy at Natixis Investment Managers.

Biden is not going to want to “spend political capital trying to lock down the country or try to get people to follow a national mask mandate which would be extremely difficult to implement,” she said, making the risk of broad economic lockdowns “minimal”.

Small-caps may begin to outperform again in 2021 as new case counts decline and vaccines and other treatments become available, she said.

“We’re going to start to think about this reopening trade again and start to move past the virus,” she said.