We started the week with risk-off sentiment and choppy markets. The choppiness could remain until the payrolls number comes out on Friday. But the mood seems to have shifted back toward risk, for now.

Wednesday has started out pretty-much flat to slightly higher after stock indices were able to hold on to their gains and then some Tuesday. Stocks returned to their long-term trend of floating higher amid another quarter of solid earnings reports, with pauses for concerns about the Delta variant and rate of economic growth.

The broader indices closed on a positive note Tuesday with the up 0.8% and hitting a new all-time record close of 4,423.15. The was also up 0.8% while the rose 0.55%. It’s almost as if investors shrugged off two main concerns—Delta variant and slowing economic growth.

The Cboe Volatility Index () fell to 18 yesterday and is a little higher in early trading. We’ll see if it comes back today. Although bonds were relatively flat, they still ended up slightly higher yesterday with the yield on the up to 1.174% after settling Monday at 1.173%, its lowest closing level since February. They look to be trading a little lower this morning, which could take it to six-month lows.

On Wednesday, the markets may show interest in the two purchasing-managers surveys on U.S. services-sector activity in July. The IHS Markit’s final PMI will be and the ISM non-manufacturing index.

Before the bell, General Motors (NYSE:) reported earnings that missed quarterly analysts’ estimates, dragged down by warranty recall costs. The car company raised its full-year earnings guidance despite the well-publicized shortage of semiconductor chips needed for electronic car operations that has plagued the auto industry and caused plant shutdowns.

The COVID numbers have been rising across the board, and companies—as well as policy-makers—seem to be responding. On Tuesday, New York City Mayor Bill de Blasio said proof of COVID vaccinations will be required for both staff and customers to enter restaurants, performances, gyms, and other establishments beginning Sept. 13.

The requirement is expected to impact everything from airlines and restaurants to ride-sharing and concerts, with people who don’t have a medical or religious reason for not getting vaccinated effectively being barred from entering buildings and spending money. The concern is that such measures could contribute to the economic recovery that’s already started to stall in place around the globe.

But that doesn’t seem to stop shoppers, who are apparently determined to look good when they venture out of the house. Ralph Lauren (NYSE:) was up 6% on solid quarterly earnings and a fashionable outlook for 25% revenue growth over the next year. Also, ath-leisure brand Under Armour (NYSE:) (NYSE:) reported earnings that beat estimates and swung to a profit. Notably, its revenue gains came from its brick-and-mortar stores. The stock closed up 7.5%.

Earnings And Other Company News

After the bell, ride-sharing company Lyft (NASDAQ:) reported that exceeded estimates, reportedly on improving mobility trends as vaccinations picked up in the spring. Shares rose more than 3% in late trading. Might we see a similar trend when Uber (NYSE:) reports today after the close?

In China, the state media continued its crackdown on internet companies, this time placing online gaming in regulators’ crosshairs. The characterization of games played online as “spiritual opium” caught some investors off guard. Shares of Tencent Holdings (OTC:) sank 7% on concerns that its popular online games could become persona non grata under a Chinese regulatory crackdown. This trickled down to gaming stocks such as Take-Two Interactive (NASDAQ:), Activision Blizzard (NASDAQ:) and Electronic Arts (NASDAQ:), all of which were trading lower.

We saw an interesting dynamic play out in the energy sector. Yesterday, we saw futures fall over 1% to $72.23 a barrel on concerns that the spread of the Delta variant will put a crimp in demand, energy stocks were up. Crude appears to be trending lower this morning and if the decline continues, we could head for a third day of declines.

While crude prices were declining, the energy sector was a strong performer yesterday, up by 1.7%. One reason for this may have been strong earnings from BP (NYSE:) and its dividend and share buyback announcement that could have added fuel to the rally in energy stocks. 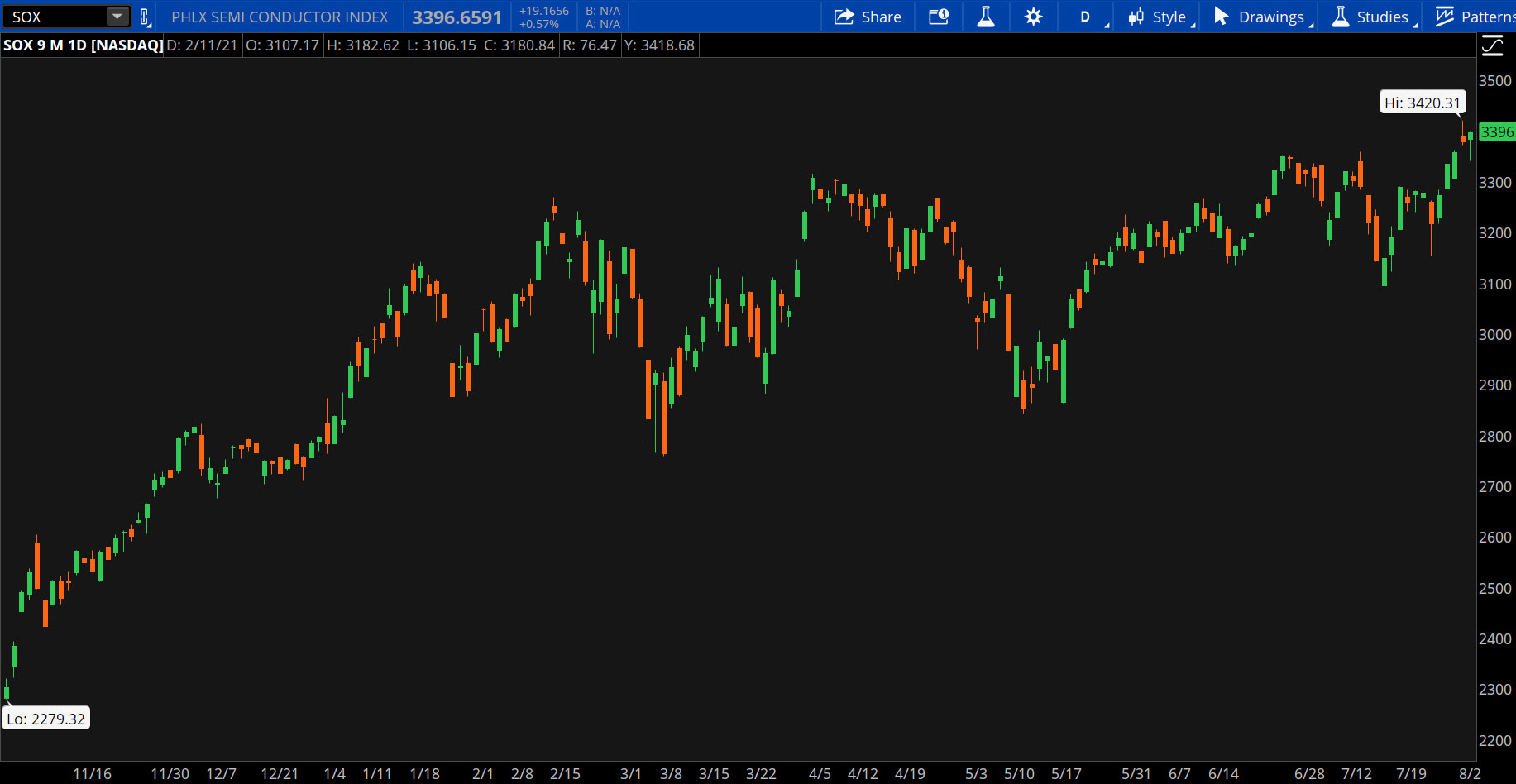 CHART OF THE DAY: CHIPPING AWAY. Semiconductors have been showing strength lately with the Philadelphia Semiconductor Index (SOX—candlestick) closing at an all-time high yesterday. Investors should keep an eye on this subsector since it’s one that’s been impacted by supply shortages, which is an ongoing concern. Data source: Nasdaq. Chart source: The thinkorswim® platform. For illustrative purposes only. Past performance does not guarantee future results.

What’s Going On With My Data Behind The Digital Curtain? With Zoom Video’s (NASDAQ:) recent $85-million settlement for alleged data sharing violations and for failing to stop “Zoombombing” hackers from crashing work and school sessions, it just comes to show that behind the digital curtain, we have no clue as to what’s going on with our private data. And looking at other larger-scale hacks that have taken place lately, it tells that, perhaps, it’s time for everyone—from households to businesses to government—to begin levelling up their game when it comes to digital data protection.

Cybersecurity is a strange beast. It just cranks up the heat non-stop, escalating with every incident. So, is it time to focus on this sub-sector with eyes focused on the long-term digital horizon? Right now, cybersecurity firms, in general, appear to be underperforming the SPX year to date. These include top US cybersecurity firms (by market cap) like Crowdstrike (NASDAQ:), Fortinet (NASDAQ:), Palo Alto Networks (NYSE:), Cloudfare (NET), and Zscaler (NASDAQ:). There are nearly two dozen publicly traded companies in the cybersecurity universe. Some will do better than others. Newcomers are likely to follow. Maybe it’s time to pay closer attention to these little-known companies. After all, they might play a critical role as the entire world appears to be digitizing itself more and more, and with increasing speed.

Squeezing In A Vacation: Given that we’re in the last full summer month, it may be worth looking at how hotels have been performing. If earnings reports from Marriott (NASDAQ:), Hilton (NYSE:) or Wyndham (NYSE:) are any indication, hotels are seeing higher occupancy rates mostly from leisure travellers vs. business travellers. Thanks to vaccine availability, people seem to be feeling more confident about traveling and staying at hotels. Last year during the pandemic, vacationers were more inclined to stay at an Airbnb (NASDAQ:) or other hotel alternatives such as RVs and camper vans. Not that those consumers are swaying away from them, but the rise in hotel occupancy shows that concerns of social distancing could be eroding. It’ll be interesting to see what MGM Resorts (NYSE:), Wynn Resorts (NASDAQ:) and Booking Holdings (NASDAQ:) have to say when they report after the close.

For hotels to operate at pre-pandemic levels, they’ll probably need to see an uptick in business travel. And that could take more time. Right now the focus is to try to get a vacation before summer ends. Of course, concerns of the Delta variant could sway things.

Feeling Dispirited About Airline Travel? Pity the hundreds of plane travellers on Spirit Airways (SAVE) who have had their flights canceled this week. At Spirit, the airline said more than half its scheduled flights were canceled Tuesday due to bad weather, staffing shortages, and system outages. It was the third consecutive day of massive flight cancelations. The timing couldn’t be more painful, as the busy summer travel season has surged to fresh pandemic highs, only to have travelers met with staff shortages both at airports and on airlines.

Hard-to-predict severe summer storms have always been a challenge for airlines and their passengers. Throw in new pandemic safety rules, travellers out of practice keeping their three-ounce bottles of liquids in a clear plastic baggie, staffing shortages resulting in long lines, and you have a formula for hot tempers to flare.

Maybe that find-your-zen staycation isn’t such a bad idea after all.