Southern Europe grapples with changing face of tourism By Reuters 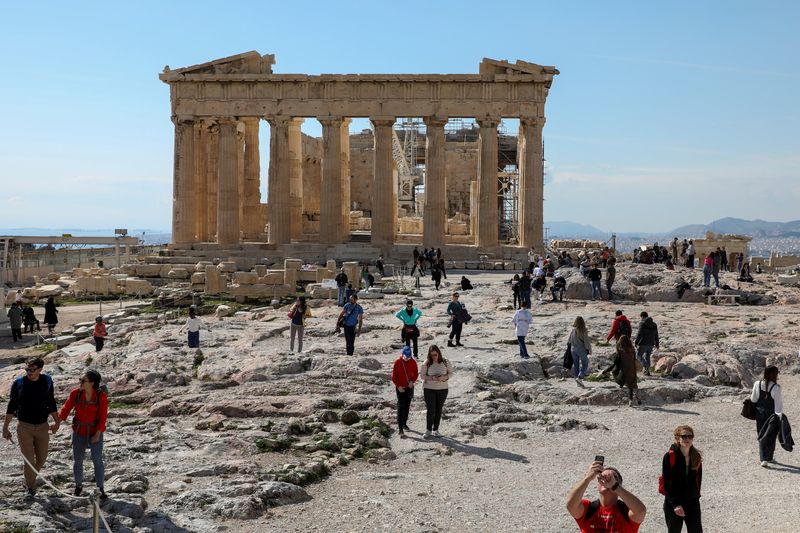 CORFU, Greece (Reuters) – It took one electricity bill to crush Dimitris Diavatis’ hopes that his Greek summer resort could bounce back to its pre-pandemic health this year, even with bookings pouring in.

The amount was more than double what he paid this time last year when the hotel was not even open. After two sluggish summers, the irony was not lost on him: “We won’t make a profit in a good year,” he said. “It’ll be eaten up by inflation.”

Greece – like the other tourism-dependent economies on the euro zone’s Mediterranean fringe – is seeing signs of a much-needed recovery in visitor numbers in 2022 after two largely lost years. As in Spain, Portugal and Italy, the sector is a huge employer and contributor to state revenues.

But across the region, the pandemic has changed the face of tourism. Hotels were already grappling with higher fuel bills and inflation which a further energy price surge in the wake of Russia’s invasion of Ukraine will only make worse.

The dislocation of labour markets caused by COVID-19 has left entrenched staffing shortages, while Italian tourist officials concede that pandemic-era holidaying – with its emphasis on hygiene, cleanliness and space – is a big challenge for its ageing infrastructure.

Meanwhile, a market for more modest, small-scale vacations is opening up: In Spain and Portugal, a reluctance among many tourists to travel far is accentuating the trend for stays in rural areas in tents, campers or motorhomes.Industry and government officials in Greece are forecasting revenues will reach 80-90% of the record seen in 2019, when 33 million tourists brought in 18 billion euros in revenues, worth a fifth of national output.

Yet a bumper season is unlikely to offer much relief to struggling businesses which emerged from a decade-long financial crisis in 2018 only to have the pandemic bring global travel to a halt two years later.

So acute is the problem of soaring , gas and electricity prices that the president of the Greek tourism confederation SETE, Yiannis Retsos, wrote to ministers in January urging them to provide financial support, saying it was “objectively impossible” for year-round hotels to the cover their costs, especially after the quieter winter months.

The highly indebted countries of Europe’s south were also bracing for the European Central Bank to remove the stimulus that has kept their borrowing costs down.

Although the Ukraine war has left the interest rate outlook uncertain, the southern fringe still badly needs its tourism sectors to get back to work given the economic hit the conflict is set to deliver.

Speaking a day after the invasion, which Russia calls a “special operation”, Greece’s Retsos said it was too early to gauge its impact on the tourism sector.

More than a week into the conflict, there has been no noticeable increase in cancellations across the region.

Russian tourists only make up a very small proportion of the sector in southern Europe – 2% of revenues in Greece in 2019 and around 1% of nightly hotel bookings in Portugal. Turkey – outside the European Union – is a more popular destination.

But with European gas prices already at record highs, and this likely to feed into inflation globally, the concern in countries like Greece is the conflict will only worsen an already bleak outlook, further crimping guests’ spending power and increasing providers’ costs.

NO END TO COSTS

Even hotels that were shut during winter worry they will not be able to shoulder the extra burden, having already agreed prices with tour operators last summer, said Babbis Voulgaris, head of the Corfu hoteliers’ association.

Resort owner Diavatis, who also owns a year-round boutique hotel and a waterpark complex on the island, agreed.

“This will be a real crisis for us,” he said. “I won’t say it’s worse than the pandemic because at least we’re open. But we didn’t lose money then. Now we’re heading towards losing money.”

The Greek government has spent over 42 billion euros in pandemic support measures since 2020 to keep businesses and households afloat and about 2 billion euros since September to subsidise power bills through March. For hoteliers, the support does not go far enough.

“In the summer, with the air-conditioners working, the refrigerators, the kitchen, everything – I don’t how when this will end,” said Costas Merianos, who owns a small family-run hotel on Corfu’s Ionian coast.

Across the sea in Italy, lockdowns and energy prices have forced many hotels to shut for good, said Marina Lalli, president of the Federturismo industry association.

And while Lalli was hopeful tourism could inch closer to 2019 levels this year, Italy faces the additional problem of being “a mature tourist destination with mature hotel structures that need to be renewed,” she said.

“In the post-COVID era, tourists are even more attentive to quality, they want a guarantee of cleanliness and want to feel safe.”

Greece said it was opening its tourism season as early as March 1 this year to meet demand but, like in Italy, Spain and Portugal, the season will not begin in earnest until the Easter break in April, a litmus test before the vital summer months.

Both Greece and Italy are racing to fill job shortages as the pandemic forced workers abroad for better paying jobs or into different sectors with less uncertain prospects.

In Greece, the tourism minister even appealed to refugees fleeing Ukraine, offering them residence and work permits to fill 50,000 job gaps in hospitality.

Demand for Spanish holidays was looking very strong this year, according to the vice-president of industry association Exceltur, Jose Luis Zoreda, thanks to Spain’s high vaccination rates and the easing of pandemic restrictions in its big markets, the UK and Germany.

“There is a strong, accumulated travel appetite in Europe,” Zoreda said, forecasting an “explosion” of tourism from Easter onwards, but also lower profit margins due to inflation and energy prices.

Exceltur, however, also found tourists were seeking a different experience. In 2021, campsite rentals were up 19.2%, flat rentals were up by 16%, rural homes by 11%. Hotel usage fell by 8%, a decline also driven by fewer business trips.

In January, new motorhomes and camper vans sales were up 34.1% on an annual basis, according to the Spanish Association of the Caravanning Industry and Trade (ASEICAR).

“The ‘all-in-one’ holiday model has been left behind,” Yescapa, an online motorhomes and camper vans rental company, told Reuters.

Nico Aro, who rents out a camper van on the island of Tenerife, says he has not been able to enjoy it himself since he bought it last March because requests keep coming in from Italy, France and Belgium. His biggest problem is that he cannot find another one to buy because they are in great demand.

“I have benefited from the pandemic,” he said.

The appetite for “slower” tourism has also grown in Portugal, where the sector played a crucial role in its recovery from the 2010 debt crisis. Tourism stood at about 15% of GDP in 2019 but fell to 8% in 2020.

“There’s an increasing number of people looking for places with fewer people,” said Helder Martins, president of Algarve’s main hotel association. “I don’t believe that they will return to just wanting the sun and the beach.”

The centuries-old “schist villages”, built from the stone of a mountainous region clad in pine trees, are roaring back to life after being abandoned over the years by young Portuguese seeking work elsewhere.

“This summer is filling up fast,” said Sonia Cortes, who owns a small five-room hotel in the Janeiro de Cima schist village, where construction workers are rebuilding traditional houses.

“The beginning of the pandemic was really difficult for those who lived off tourism,” she said. “(But then) those in bigger cities looked for villages like this one where they could feel safe.”

There was a 30% increase in the number of night stays at schist villages from 2019 to 2020-21, said Bruno Ramos, who works for an agency promoting tourism there.

Still, back in Greece, Merianos, the Corfu hotel owner, has a more sober view of the months ahead.