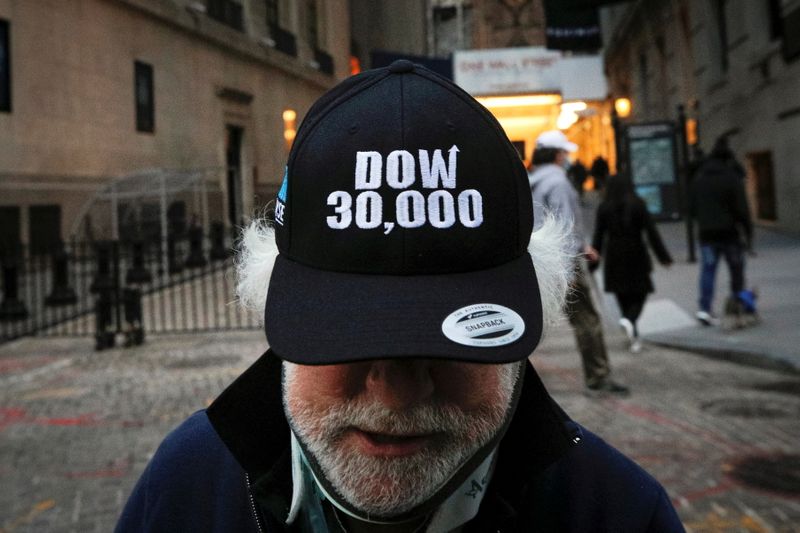 The index and the retreated from record closing highs, pulled lower by cyclicals and small caps that drove the rally earlier in the week.

“It’s a growth day, flipping back the other way away from value,” said Tim Ghriskey, chief investment strategist at Inverness Counsel in New York. “It’s this ongoing struggle between the virus and the vaccine.”

“There’s a reality setting in that while the vaccine will start being distributed fairly quickly, the virus isn’t go away quickly and therefore the timeline for economic improvement is getting pushed out.”

A wide range of data released in advance of Thursday’s Thanksgiving holiday was dominated by a second consecutive week of unexpected jobless claims increases, suggesting that new restrictions to combat spiking coronavirus cases could hobble the struggling labor market’s recovery.

“The economic data is not good, and we know it won’t be good for some time given this new wave of the virus,” Ghriskey added.

The market appeared to be replaying the previous two weeks, which began with rallies driven by promising vaccine news but pivoted back to stay-at-home plays on near-term pandemic realities and lack of new fiscal stimulus.

Still, the vaccine developments and removal of uncertainties surrounding the U.S. presidential election have driven Wall Street indexes to record closing highs, and put the S&P 500 on course for its best November ever.

Market participants believe U.S. stocks have more room to climb. A recent Reuters poll showed analysts believe the S&P 500 will gain 9% between now and the end of 2021. The index has surged about 66% since the coronavirus-led crash in March and is up about 12% so far this year.

Of the 11 major sectors of the S&P 500 seven ended the session in the red, with energy suffering the largest percentage loss.

Tesla (NASDAQ:) Inc, which surpassed $500 billion in market capitalization on Tuesday, extended its gain by 3.4% even after the electric-car maker recalled about 9,500 vehicles.

The company also plans to start manufacturing electric vehicle chargers in China starting next year, according to documents it submitted to Shanghai authorities.

Declining issues outnumbered advancers on the NYSE by a 1.24-to-1 ratio; on Nasdaq, a 1.01-to-1 ratio favored decliners.

Volume on U.S. exchanges was 10.76 billion shares, compared with the 11.17 billion average over the last 20 trading days.