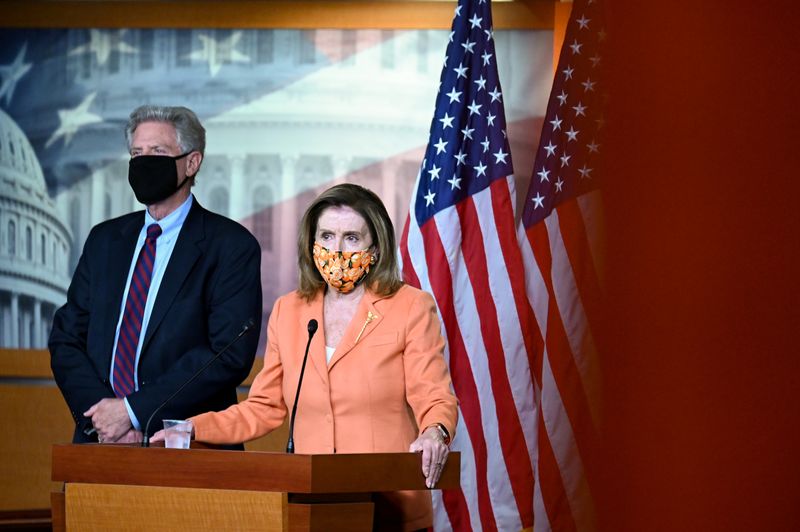 (Reuters) – Wall Street’s main indexes opened higher on Friday, setting up the S&P 500 and the Dow for their second straight weekly gain on hopes of more federal fiscal aid and growing expectations of a Democratic victory in next month’s presidential election.

Eight of the 11 major S&P indexes were up in early trading, led by materials and information technology. Energy stocks dipped, but were still set for their biggest weekly percentage increase since June.

The S&P airlines subindex edged up 0.1% as U.S. President Donald Trump called for a “skinny” relief bill that would include elements such as direct payments and a bailout to the struggling airline sector.

“The market is continuing to rise on hopes of some sort of a conclusion (on stimulus), not only to the airlines, but to the rest of the country,” said Peter Cardillo, chief market economist at Spartan Capital Securities in New York.

Recent trading on Wall Street has been dictated by negotiations in Washington on more fiscal stimulus as signs of a slowdown in the domestic economic recovery sparked calls for more aid for businesses and households.

Investors have also begun to digest the possibility of Biden winning the Nov. 3 election after a fractious debate last month led to a jump in his lead over Trump in several national polls.

“Some of the market sectors that would be thought of as performing better under a Biden administration have started pricing in a higher probability of a Biden victory,” said Dan Eye, head of asset allocation and equity at Fort Pitt Capital Group in Harrisburg, Pennsylvania.

The S&P small- and mid-cap indexes are on course to end the week with gains of about 6% and 5%, respectively, outpacing a rise of about 3.5% in the benchmark S&P 500.

They are also on track to outperform the tech-heavy Nasdaq, which has surged since a coronavirus-driven crash in March, thanks to a narrow rally in stocks of mega-cap technology companies such as Apple Inc (NASDAQ:) and Amazon.com Inc (NASDAQ:).

In company news, Xilinx Inc (NASDAQ:) surged 12.5% after a report said Advanced Micro Devices (NASDAQ:) Inc was in talks to buy the chipmaker in a deal valued at more than $30 billion. Shares of AMD fell 1.7%.

General Electric (NYSE:) Co jumped 3.1% as a report said Goldman Sachs (NYSE:) reinstated coverage on the U.S. industrial conglomerate with a “buy” rating, saying the company will emerge stronger from the COVID-19 pandemic.

Advancing issues outnumbered decliners more than 2-to-1 on the NYSE and on the Nasdaq.