Over a week ago, the was about to invalidate an impulse . By now it has invalidate it, and the index is now in what is called, in Elliott Wave Principle (EWP) terms, a diagonal pattern lower. When the market topped at SPX 3550 nobody knew, or could know, this diagonal would emerge. But, it did, and with that information at hand we now know:

So, if you feel as though you are being whipsawed, you are no alone. It will likely continue for a few more days. All these three-wave patterns do not make for nice trending moves. And, because the waves come in threes, it allows for several interpretations as to how the waves can resolve when target zones are reached. Please bear with me (pun intended) until this diagonal completes. 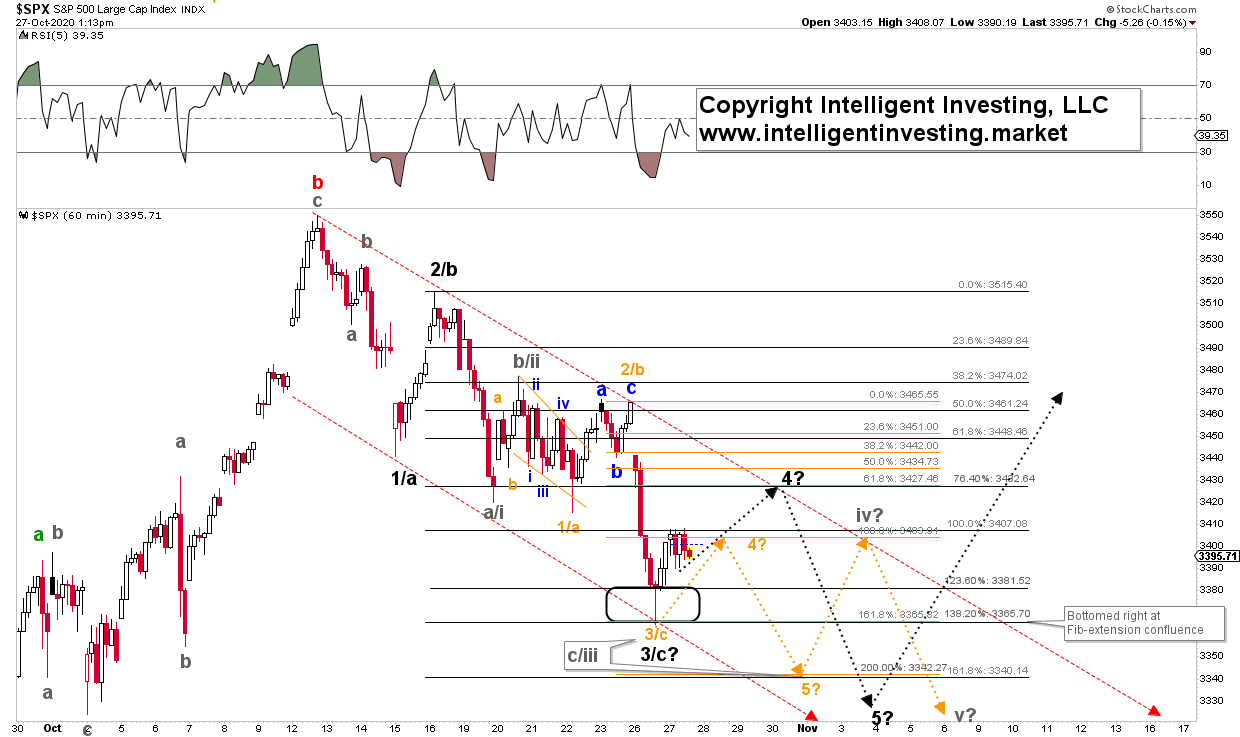 As the S&P 500 topped right in the target zone for a possible wave-4 last Friday, it then failed to move above SPX 3467 yesterday, and broke below SPX 3440 instead. Then, on Thursday, forecasted SPX 3380s were then quickly reached (grey arrow on hourly SPX chart in Thursday’s update) as the index bottomed yesterday at SPX 3365 and closed at SPX 3400. So far, so good.

The question now remains: Will the index take the orange or black path? My preference is for the black path, but since Friday’s high was, most likely, not even a wave-4, there’s your healthy dose of “making for low confidence forecasts … it allows for several interpretations forecasting the next move” and we have to remain open-minded.

Thus, while the short-term continues to be muddled in some uncertainty, albeit it is clearing up because we now know we are dealing with a diagonal, my primary expectation remains that we will likely see a move down into the SPX 3200-3100 region first before rallying to new all-time highs to complete the bull that started in 2009 and going all the way back to after the 1929 crash. See my past .

Due to this diagonal pattern, there is nothing in the charts yet to suggest the rally to SPX 4000-4200 has already started. Besides, the Elliott Wave Principle is the only method of analysis that also provides guidelines for forecasting. So while it does not have – and no method has – all the answers before hand – and, thus, neither do I – it can clearly help us in identifying turning points. Use those for our trading decisions as sell-points, and what to expect most likely next.