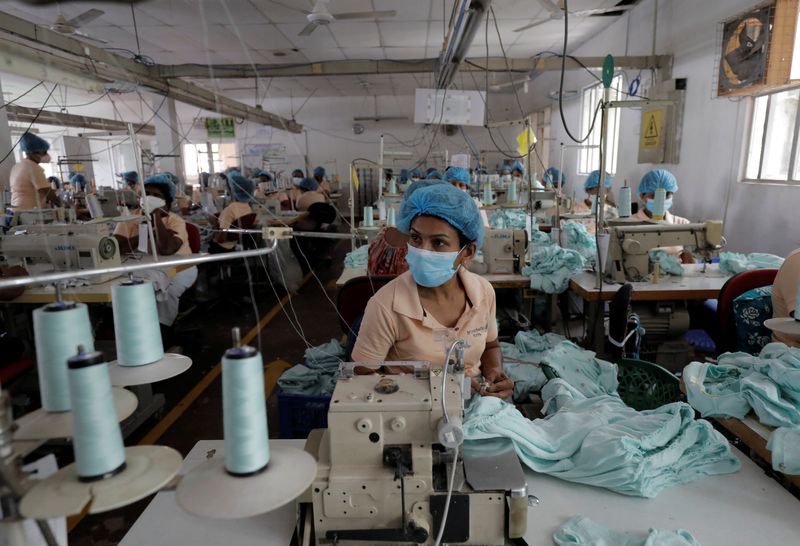 © Reuters. Employees at the Broadway Kids (Pvt) Ltd apparel factory, wait for the generator to be turned on during a seven hour power outage at the factory in a suburb of Colombo, Sri Lanka March 3, 2022. REUTERS/Dinuka Liyanawatte

COLOMBO (Reuters) – Indika Prasanna Kumara ventures out every afternoon to try to find 200 litres of diesel for the Broadway Kids apparel factory in Sri Lanka so it can run its generators during power cuts and keep working.

“We have to scout for different fuel stations because of the shortages, then wait in line for eight hours or longer,” Kumara said as he and two colleagues from the fuel-finding team poured their latest haul into a generator at the factory, which employs 275 workers in the commercial capital of Colombo.

“Once we get the fuel we have to guard the cans because they might be stolen. That is how desperate people are for fuel.”

Sri Lanka is facing its worst financial crisis in a decade with foreign exchange reserves shrinking 70% to $2.36 billion in January.

The dollar shortage has left the island struggling to pay for imports including food, medicine and fuel.

Hit by the regular power outages, Broadway Kids, which produces clothes for British brands including Next, Matalan, Frugi and John Lewis & Partners, is among dozens of apparel factories struggling to meet production targets.

“We operate on very thin margins,” said Broadway Kids’ owner Chula Dharmadasa. “I’m already getting warnings from clients that if we miss delivery targets we have to air freight goods, which we cannot afford to do.”

“Our orders will get cancelled and buyers will move to competitors like Bangladesh,” he said, adding that order losses of one company can impact the entire value chain and potentially lead to job losses.

Garments are Sri Lanka’s second largest foreign exchange earner and the sector was just seeing a pandemic recovery with export earnings increasing by 22.1% to $514 million this January, compared with January 2021.

Overall, the sector has about 300 factories that generated revenues of $5.4 billion in 2021.

“The situation is now critical as plants are coming to a halt due to lack of diesel for generators, staff transport and goods transport,” said Yohan Lawrence, secretary general of the Joint Apparel Associations Forum, which represents the largest apparel companies in Sri Lanka.

The government has given assurances that help is on the way.

Uninterrupted power supply will be restored after March 5, the office of President Gotabaya Rajapaksa said in a statement on Wednesday, but did not provide a plan for how dependable fuel supplies would be secured.

On Thursday, Rajapaksa appointed new ministers for energy and power in a snap cabinet reshuffle.

The power situation and fuel shortage has forced Broadway Kids to spend 400% more on fuel and generator costs, compared with the same period last year, which has pushed up overheads.

The fuel shortage has also forced the company to suspend free transport to workers. Since many private busses are stuck in fuel queues for hours, some workers opt to walk to work, starting out as early as 6 a.m.