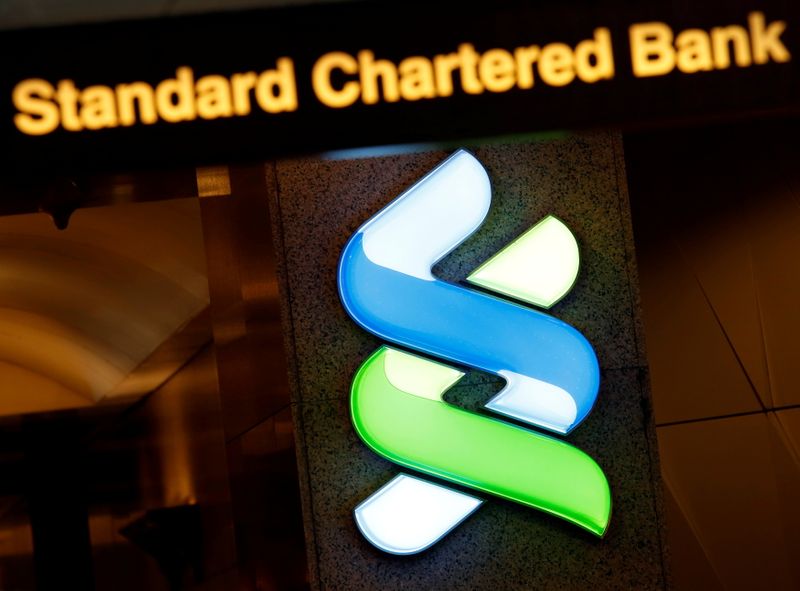 © Reuters. FILE PHOTO: A logo of Standard Chartered is displayed at its main branch in Hong Kong

By Sumeet Chatterjee and Lawrence White

HONG KONG/LONDON (Reuters) – Standard Chartered (L:) posted a smaller-than-expected 40% slide in third-quarter profit as it lowered its loan loss expectations linked to the coronavirus pandemic, adding that it believes client demand will increase next year.

Underscoring its improved earnings outlook, StanChart also said it may resume dividend payments when it releases full-year results in February.

Credit impairment charges came in at $358 million for the three months ended Sept. 30, up 27% from the same period last year, but well below the preceding quarter’s $611 million and a consensus estimate of $614 million.

StanChart said the results reinforced its view that credit impairments would be lower in the second half of the year than the first, as lenders worldwide report loan losses stabilising.

The key question now facing analysts and investors is whether various government support measures such as emergency loans and furlough schemes have genuinely mitigated losses, or merely pushed them back into next year.

“Given the extreme economic pressures relating to the persistence of COVID-19, partially addressed through the efficacy of government support measures, it is not possible to reliably predict the quantum or timing of future impairments,” StanChart said.

Lower provisions helped it report an underlying pretax profit of $745 million, above the $502 million average of analysts’ forecasts compiled by the bank.

StanChart, which is focused on Asia, Africa and the Middle East, also struck a positive note when forecasting client demand, saying it expected improvement next year on the back of a faster-than-expected economic recovery in key markets including China and India.

“Lower interest rates continue to impact income but we remain well-positioned to meet our financial targets, albeit with some delay,” Chief Executive Bill Winters said in an earnings statement.

StanChart’s Hong Kong-listed shares (HK:) were down 1.8% after the results, underperforming the broader market.

The pandemic has brought on a perfect storm for many global banks, propelling them to cut costs and restructure further as bad loans mount, lending margins are squeezed and interest rates hit rock-bottom or even turn negative.

StanChart announced last month it would merge several businesses and cut its number of senior executives.

Both StanChart and rival HSBC (L:), whose shares have nearly halved in value this year, are also grappling with political uncertainty in Hong Kong – a key market for both of them.

StanChart said the lender was focusing on generating more fee-based income, particularly from financial markets and wealth management businesses, where it was seeing increased client demand, to offset the impact of low interest rate.

HSBC said on Tuesday it would embark on a pandemic-induced overhaul of its business model, seeking to flip its main source of income from interest rate to fee-based businesses.