Tuesday, February 26: Five things the markets are talking about

Global equities are trading under pressure in the overnight session, while sovereign bond prices have found a bid as investors pare back a portion of their initial euphoria surrounding the Sino-U.S trade talks. The (£1.3208) has found its ‘sea legs’ after U.K PM Theresa May is said to be considering a plan to delay Brexit.

PM May is expected to allow her cabinet to discuss extending the deadline beyond March 29 at a meeting this morning and then reveal the cabinet’s conclusions in an announcement to Parliament later (07:30 am ET).

On the central bank front, Fed Chair will deliver his semi-annual testimony on monetary policy and the state of the U.S economy over the next two-days (Feb 26/27) to House and Senate committees. In addition, several of his colleagues will also be speaking this week.

Elsewhere, prices have extended their losses after tumbling the most in over a month so far this week on criticism from President Trump that prices are too high.

In Japan, the share average closed a tad weaker overnight, under selling pressure ahead of Japan’s fiscal year-end in March. The Nikkei ended the session down -0.37%, while the broader shed -0.23%.

Down-under, shares have snapped a three-session winning streak overnight, with financials and resources stocks leading broad-based losses. The fell -0.9% at the close of trade, its worst session in nearly eight weeks. The benchmark rallied +0.3% yesterday. In S. Korea, the traded essentially flat at -0.15%.

In China, stocks fell overnight in heavy volume as a percentage of investors took profits on heavyweight financial shares, believing that Monday’s “spectacular surge” is unsustainable. The settled down -1.2% lower, while the fell -0.7%. The CSI300’s rise in yesterday’s session was its biggest one-day gain in three years.

In Hong Kong it was a similar story. Stocks fell, tracking other regional bourses, as investors waited to see if the U.S and China can clinch a trade deal. At the close, the fell -0.7%, while the China Enterprises Index lost -0.8%.

In Europe, regional indexes are following suit and trade lower along with Asia. However, the U.K’s is underperforming its regional counterparts, falling -1% as the sterling rallies against both the dollar and the EUR. 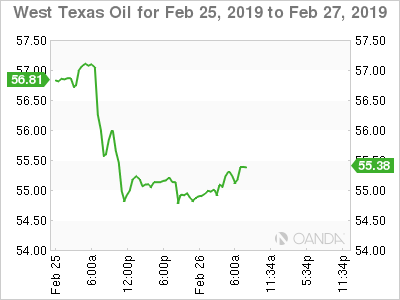 prices are again a tad lower, extending yesterday’s losses of more than -3% after President Trump called on OPEC+ to rein in its efforts to boost prices.

Aiding Trump’s tactics is the fact that oil markets were trading higher on Sino-U.S trade optimism. With some investors cashing in on the recent equity rally overnight have naturally put commodity prices on the back foot.

However, sanctions by the U.S against oil exporters Iran and Venezuela have contributed to the recent gains and should also provide a floor for prices.

Ahead of the U.S open, the ‘yellow’ metal is little changed despite President Trump stating that he would delay an increase in tariffs on Chinese goods. is flat at +$1,327.40 per ounce, while U.S are steady at +$1,329.9 per ounce.

Elsewhere, Palladium hit a record high this morning, surging above +$1,550 as a threatened strike by South African mineworkers added to supply concerns in an already tight market. 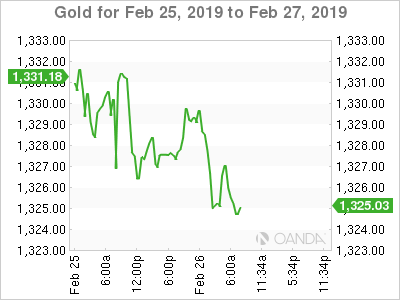 In this morning’s euro session, France’s government bond yield has dropped to its lowest level in over two years as the effect of the country’s “yellow vest” protests fade. Also aiding French bond prices is the fact that French President Macron’s popularity has recovered to levels not seen since the protests broke out three months ago.

Fixed income traders will take their cue from the Fed this morning (09:45 am ET). Fed chair Jerome will testify to the U.S Senate on the semi-annual monetary policy report before the Senate Banking Committee. Markets will be looking for signs on potential interest rate hikes this year and that U.S policymakers will stop running down the central bank’s balance sheet. 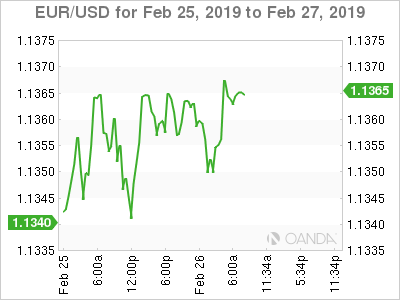 The pound is rallying after reports that U.K PM Theresa May is considering a plan to delay the country’s scheduled departure from the EU next month. Sterling (£1.3203) was recently +0.7% stronger against the U.S dollar.

With a little more than a month to go before the UK’s scheduled exit from the E.U, lawmakers have yet to settle on a deal with the bloc. Yesterday, the Labour Party said it would be prepared to back a second Brexit referendum, adding to uncertainty about the path the UK will take in the coming weeks.

Dealers have shifted their focus to Fed Chair Powell’s semi-annual testimony to Congress – will we hear more ‘dovish’ comments from the central banker? 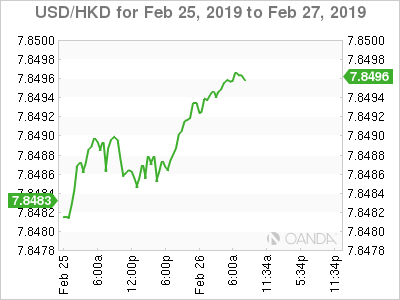 5. Hong Kong exports down for a third consecutive month

The headline print showed a -0.4% decline which was still better that the December -0.5% drop. 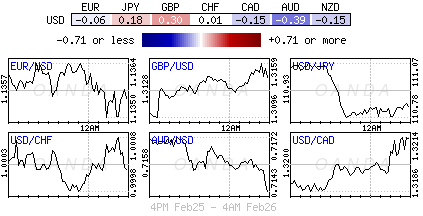