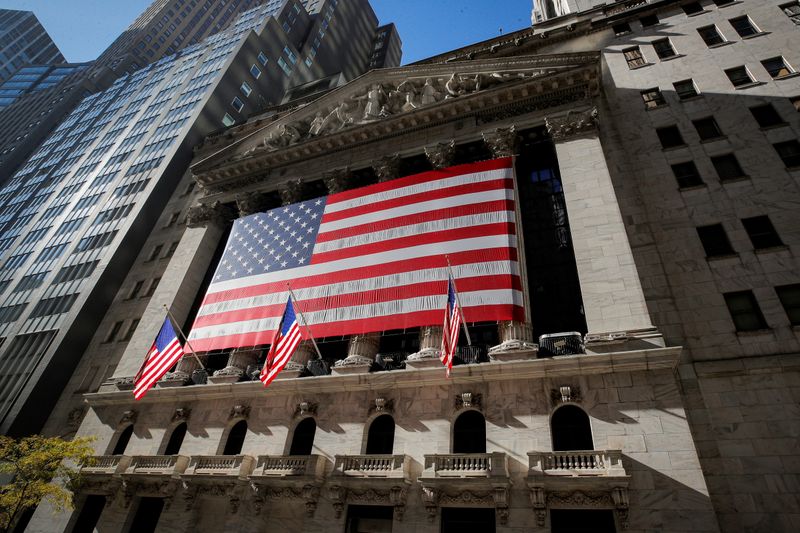 © Reuters. FILE PHOTO: The U.S. flag covers the front facade of the NYSE in New York

NEW YORK (Reuters) – As Treasury yields rally to multi-month highs, some investors are gauging how a more sustained rise could impact equity markets.

Yields on the 10-year Treasury, which move inversely to bond prices, rose to a seven-month high of 0.97% in the past week on hopes that breakthroughs in the search for a COVID-19 vaccine would eventually translate to a boost in economic growth.

That’s still low, by historical standards: yields are a full point below their levels at the start of January and below their 5-year average of 2.05%, according to Refinitiv data. The Federal Reserve has pledged to keep interest rates near historic lows for years to come in its bid to support growth, and past rallies in yields have faded in recent years.

Expectations that a vaccine against the coronavirus could fuel a broad economic revival, however, have also spurred bets that yields could continue edging higher. That could potentially weaken the case for holding shares that have become expensive during the S&P 500’s 58% rally from its lows of the year.

“If growth turns out better than anybody thought, the bad news is that the Fed might not have as much control over the extended curve,” said Ralph Segall, chief investment officer at firm Segall, Bryant & Hamill. “That would probably cause stocks to pause.”

Analysts at Goldman Sachs (NYSE:) this week forecast Treasury yields will hit 1.3% by the end of next year and 1.7% by 2022. They also raised their forecast for the S&P to 4,100 by the middle of next year, a roughly 16% gain from recent levels.

For now, analysts believe yields have some way to go before they become an obstacle to further stock gains.

The benchmark S&P 500 has climbed by an average of 1.37% a month during rising rate environments when the yield 10-year Treasury remained at 3% or below, according to Sam Stovall, chief investment strategist at research firm CFRA.

A gradual increase as the economy improves allows companies time to roll over or refinance debt, while a sharp jump higher is more likely to shock the market, she said.

Technology stocks, which have led the market higher this year, could be the first sector to feel the weight of higher rates, said Segall.

Rates moving above 1.5% “would suggest that growth was better than anybody thought” and pull investors into more cyclical areas of the market while potentially dimming the allure of tech-related names, he said.

Investors next week will have their eyes on earnings reports and forecasts from U.S. retailers to gauge how consumer demand is faring in the worst public health crisis in decades. The number of Americans filing new claims for unemployment benefits fell to a seven-month low last week, while consumer prices remained unchanged.

At the same time, Treasury yields are far from eclipsing the average 2.07% dividend yield of S&P 500 stocks.

Should yields grind higher, “a lot of investors would still see dividend payers as attractive because their yields are so much higher” than those offered by bonds while also offering capital gains, said Bill McMahon, chief investment officer for active strategies at Charles Schwab (NYSE:) Investment Management.

Plenty of investors believe rates are unlikely to rise much further.

An upward trend in rates will not likely be sustained until there are signs that the pandemic is being contained, either through falling infection rates or the widespread availability of vaccines, said Margie Patel, senior portfolio manager at Wells Fargo (NYSE:) Asset Management.

Until case counts fall, 10-year Treasuries are likely to remain in a trading range below 1.1%, she said.