Stocks Come Back To Earth After Monday Moonshot


The 12 Apollo astronauts who walked on the moon came back to Earth and reportedly didn’t know what could top that experience. Today, Wall Street finds itself in the same spaceship as those long-ago voyagers, with investors unsure what can eclipse the rocket ride that took markets to new highs Monday.

It’s possible this fight between the “stay at home” stocks and the “vaccine” stocks could continue to play out. That’s really what the next couple days are about, considering the lack of government data and major earnings news. We’ll see if the market can hold these lofty levels.

The epic early rally yesterday followed by big selling pressure later hinted at a few things: First, there’s still a lot of money on the sidelines ready to enter the market on positive news. Second, there’s plenty of resistance at current levels. And finally, areas of the market that may have overshot the mark—for better and worse—looked to be correcting themselves.

That goes both ways. For instance, Peloton (NASDAQ:)—one of the best-known “stay at homes”—was up more than 3% at one point overnight after getting slammed Monday. People got carried away yesterday, especially early on. That initial rally after the opening bell saw the market trading as if the vaccine were a done deal, with people hammering the “stay at homes” as if the virus would end in just a day or two. That’s obviously not the case, and a lot of the pullback later reflected investors coming to their senses.

Big handfuls of cash flowed into Financials and Energy yesterday—two of the most beaten-down sectors of the year. Investors are riding hopes of a recovery in crude demand and interest rates in the event that the Pfizer (NYSE:) vaccine really represents an economic turning point. No one expects that immediately. The news looks great in concept, but we need to see PFE and other companies execute tactically, and that could take a while. If it takes until spring or summer for the vaccine to get into widespread use, that means there could still be some strength for the PTONs of the world between now and then.

Though major indices spent a lot of Monday coming down from their early peaks, it was still a historic day. The Index, , and set new all-time highs. It’s interesting, however, that the SPX was unable to finish above its record closing level of 3580. That could indicate some investors think stocks got out ahead of their skis.

At one point Monday the SPX was up as much as 11.5% in less than six sessions, research firm Briefing.com noted. That presumably led to profit taking, maybe in part because the market still has to get through the new wave of coronavirus and uncertainty surrounding another stimulus package.

The mood changed late Monday as major indices mostly came back toward Earth just like the Apollo astronauts once did. That sort of a disappointing close could potentially spill over into Tuesday’s session, with technical weakness creeping in thanks to the major indices being unable to close above old highs.

That doesn’t mean we’re due for any long period of softness. Just that things can only go up so much before they have to come down. Even going into Monday, major indices were knocking on the door of new highs and had just delivered their best weekly performance since April. We’re not in some sort of fairyland where things only go up.

Investors get tired of being told to have patience, but this is really one of those times. The vaccine, if approved, is probably months away from widespread use. There’s a long winter of possible shutdowns ahead, and stocks are at all-time highs.

Having said that, “risk-on” sentiment appears back in town after a disappointing September and October. The election is behind us and there’s hope that the two parties can agree on some sort of stimulus between now and Jan. 1 and work together to achieve something for the economy.

The bond market is on the defensive, with the 10-year yield above 0.9% this morning even if it couldn’t hold onto its best levels Monday (see more below). The yield is within striking distance of 1%, and if that happens, the Financials could come back out to play. Also, the Cboe Volatility Index () is under 25, another sign of “risk-on” still being the flavor of the day.

Six months ago, it felt like everyone was piling into FAANGs, semiconductors, and mega-caps. Now, people entering the market have their eyes on the sectors that got ignored most of the year. Energy and Financials could have more room to run from a valuation standpoint, but they also make up a much smaller percentage of the big indices from a market cap standpoint. That means their victories might not be as evident across the broader market.

One third-party analyst on the TD Ameritrade Network* yesterday said his research showed that growth stocks were up 20% year-to-date vs. value stocks being down 13%. That’s the biggest dichotomy he’s seen between them since the dot-com era year of 1999. It speaks to a possible need for more balance, which the market does tend to provide if you wait long enough.

It’s healthier when market strength crosses more boundaries, as opposed to just a few stocks like Apple (NASDAQ:) and Microsoft (NASDAQ:) propelling things higher on their own with those $1 trillion-plus market caps. That’s why it’s possibly a good thing if Financials, Energy, transports, small-caps, and travel stocks can keep up this momentum. It’s just that it could be hard to do that when a long slog still lies ahead as we wrestle with the virus over these winter months.

You can probably see a pattern there in that all of these companies would likely do better in a “reopening” economy where people are traveling again and banks are lending money at higher rates. The banks, especially, seemed to enjoy a lot of pent-up demand on Monday.

The stocks that did worst to start the week? Those that benefit when you stay at home, including a 20% crushing for shares of PTON. Most of the stay-at-home “darlings” got treated the same yesterday. Amazon (NASDAQ:) and Netflix (NASDAQ:) both took a pounding. 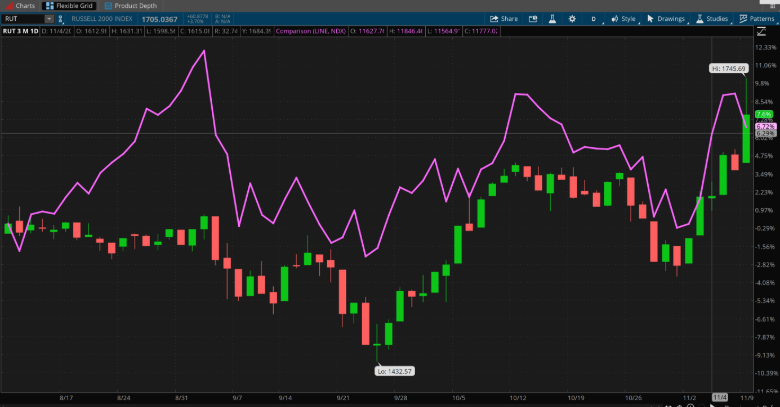 Chart Of The Day: Playing Catch Up

The has generally outperformed the Russell 2000 small-cap index (candlestick) over the last three months, as this chart shows. However, things started to change last week, with the NDX going flat and RUT gaining ground quickly on hopes of a boost for the domestic economy with the election drama behind. The process accelerated on Monday amid positive vaccine news that also might help some of the smaller firms that can’t depend on sales in the “cloud” to save them from coronavirus.

October and Investors: Monday brought the latest Investor Movement Index® (IMXSM), which is TD Ameritrade’s proprietary, behavior-based index to measure what investors actually were doing and how they were positioned in the markets. Last month, the IMX decreased slightly to 5.69, down 0.35% from its September score of 5.71. The reading for the five-week period ending Oct. 30, 2020, ranks roughly in the middle compared to historic averages.

In October, clients maintained almost exactly the levels of exposure they held in September. While these scores remain among the highest of the year to date, they point to the continued impact of volatility on retail investors’ behavior. Generally, investors remained net buyers of equities overall, maintaining but not wanting to expand exposure heading into an election. In the areas where they were willing to take risk, they did demonstrate a preference for Consumer Discretionary, Information Technology, and Energy stocks.

Bond Selloff Underpins Yields, But Barriers Remain: For months, it seems, every time the yield went up a little you heard people asking, “Can it hit 1%?” So far, the answer has been no, except for a very brief spurt above that benchmark back in March when everyone was running around like chickens without heads looking for a place to hide as the pandemic struck. Now, it feels like there’s a better chance. The 10-year yield hit 0.95% on Monday for the first time since late March, but missed out on the gold ring, stopping just shy of 100 basis points. While it might get to 1.0% before long, barriers still could block a major yield rally.

First of all, it’s notable that the benchmark German yield actually fell a basis point Monday while the U.S. 10-year yield climbed 13 basis points at times. Low yields abroad could continue to dog the U.S. yield by attracting overseas investors into U.S. Treasuries. Then there’s the U.S. Fed and its vow to keep rates at virtually zero for years to come, and its continued injection of new funds into the bond market.

That’s hard to fight if you’re an investor. For now, it’s going to be tough to make much yield in Treasuries, so stocks could still have the upper hand vs. fixed income despite their nose-bleed levels. It’s interesting to note that Utilities, often seen as a “bond proxy,” did just fine on Monday despite the rise in Treasury yields. If investors truly thought the 10-year was going to take a quick ride to 1.5% or 2%, it’s hard to believe they’d find Utilities all that attractive.

Is the Great “Stay-At-Home” Rally of 2020 Over? Not by a long shot. It’s just reined in a bit. Even taking Monday’s selling into account, it’s been an amazing year for many of these stocks like PTON and Zoom (NASDAQ:). Life might get back on a more normal track next year, but the pandemic has changed a lot of perspectives. There’s still going to be many companies that found they could save money by canceling business trips and using ZM for meetings, and many people who decided they love PTON’s products and would probably buy another one someday instead of a gym membership. Life is different now. A vaccine—if it works and is widely available—doesn’t change that.

As some analysts point out, the pandemic might have just accelerated some trends that would have happened anyway. The only problem now for investors is that many of the stay-at-home names look pretty expensive from a stock valuation standpoint. Yesterday’s rollback removed some of the massive premium that got built in, but the question is how much more might need to come out.