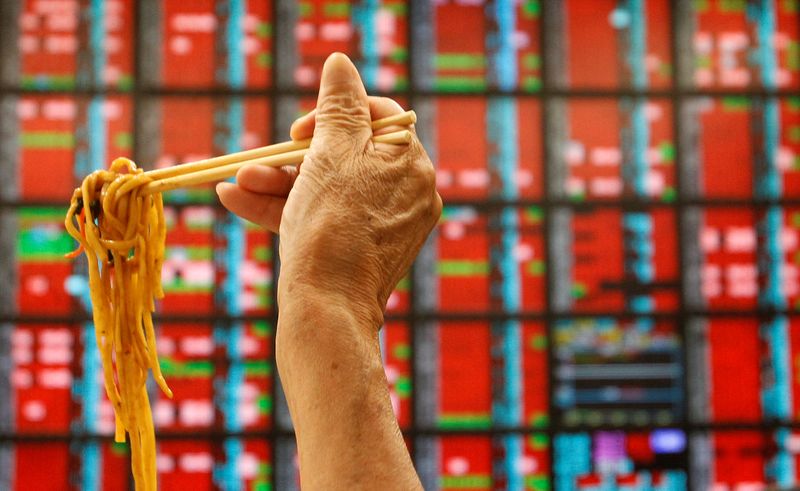 © Reuters. FILE PHOTO: A man eats his lunch of noodles while monitoring stock market prices inside a brokerage in Taipei

The Democratic candidate’s victory at the U.S. Presidential election was largely priced in by markets, which had been trading with the view of a Biden presidency and a Republican-controlled U.S. Senate late last week.

E-mini futures for the S&P 500 jumped 0.6% on Monday, signalling a positive start for U.S. markets.

MSCI’s broadest index of Asia Pacific shares outside of Japan inched up 0.1%, after climbing 6.2% last week to clock its best weekly performance since early June.

“What appears to be divided government at this point provides more continuity of the current environment rather than the potential for wide-sweeping changes,” said wealth manager Jim Wilding at Confluence Financial Partners in Pennsylvania.

“We view this is as a net positive for equity markets, particularly in this scenario given it puts the odds of higher taxes very low in the years to come,” he added.

Wilding added a word of caution though with the S&P 500 not far from all-time highs.

“While we remain positive over the intermediate term outlook and believe divided government reduces the chances of a bear case scenario playing out, we would refrain from unbridled enthusiasm at current levels,” Wilding said.

Equities rallied hard last week, with the S&P500 up 7.3%, clocking the best gains in an election week since 1932, according to National Australia Bank (OTC:) analyst Tapas Strickland.

Matt Sherwood of Australian fund manager Perpetual, however, said Biden’s victory did not necessarily warrant a tweaking of his portfolio.

“In the end we think the U.S. economy is still fairly fragile and growth’s slowing down,” Sherwood said.

“You could potentially gravitate your portfolio more towards higher-beta type markets, such as emerging markets, and there is potential for better prospects in the energy space than would have been the case with a Democrat clean sweep.”

Analysts also warned the road might get tougher from here as investors focus on Biden’s ability to expand fiscal stimulus and measures to reduce the spread of COVID-19.

A fiscal stimulus plan is still possible despite a divided government, analysts said, though a larger package is less likely. That puts the spotlight on the U.S. Federal Reserve to do more to bolster the world’s largest economy.

As a result, the dollar has weakened in recent days while growth proxies such as the Australian dollar have rallied with the Biden presidency seen less likely to be confrontational on trade.

The dollar was a shade weaker against the Japanese yen at 103.25, after slipping about 1.3% last week.

Investor focus will also be on sterling and the euro this week with UK-EU trade negotiations coming to a head with the EU summit on Nov. 15.

Later in the day, the Bank of England chief economist will give a speech on ‘The economic impact of coronavirus and long term implications for the UK’.

In commodities, oil prices ticked up a bit after losses on Friday but stayed below $40 a barrel as rising global coronavirus cases stoked fears about lacklustre demand.