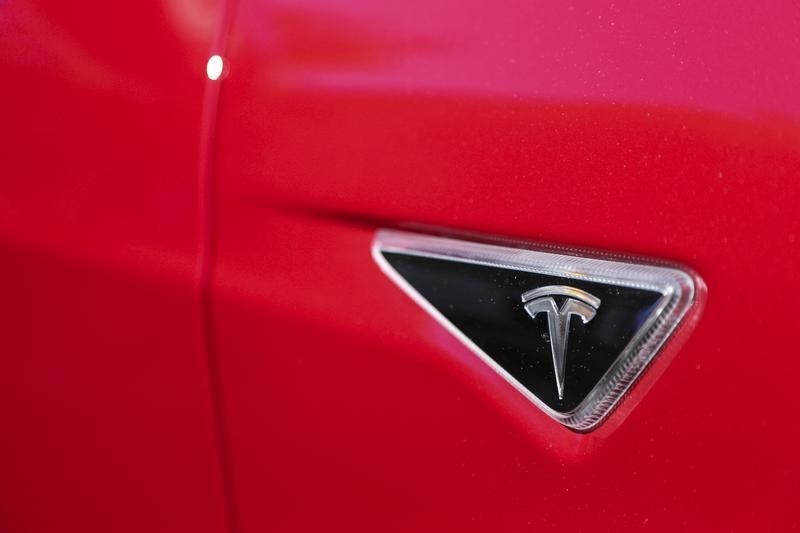 Investing.com — Tesla (NASDAQ:) makes it into the Promised Land, Stocks retrace a little from record highs posted in the wake of Moderna (NASDAQ:)’s vaccine announcement, U.S. retail sales and industrial production are both due, and OPEC’s technical experts meet to review the oil market. Here’s what you need to know in financial markets on Tuesday, Novermber 17th.

Tesla has made it into the promised land. From December 21, Elon Musk’s electric car company will be admitted to the , from which moment the $11.2 trillion of funds which are benchmarked to the index will have to include proportional exposure to the stock.

S&P Dow Jones Indices said that because of the company’s size – at over $400 billion it’s the most valuable company ever to be admitted to the index – it will hold a consultation as to whether to incorporate it in two stages (on December 14th and 21st ), rather than one.

This is the moment that the retail investor bulls who drove the stock’s giddying rally earlier this year have been waiting for: the opportunity to sell to a person or robot who has no choice but to buy. Despite being widely anticipated by that rally, the news still pushed the stock up 12.5% in premarket trading to within 10% of its all-time high.

2. Trump tries to leave his mark on Afghanistan, Alaska and the Fed

President Donald Trump continues to make life as hard for the incoming administration as possible. The Wall Street Journal said the outgoing administration is drawing up plans to order a further drawdown of U.S. troops in Iraq and Afghanistan by January 15, five days before he leaves office.

Senate Leader Mitch McConnell said the move would be a boon to Al Qaeda and the Taliban, and an abandonment of the Afghan government that is fighting the Taliban. He compared it to the U.S. withdrawal of Vietnam in 1975.

In addition, the Interior Department is finalizing orders to allow oil development in the Arctic National Wildlife Refuge in Alaska, something that President-elect Joe Biden has vowed to block.

Trump’s plan to fill the Federal Reserve’s board with loyalists, however, faces resistance. On Monday, Lamarr Alexander became the third GOP Senator, after Mitt Romney and Susan Collins, to say he wouldn’t vote for Judy Shelton’s nomination to the Fed’s board of governors.

U.S. stocks are set to open slightly lower, retracing some – but by no means all – of Monday’s surge that took both the Dow Jones and S&P 500 to new record highs.

Walmart and Home Depot (NYSE:) lead a thin line of companies reporting Monday. Home Depot got the ball rolling with earnings that beat expectations by just under 4%, chalking up another victory for the skill of expectation management.

Also in focus will be Warren Buffett’s Berkshire Hathaway (NYSE:), which said after the close last night it had bought stakes in four big pharma companies – Pfizer (NYSE:), Abbvie, Merck and Bristol Myers (NYSE:) Squibb. All four have seen sales of their key products suffer this year as Covid-19 has disrupted treatment schedules for other ailments.

The economic data calendar is headed by the release of industrial production and retail sales data for October, at 9:15 AM ET and 8:30 AM ET, respectively.

Industrial output fell in September for the first time in five months, but is expected to return to growth with a rise of 1.0% last month.

Retail sales, meanwhile, are on a five-month winning streak, after picking up to a 1.9% increase in September. As they account for a much bigger part of the U.S. economy, the market will be looking particularly closely to see whether this trend can be sustained.

The so-called OPEC+ bloc of oil producers will hold a virtual meeting of technical experts to review the state of the oil market, two weeks before its ministers decide on the bloc’s output policy for the coming months.

The meeting of the ‘Joint Technical Committee’ will take no decisions on output policy, but its recommendations will naturally carry a good deal of weight. The open session of the meeting starts at 8 AM ET.

Ahead of the meeting, both Saudi Arabia and Russia have hinted heavily at their readiness to postpone a planned production increase of nearly 2 million barrels a day that is scheduled for the start of next year. There are fears that global demand will not be strong enough to absorb the increased supply.

Elsewhere, the American Petroleum Institute will report its U.S. inventory data for last week. Traders will be looking to see which way the contradiction implicit in the API and governments reports last week will be resolved.

Facebook
Twitter
Pinterest
WhatsApp
Previous articleMost consumers unlikely to spend more because of vaccine: survey By Reuters
Next articleIran says U.S. move against it would face ‘crushing’ response By Reuters