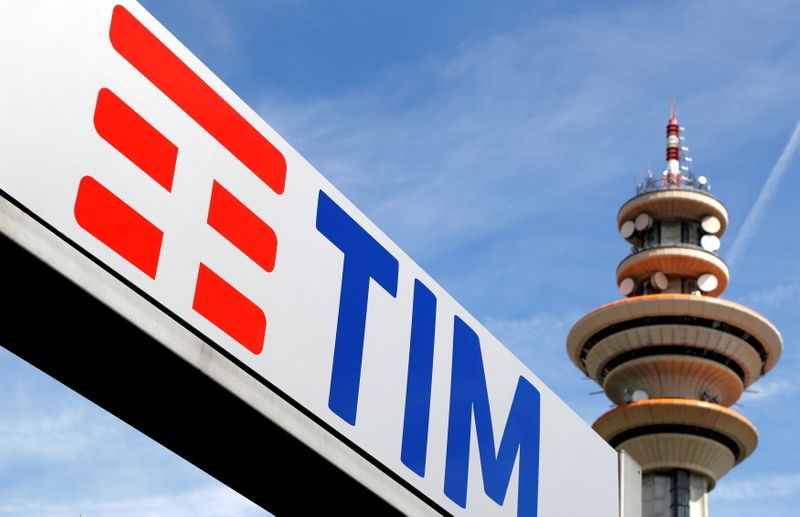 © Reuters. FILE PHOTO: Telecom Italia’s logo is seen at its offices in the Rozzano neighbourhood of Milan, Italy, May 25, 2016. REUTERS/Stefano Rellandini

By Elvira Pollina and Agnieszka Flak

MILAN (Reuters) -Shares in Telecom Italia (MI:) (TIM) fell as much as 7.9% on Thursday to an almost one-year low after Italy’s biggest telecoms group further cut its 2021 core profit guidance to reflect worsening conditions in its domestic market.

Like other European peers, TIM is grappling with aggressive price competition in its crowded home market, which accounts for nearly 80% of group sales, and is facing the upcoming entry of low-cost French rival Iliad into the fixed-line business.

TIM said it expected its earnings before interest, tax, depreciation and amortisation after leases (EBITDA-AL) to post a mid-single digit drop this year, compared with a previous forecast for a low-to-mid single digit decline.

The group said in July it would fail to stabilise core profit this year.

Banca Akros analysts said in a note the guidance cut, while not completely unexpected, “signals a difficult scenario and will trigger further estimates downgrades”.

A source close to Vivendi said on Wednesday the company remained committed to TIM despite the disappointing results.

Gubitosi hopes to tackle some of the domestic challenges by developing so-called adjacent business units, such as cloud, cybersecurity and Internet of Things ventures and is considering options for its portfolio of services and network assets, including potential alliances and new investors.

The company said its board had discussed a possible reorganisation on Wednesday to extract value from the group’s assets and had asked Gubitosi to continue study options.

“More pressing, in our view, is a clearer plan for stabilising core activities, including a constructive response to Iliad’s inevitable broadband entry,” Jefferies (NYSE:) analysts wrote in a research note.