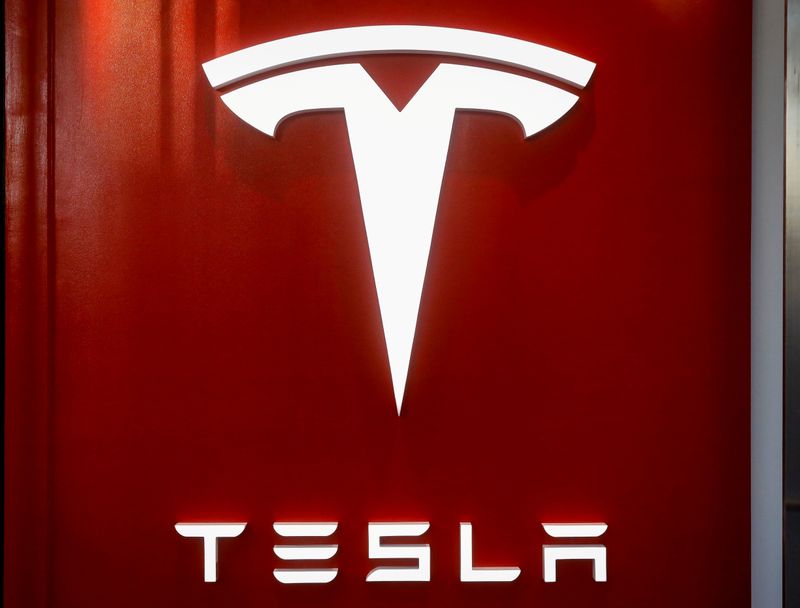 © Reuters. FILE PHOTO: The Tesla logo is seen at the entrance to Tesla Motors’ showroom in Manhattan’s Meatpacking District in New York City

(Reuters) – Tesla (NASDAQ:) shares rose 6% on Monday, approaching a $500 billion market value and extending gains to 27% since news a week ago that the electric car maker will debut in the in December, forcing index funds to buy billions of dollars of its stock.

Up about 500% in 2020, Tesla has become by far the world’s most valuable automaker, despite production that is a fraction of Toyota, Volkswagen (DE:) or General Motors (NYSE:).

Graphic: Tesla in the S&P 500: small profits in a big pond, https://graphics.reuters.com/USA-STOCKS/TESLA/xlbpgzznyvq/chart.png

Tesla is now five times more valuable than GM and Ford combined and the latest rise in the Silicon Valley automaker’s shares came after Wedbush analyst Daniel Ives bumped his price target to $560 from $500.

While he maintained his neutral rating, Ives also said the stock could hit $1,000 in a “Bull Case”, reflecting steeper demand for electric vehicles in coming years.

However, the median price target of analysts covering the stock is $385, about 26% below the $519 it hit on Monday, reflecting a belief among many on Wall Street that Tesla’s shares have become overvalued.

Index funds trying to match the S&P 500’s performance will have to buy more than $50 billion of Tesla’s stock ahead of its inclusion on Dec. 21, and Goldman Sachs (NYSE:) estimated last week that actively managed mutual funds could buy another $8 billion.