appears to have shrugged off the uncertainty in the cryptocurrency markets after rebounding strongly.

Tezos has broken out into the NFT market, and it appears that investors have noticed. XTZ has managed to rebound strongly after a steep correction, which could lead it toward new all-time highs.

Tezos appears to have a bright future ahead of it after making a name for itself as an eco-friendly NFT blockchain.

Non-fungible tokens have become a hit on Tezos, with rap superstar Doja Cat launching her genesis collection on the OneOf platform earlier this month. Earlier in the year, F1 racing teams McLaren and Red Bull Racing also launched NFT on Tezos, citing the chain’s low carbon footprint as a primary reason for choosing it over its competitors.

The XTZ token appears to have been developing a head-and-shoulders pattern on its daily chart since mid-April. The so-called “ killer” is currently forming the right shoulder of the bullish formation.

Further increases in buying pressure could push Tezos above the head-and-shoulders’ neckline leading to significant gains. Slicing through the $7.20 resistance barrier might ignite a new 70% bull run toward $12.25.

This bullish target is determined by measuring the height between the pattern’s head and neckline and adding that distance to the breakout point. 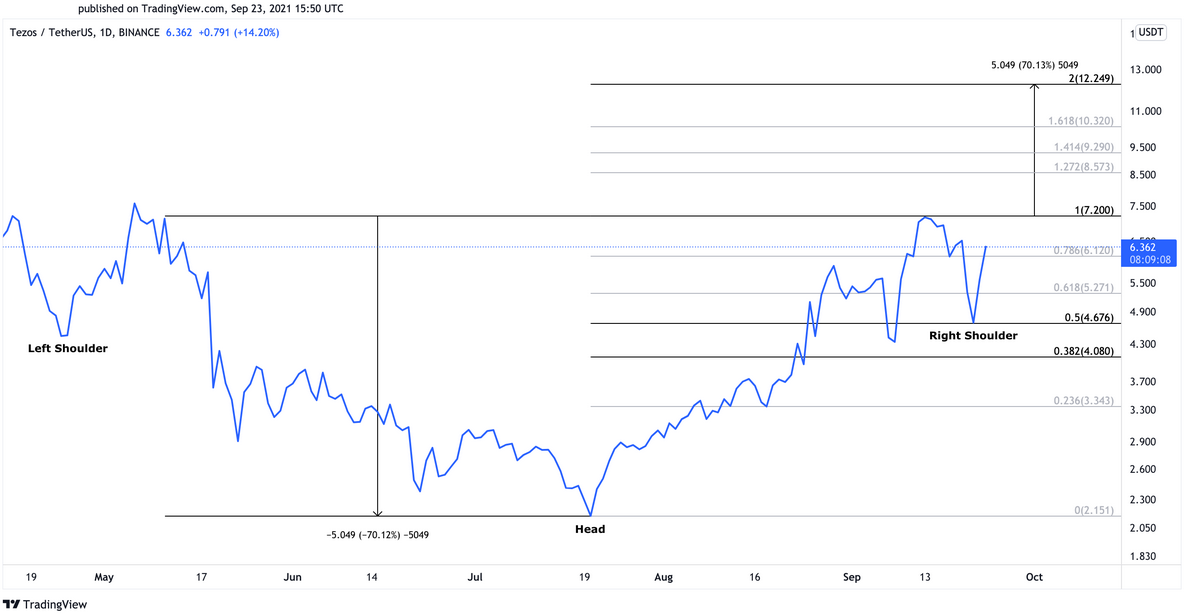 It is worth noting that if Tezos fails to break through the head-and-shoulders’ neckline at $7.20, a rejection might occur, leading to a spike in selling pressure. XTZ would then retrace, but it would need to hold above the $4.70 to $4.10 price pocket for the bullish outlook to remain intact. Failing to keep this interest area as support might result in a steep correction to $3.30.